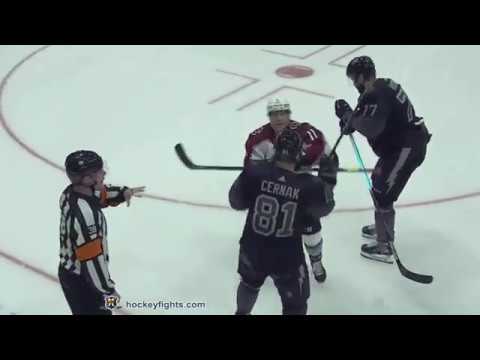 Matt Calvert of the Colorado Avalanche

The Tampa Bay Lighting goaltender, Andrei Vasilevskiy freezes the puck as Matt Calvert comes in close and engages with Erik Cernak. The two go chest to chest before beginning to joust a bit and then the gloves come off.

Cernak throws a right first and Calvert ducks to avoid that before another right from Cernak misses the mark and they tie up. Cernak gets off one more quick right underneath before they fall to the ice. Calvert briefly regains his footing and looks to continue the fight but the linesmen step in as Cernak rises again.

For Calvert, this was his first fight of the season. His last fight came in the 2018-19 season on March 3rd, 2019 against J.T. Brown of the Minnesota Wild.

For Cernak this is his first fight of the season. His last fight came in the 2018-19 season on March 3rd, 2019 against Tom Wilson of the Washington Capitals.

This was the 3rd fight of Cernak's 66 games in the NHL.