Hockey Fights is an entertainment site with no direct affiliation to the National Hockey League, its teams, or NHLPA
Home > Originals > The Enforcer Olympics – Vegas Golden Knights

I’m gonna give it ev’rything I’ve got

Let me shoot a seven with ev’ry shot, ah

For the 3rd installment of our inaugural Enforcer Olympics, we head to beautiful Sin City. While they haven’t been around as long as the rest of the league, the Knights have still had some pretty tough dudes don the black and gold, and of course their slick white uniforms. We all know that the Enforcers will never get the credit they deserve for the difficult job they do, but that’s what hockeyfights.com is for: recognizing, celebrating, and giving some much-deserved credit to our unsung heroes. Now let’s see who secured their spot on the Enforcer Olympics podium.

Our bronze medalist is none other than Will Carrier. The former Cape Breton Screaming Eagle was part of the original 2017-18 Vegas crew. Carrier appeared in 10 playoff games as the Knights made their remarkable Stanley Cup run in their inaugural season. The Quebec native appeared in the prestigious Quebec International Pee-Wee Hockey Tournament and was lauded as a top-30 prospect heading into the 2013 NHL Entry Draft. Alongside Ryan Reaves, the two combined for an uncanny 583 hits during their sophomore year in Vegas and put the league on notice that, when healthy, they are one of the toughest 4th-lines to play against. 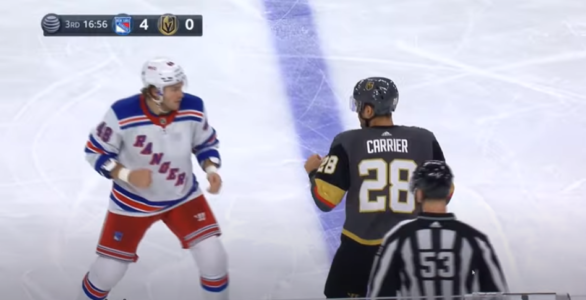 I think it’s fair to say that during the Knights’ second-period battle against the Rangers, there was no malicious intent to Brendan Lemieux’s elbow to Cody Glass. But hockey fans know that when your teammate gets knocked out of the game, someone has to answer the bell. While our bronze medalist waited until the 3rd-period to force Lemieux to atone for his indiscretion, it’s obvious that he wanted to dance as soon as he could. When the two finally squared off, Carrier showcased his boxing-prowess by shifting from a southpaw to an orthodox stance. The stance-shift didn’t start well, because Lemieux immediately landed a big right hand. Luckily, Carrier wasn’t fazed, quickly tore Lemieux’s helmet off and responded with a few overhand rights of his own. Unfortunately for fight fans, the number of big blows was limited due to their strong grappling skills. With his team up by four, credit to Lemieux for agreeing to the scrap and to our bronze medalist for going-to-bat for his injured teammate. The judges would call this a draw, but win-or-not, I doubt Carrier had to buy any drinks when the boys went out.

Just like in the aforementioned scrap, Carrier’s teammate got rocked and he made sure to hold the opposition accountable. In this bout, the two squared up at center-ice. Approaching the battle with a specific fight-plan, it looked like Carrier had clearly done some scouting on Liambas. Carrier boasted a 3-inch reach advantage over Liambas and knew the Ducks’ forward would need to get inside to do any sort of damage. That’s why it was interesting to see our bronze medalist wait… wait… and wait some more before finally tossing the equivalent of a superman-punch on skates. But it’s tough to land a big blow like that and the Knights’ tough-guy only hit air. The two then proceeded to trade a series of jersey-jabs before they both landed some huge overhand right-hooks. The battle ended abruptly when Carrier got caught with his head down, forcing the referees to jump-in before either fighter was ready to stop. Popping in three unanswered goals in the 3rd period and cruising to a 4-2 victory, Carrier and the Knights had the last laugh that Wednesday night in California.

Our silver medalist started his career in Vegas and, after 11 seasons, announced his retirement there. Engelland began his playing career with the Las Vegas Wranglers of the ECHL, and has maintained his residence in the desert ever since. That’s why it was so beautiful to see the gritty defenseman be selected by the Knights during the 2017 NHL Expansion Draft. While the Alberta native didn’t drop-the-gloves too many times in Vegas, those familiar with Engelland during his time with the Penguins and the Flames know how tough and intimidating he was when he did. After hanging up the skates, the newly retired defenseman took a position to work with the Knights in a special assistant role. Considering Engelland won the Mark Messier Leadership Award after Vegas’ inaugural season, it should be no surprise that his focus will be on expanding the Knights’ charitable efforts in the community. Engelland radiates good energy and always gave more to the team than he ever took out of it. Let’s celebrate our silver medalist! 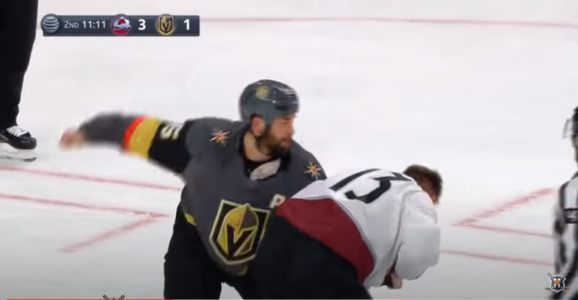 This was far-from Valeri Nichushkin’s dream shift. First, he got absolutely rocked in front of the net by Max Pacioretty, and then took a beatdown from our silver medalist. Engelland was clearly trying to give his team a jolt and, if the volume at the T-Mobile Arena was any indication, it worked. Once these two finally squared up, Engelland was easily able to knock the Russian winger’s helmet off and land two strong jersey-jabs. The assistant captain followed that combo up with three massive overhand rights that sent Nichushkin cowering to the ice. The amazing part of this bout is how calm Engelland was the entire time. He looked more like he was about to go on a dinner date than throw-down in the desert. Fortunately, Nichushkin was able to tally two points, get the win and redeem himself for the beatdown he took on the scoreboard. Believe it or not, Nichuskin hasn’t dropped the gloves since. Believe it.

The penalty summary may list this is scrap as just a roughing penalty, but Zach Sanford’s face begged-to-differ. While the majority of this scrum was just a few gloved-punches, pay close attention around the 1:28 mark of the video. Clearly, Engelland had no intention of letting the scrum end without tossing some big jabs to the chin of the Blues’ forward. Say what you want about our silver medalist, but my goodness, that man always had poise. I’m guessing that’s because when you fight the likes of Colton Orr, Chris Neil, and Brian McGrattan throughout your career you don’t get the luxury of being nervous. Whether you attribute it to the scrum or not, the Knights fired in four straight unanswered goals immediately after this mix-up. Spurring them to a thrilling 5-4 overtime win. You’d be hard-pressed to find a player who’s sat in a dressing room with Engelland and wouldn’t praise the Alberta native’s leadership qualities. It’s an exciting new chapter for Engelland, and Las Vegas will surely reap the benefits for many years-to-come.

Whether you call him Reavo, the Muffin man or Mr.7Five, Ryan Reaves is officially the gold medalist of the Vegas Golden Knights Enforcer Olympics.  I doubt there will be many arguing with this selection, considering he’s been an absolute monster since the moment he landed in Sin City. As detailed in his feature during the Enforcer Advent Calendar, Reaves is always a class-act. He doesn’t jump guys or take cheap shots. He just squares up and throws down, proving that he is truly the last of a dying breed. His class extends off-the-ice and is demonstrated by his powerful speech that addressed racial injustice and donating all the proceeds from his 7Five craft beer line to support CoVID-19 relief in Las Vegas. Further, the tragic overdose of Scott Oake’s son, Bruce, who was a lifelong friend of Reaves, inspired the Oake family to start a foundation to offer other families affected by addictions the support needed to prevent a similar tragedy. With a thoughtful tattoo dedicated to his fallen friend, Reaves has been a regular contributor to the foundation. With his charisma, confidence and playful nature, there wasn’t a chance in hell he wasn’t getting the Gold Medal. 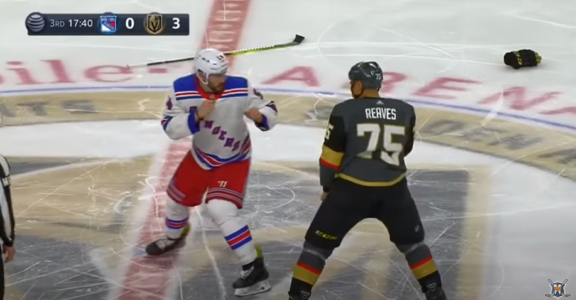 I don’t think there’s been a player since the 90s that likes to square off at center-ice more than Reavo. Maybe that’s why he’s one of the only showmen still in the game. In this bout with McQuaid, the Rangers big-man landed a series of jersey-jabs and looked like he was going to get the jump on our gold medalist. But we all know you don’t get the top-spot on the podium without a little adversity. Reaves responded back like a champ with some hammer rights that sent McQuaid off-balance. That’s when the Winnipeg native rained down some monster shots to the back of McQuaid’s head before tossing him to the ice. Some people may have a problem with a little cockiness, but, from the sound of the T-Mobile arena, they love when Reaves signals for them to get off their feet. The least we can all do is make some noise for our modern-day gladiators.

Wouldn’t you love to know what these two giants were talking about on the opening draw that Saturday night in Vegas?? Well, Adam Hill from Las Vegas Review-Journal solved the mystery. Reaves revealed that “He asked me to go and I said, ‘Let me go run somebody first,’ and Johnston responded ‘(Tyson) Fury is here.’ I just said, ‘Yeah, that’s true. All right, we’ll do it.’” The two gladiators ensured The Gypsy King and the rest of Vegas got to start their Saturday night off right. Both fighters took their time to engage by posturing for position. Thankfully for fight fans, the linesmen were too slow to get in after Johnston lost his balance ducking a right from Reaves. The two enforcers then locked up and exchanged some body blows. With a series of jersey-jabs, Reaves took advantage by getting Johnston’s visor off. Credit to Johnston for standing in and landing a few rights of his own. But in this modern era, Reaves’ power remains unmatched, and after he connected with a massive right-hook, the linesmen had no choice but to intervene. Only in hockey would you get the opportunity to watch two heavyweights trade blows, while the heavyweight boxing champion of the world cheers in the crowd. Viva Las Vegas.

This concludes the Vegas Golden Knights edition of the Enforcer Olympics. It’ll be interesting to see who takes the mantle after these two leave, but whoever it may be they will get to play in front of one of the best crowds in the NHL. Tune in next week when we head to Long Island to see who gets to stand on the podium for the New York Islanders.