Hockey Fights is an entertainment site with no direct affiliation to the National Hockey League, its teams, or NHLPA
Home > Originals > The Enforcer Olympics – Tampa Bay Lightning

Despite boycott calls and COVID outbreaks, China seems adamant that the 2022 Winter Olympics will be a go. However, the uncertainty has made us here at Hockey Fights consider an alternative – The Enforcer Olympics. While many of our Enforcer medalists never had the opportunity of being awarded Olympic hardware, they ensured the safety and protection of those that were so fortunate. Well, it’s their time now! That’s why every week we will award a Bronze, Silver, and Gold medal to each team’s all-time enforcers. And what better way to kick the Enforcer Olympics off than with the defending Stanley Cup Champions.

Our Bronze medalist is none other than Rudolph Leopold Poeschek, or as his friends call him, “Pot Pie.” The British Columbian native played 12 seasons in the NHL, 4 of which with the Tampa Bay Lightning. Poeschek earned this medal by dropping-the-gloves with some of the toughest enforcers of all-time. Jay Miller, Gord Donnelly and Basil McRae to name a few, but when you hold your ground against the G.O.A.T, it would be blasphemous not to have a spot on the podium. 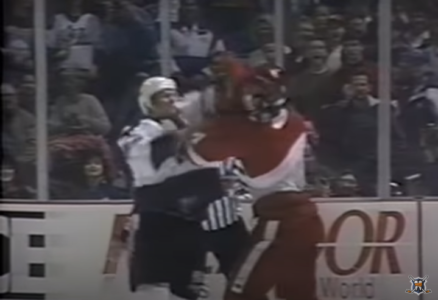 The two had no option but to square off at the end of the first period after Probert delivered a solid cross-check to Poeschek’s jaw. It’s amazing seeing how calm Probert was as he casually kicked their sticks aside to square off with the Tampa Bay enforcer. Poeschek started the bout strong with two strong left hands while jerseying the Wings legend. However, as it was in the 90s, it was far more advantageous to get your jersey off than tie it down. I guess Probert must have “forgotten” to tie his jersey down that Wednesday night in the Thunderdome. A large reason why Poeschek earned this Bronze medal was his willingness to stand and trade with a monster that he couldn’t even grab a hold of. That right there folks…is what a true enforcer does.

Defense? Who needs that nonsense? These two heavyweights equalled each other not only in size but in heart, which is why they gave the fans in D.C. an absolute brawl. While their teammates were in a mini-scrum in front of the net, the two enforcers stared each other down near the right circle. After a brief display of their shadow boxing skills, the two grabbed hold of one another and started tossing bombs. They both traded a few jabs, until Poeschek decided to add a little uppercut to the party. Berube responded with one of his own which looked to have cut the former Kamloops Blazer. It was tough to even hear the announcers over the deafening roar of the crowd, which really makes you miss ol’ time hockey doesn’t it? Rudy Poeschek deserves more than just a bronze medal, but it’s the Olympics and someone has to finish 3rd. Regardless of his ranking, he was an absolute warrior for a less than stellar Lightning team and fought some of the greatest legends to ever lace ‘em up. Fortunately for fight fans, he will always remain in the history books as a member of the first Tampa Bay Lightning team to ever make the playoffs. Congrats to the man they call Pot Pie.

Despite playing only one full season with the Tampa Bay Lightning, the Ontario native still holds the single-season record for penalty minutes with 265. “Zenon the Destroyer” certainly lived up to his nickname during his tenure in Tampa when he literally fought anyone he could get his hands on, whether they wanted to, or not. The former Ottawa 67 was never drafted, but he persevered and grinded his way to the NHL like many enforcers had done. After a couple of brief stints in Anaheim and Columbus, The Destroyer found his home in Florida and has earned himself a well-deserved Silver medal in this year’s Enforcer Olympics. 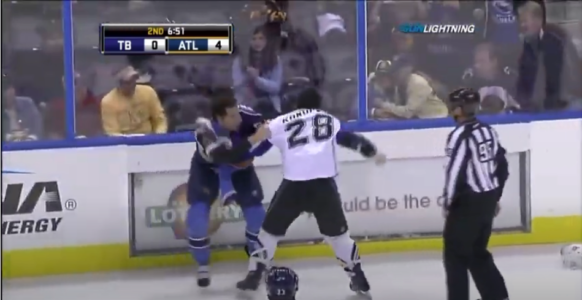 I personally don’t want to imagine scrapping someone 15 pounds heavier than me, guess that’s why The Destroyer is standing on the podium and not me. Like the true Silver medalist he is, Konopka didn’t hesitate challenging the bigger Chris Thorburn when his team was down by four. In this bout, The Destroyer utilized some Rob Ray-esque overhand punches, and it worked out well for him. The bigger Thorburn was never able to get himself set. While neither heavyweight was able to land any clear blows, the jobs enforcers are to jumpstart their team. After this bout the Lightning were able to rattle off three straight goals to keep the game close. They may have fallen short in a 6-3 loss in their first game of the season, but at that moment everyone on that Lightning bench knew they had a guy willing to drop-the-gloves for them, no matter how big the opponent was.

Even though his coach Rick Tocchet may not have loved it, Chris Neil wanted to dance with Konopka, and following the enforcer code means dropping-the-gloves even when your team’s up by two. But having said that, Konopka may have just wanted some redemption for his loss to Neil the year prior. Regardless, fight fans got to enjoy a good tilt between two gladiators that Thursday night. The two started off grappling for position until Neil was able to get Konopka’s helmet off and land a few right jabs. Konopka responded back with some overhand rights, but they only landed on Neil’s helmet. The two jostled until they ended up against the boards where the fans gave their hometown enforcer some motivation by banging mercilessly against the glass. The linesmen quickly jumped in and you could tell Konopka was absolutely livid with either Neil for trying to fight his teammate or the linesmen for jumping in early. This second-round matchup may have ended in draw, but the Bolts got the last laugh as they gave the fans a 5-2 win at home.

It’s always difficult to judge enforcers because we only see their impact on-the-ice, but it is quite often their influence in the dressing room that is more meaningful. André Roy remains one of the most popular players to ever put on a Tampa jersey and, being part of the 2004 Stanley Cup squad, he etched his name into Lightning folklore. Roy may have been born in New York, but he was raised in Saint-Jerome and played in the prestigious Québec Pee-Wee Hockey Tournament. While controversy and Roy were never far apart, he was still able to play nearly a decade in the NHL and, of course, just earned himself the Gold medal in the Enforcer Olympics. 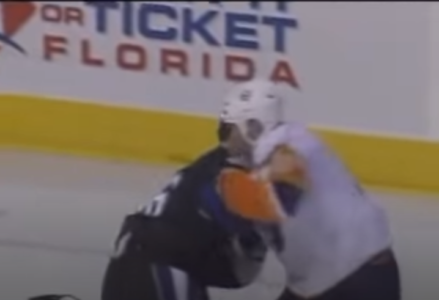 There’s a reason the heavyweight division is the most popular weight class: people love seeing two monsters throw down, especially on a Saturday night. The fans would have loved if the Bolts would have walked away with a win, but a good consolation prize was watching Chris Simon batting our Gold medal winner. The two locked up after a brief chat at the faceoff and immediately started trading left hooks. The bout started strong for Roy but at about the 20-second mark Chris Simon landed two massive left hooks and looked as if he was going to take control of the fight. But Gold medalists NEVER quit. Roy was able to compose himself with some grappling and landed two huge overhand rights and spun Simon to the ice. As the two skated to the box, the video picked up Chris Simon looking at Roy mouthing “good job.” Love to see it.

They say you have to be willing to make sacrifices to become an Olympian, I think fighting the monster they called ‘The Basher’ qualifies as a fitting sacrifice for a Gold medal. The two dropped-the-gloves after Brashear took exception to Roy’s late hit. Bolts fans loved how Roy didn’t hesitate for a second to throw down with the big man. The two traded a series of jabs, but this was more of a grappling match than a scrap. While this bout didn’t result in a bunch of landed blows, Roy showed that – even though he was on his come-back-tour in Tampa – this was still his city. The pride generated in Tampa by Roy allowed the likes of Vincent Lecavalier and Martin St. Louis to play without fear and this scrap was a large reason those two superstars rattled off five points between them that Wednesday night in Florida.

This concludes the first edition of the Enforcer Olympics. Stay tuned for next week’s medalists from the Dallas Stars. Well, there might be a couple of Minnesota North Stars on there, you’ll have to wait and see…