Hockey Fights is an entertainment site with no direct affiliation to the National Hockey League, its teams, or NHLPA
Home > Originals > The Enforcer Olympics – Dallas (North) Stars

Despite boycott calls and COVID outbreaks, China seems adamant that the 2022 Winter Olympics will be a go. However, the uncertainty has made us here at Hockey Fights consider an alternative – The Enforcer Olympics. While many of our Enforcer medalists never had the opportunity of being awarded Olympic hardware, they ensured the safety and protection of those that were so fortunate. Well, it’s their time now! That’s why every week we will award a Bronze, Silver, and Gold medal to each team’s all-time enforcers. This week’s edition gives us the Stanley Cup runner-up, the Dallas (Minnesota) Stars.

Big Bad Derian Hatcher was by far one of the most intimidating players to ever toss on a Stars jersey. While it didn’t hurt that he stood 6”5 and weighed 225 pounds, Hatcher was never one to shy away from contact. This translated into him being an absolute menace to play against, while simultaneously becoming an instant fan-favourite. The former 8th overall pick still stands as the longest-serving Captain for the Minnesota/Dallas Stars, and while he may not be your typical enforcer, there is no denying his willingness to defend his teammates by any means necessary. These leadership qualities have translated into him being the co-owner and head coach of the Sarnia Sting of the OHL. Proving there’s just that certain je ne sais quoi about guys willing to drop-the-gloves at a moment’s notice. 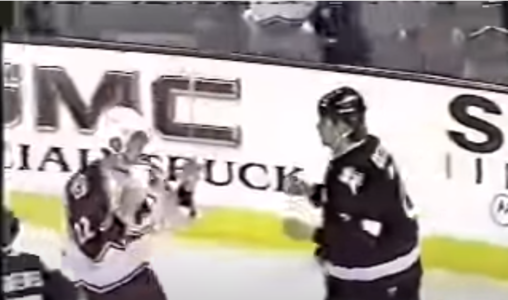 Ah, who doesn’t love to see Claude Lemieux get fed a couple of punches? Those that remember the 90s will recall the Avalanche, Stars, and Red Wings dominating the Western Conference. That’s why every scrap between these rivals was just that much better. In this bout, the two legends dropped the gloves after Lemieux gave Hatcher a little “let’s get after it jab” during a scrum in the corner. Hatcher accepted Lemieux’s advances and gave fans at McNichols Sports Arena a reason to get out of their seats. Unfortunately, the fight was over as soon as Hatcher knocked off Lemieux’s helmet and fed the scrappy winger a flurry of right-hands. Lemieux tried to respond with a few jabs of his own, but Hatcher was just too much to handle. The Quebec native deserves all the credit in the world because there are not many of us that would be jumping in the queue to fight Hatcher, but that’s what the gladiators of the 90s did – fight now, think later.

This bout can be summed up by be careful what you wish for because, with the Stars up by four goals, Hatcher didn’t need to take this bout but Laperriere’s insistence made it inevitable.  Laperriere clearly told the Stars captain that he wanted to dance and the two squared off in front of the Kings’ bench. While this bout won’t make it in either warrior’s highlight reel, it was still an exciting affair. The former North Bay Centennial quickly grabbed a hold of Lappy’s jersey and fed a series of hammer punches to the back of the Kings’ forward’s head. Laperriere was never able to muster any sort of offense and quickly turtled when the big man started firing off right hands. The best part of this bout was when Hatcher delivered one of the most intense stare-downs to his turtled opponent while the Stone Cold Steve Austin theme song blared in the background. Clearly, the confidence of Hatcher and the Stars was sky-high that Tuesday night. The team cruised to an easy 7-4 win, giving fans at American Airlines Center a scrap and a win. Who could ask for more than that?

Our silver medalist is Mr. Shane Churla. The British Columbia native played over a decade in the NHL and was part of the crew that made the move from Minnesota to Dallas. Alongside Basil McRae, Churla fought the likes of Bob Probert, Tie Domi, and Stu Grimson during what was arguably one of the toughest eras in hockey history. While all these enforcers deserve the gold, not everyone can be the bride, so let’s celebrate another one of the toughest guys to ever drop-the-gloves. 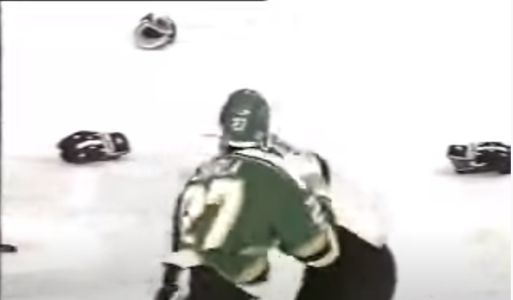 In the words of the legendary Foghorn Leghorn, “Don’t call me no Chychrun now son!” Okay, that’s a bad dad joke, but seriously, that Tuesday night in Philadelphia, Jeff Chychrun must have instantly regretted engaging our silver medalist. The Flyers big man desperately tried to get his hands free during the start of this tilt, but Churla’s defense was just too powerful. This ensured this battle was more tactical than the typical stand-and-trade bouts of the 80s. While both warriors grappled for position to start this battle, the second Churla was able to get his right-hand loose it was over. The scrap ended with two massive right-hands that dropped the Flyer’s defenseman to the displeasure of a rowdy Philly crowd. The Flyers may have had the last laugh with their 6-3 win, but this marked the last time Chychrun made the mistake of dropping-the-gloves against the Stars enforcer.

There’s nothing better than seeing a linesman desperately try to prevent a scrap from occurring, especially when they get shaken off with the slightest of ease. In this tilt, Churla wanted Primeau, and he was hellbent on making it happen. After shaking off the linesman, Churla gave Primeau a slick head-fake that clearly caught the Wings’ forward off-guard and gave our silver medalist the upper-hand. While Primeau did his best to stand tall, Churla’s flurry of right hands was just too much to handle. Combine that with Primeau getting jerseyed, Minnesota fans were all but guaranteed to see their hometown enforcer skate away with the win. The linesmen were able to regain a little dignity by jumping in to end the scrap early, but not before Churla reminded Primeau who the real tough guy was.

Man, you can just tell when someone knows how to fight, and our gold medalist Basil McRae exudes exactly that. McRae never fought with brute strength. He was always strategic, tactical and approached fighting differently than his predecessors. But I guess that’s why they say the apple doesn’t fall from the tree. McRae’s cousin was Walter Henry, the former Commonwealth Games flyweight boxing champion and his boxing acumen was on display every time he dropped-the-mitts. The Ontario native played for 7 teams in his NHL career, but none were more memorable than his time in Minnesota with the North Stars. Minnesota went on a Cinderella Cup run in 91’ but fell short after running into Lemieux and the Pittsburgh Penguins. McCrae was loved during his 5 years in Minnesota and fans at the Met Center always knew when Basil McRae was on the ice… the opposition quickly learned the same. 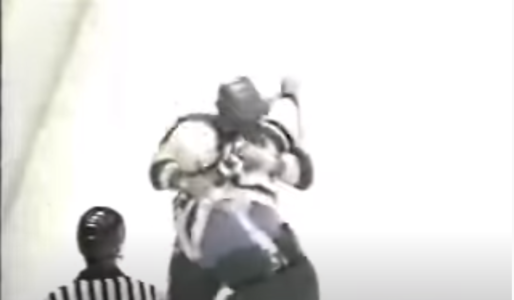 McRae made it abundantly clear that if you wanted to scrap with him in the 80s, you better be damn sure you had good cardio. Our gold medalist always had a little ‘extra something’ in the tank, and this tilt with Ken Daneyko was no different.  While the former London Knight started this bout pinned against the boards, he quickly made space with a flurry of left-hands. Although Devils fans nearly saw McRae get dropped, this tough guy’s boxing pedigree served him well when he avoided Daneyko’s huge uppercut. The linesmen let the two warriors trade a few more blows before jumping in to end the party. It was clear that McRae could have kept the dance going and flashed a coy smile at the end to make sure Daneyko knew it too. This bout kicked off an eventful night that included 6 unsportsmanlike conduct penalties and a thrilling 8-6 win for the Devils. McRae got the decision, but the Devils got the win.

Is a red right hand…

While this song was made famous by the Peaky Blinders and likely weren’t referring to Basil McRae, it’s certainly applicable to this scrap.  In in his inaugural season in Minnesota, McRae quickly introduced himself to fans when – in literally a matter of seconds – he buckled Scott Mellanby with his red right hand. Thankfully, the linesmen quickly intervened, because – continuing to prove his gold-medal-worth – McRae showed no intention of stopping the hay-makers. All the credit in the world to Mellanby for even taking this bout, but he learned his lesson quickly and never dropped-the-gloves against the Stars enforcer again. And after the beating he took in Minny, who could blame him?

This concludes the Dallas/Minnesota Enforcer Olympics. While there are only three spots on the podium, honourable mentions have to be given to Jamie Oleksiak, Antoine Roussel and Jamie Benn. Be sure to tune in next week to see the medal ceremony for the Vegas Golden Knights.