Hockey Fights is an entertainment site with no direct affiliation to the National Hockey League, its teams, or NHLPA
Home > Originals > The Enforcer Olympics – Colorado Avalanche/Québec Nordiques

For our 5th installment of the Enforcer Olympics we head to the land of mountains, hot springs and the Colorado Avalanche. Following their relocation from Québec City, the Avs made their Denver debut during the 1995-96 season and didn’t waste any time endearing themselves to their new fanbase. After finishing 2nd overall behind their Detroit rival, the Avs were unstoppable in the playoffs. They rolled through Vancouver, Chicago, Detroit and got the brooms out for Florida as they lifted the Stanely Cup in their inaugural season. In regards to our Enforcer Olympics, the Avs have a storied enforcer past from beautiful Québec City, and these Olympics will rightfully recognize both clubs. So, without further ado, the Avalanche/Nordiques medal winners are…

Our bronze medalist is Manitoba native Cody Mcleod. The former Portland Winterhawk played a decade in the Colorado capital and registered over 100 fights, amassed 1359 penalty minutes, and tallied 100 penalty minutes in every season except one. While Mcleod was never one to light-the-lamp, he always made his impact felt with big hits and his willingness to go-to-bat for his teammates whenever he was called upon. Following his tenure in Colorado, the undrafted enforcer spent time with the Predators, Rangers and is currently applying his trade for the Iowa Wild in the AHL. McLeod immediately endeared himself to Avs fans with his grit and toughness and is a well-deserving medalist on our Enforcer Olympics 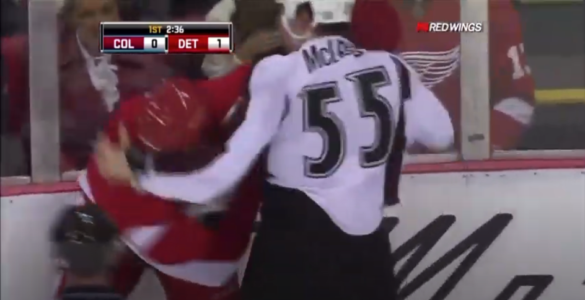 While Mcleod only tallied 7 goals during the 2009-10 campaign, he was able to secure a scrap, the Avs’ opening goal and the equalizer on that Saturday night in Detroit. When May jerseyed the Avs’ big man and started tossing bombs it initially looked like Mcleod was dead in the water. But Mcleod never looked shaken and was able to withstand May’s flurry and land a massive right hook to May’s chin. The Avs winger ended the scrap with a series of rabbit punches before both gladiators acknowledged the bout was over. At first glance, you’d think May won this fight, but Mcleod’s ability to withstand the initial onslaught and end the scrap strong showcased his unwillingness to quit. Late in the 3rd, Mcleod tied the game up and, after a shootout win, the Avs left Detroit with the extra point. Not too shabby of a night for our Bronze medalist.

On the same day that the beautiful Zsa Zsa Gabor passed away, these two warriors squared off for the 7th time in their NHL careers. In hopes of jumpstarting their respective squads, the familiar dance partners tangoed near the end boards at the start of the 1st period. While simultaneously dodging Thorburn’s left hooks, Mcleod landed two big right jabs and started the fight off strong. The two exchanged some small jabs as they jostled and wrestled for position, but neither gladiator was able to land many big blows. Luckily for the fans at the MTS Centre, the linesmen let these rivals trade over a dozen punches before intervening. Both fighters were clearly exhausted at the end of the scrap, but you could tell neither wanted the dance to end. While the judges would give the W to Mcleod, Thorburn and the Jets got the last laugh with a dominant 4-1 win.

Our silver medalist is none other than The Sheriff, Scott Parker. The former Kelowna Rocket had two stints with the Avs where he tallied 538 penalty minutes in 237 games played for Denver. Standing 6’5”, 240 pounds and sporting a mean goatee, Parker was one of the most intimidating enforcers to ever lace ‘em up. The California native fought the likes of Stu Grimson, George Parros and – like many enforcers – has the unfortunate distinction of getting TKO-ed by Bob Probert. Parker retired in 2009 after refusing to go down to play for Colorado’s AHL affiliate and started a barbershop with his wife in Colorado. The former Avs enforcer was one of the most feared fighters to ever play in the Centennial State and was part of the 2000-01 Stanley Cup-winning squad. 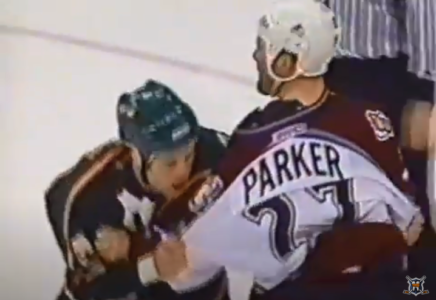 George Parros credits Scott Parker for teaching him to use body shots because his ribs hurt for a week after fighting our Silver medalist. In this battle, Parker utilized his patented strategy and punished Brown with a series of huge body shots that clearly winded the Wild’s defensemen. Parker was an absolute force in this scrap. He bobbed-and-weaved like a boxer, delivering some huge right hooks that complemented his vicious body shots. Brown spent the majority of this fight just trying to tie down Parker’s arms, but the Avs enforcer was too powerful. Credit to Brown for surviving as long as he did and finishing the fight with a flurry of right hands. Nothing better than two giants throwing hands and then giving each other the tap on-the-helmet in acknowledgment of a spirited bout. Parker won the scrap and the Avs were able to hold on for a 3-2 win at the Pepsi Center.

This game had a little bit of everything: big hits, fights, and 13 goals between the two squads. Not a bad way to spend a Friday night in December. In this bout, Quintal took exception to Parker’s hit and wasted no time throwing down with the California native. Parker was able to use his reach advantage to keep Quintal at bay and land some of his signature body shots. As they jostled for positioning, both warriors exchanged some rabbit punches and jabs but neither fighter was able to inflict much damage. The linesmen intervened after both warriors were clearly gassed, but not before they got the fans at the Pepsi Center out of their seats. Avs fans were able to keep the cheering going when they watched Radim Vrbata pop in the OT winner to give Colorado a thrilling 7-6 win. Parker’s intimidating presence always allowed the likes of Joe Sakic and Peter Forsberg to play without fear and gave Avs fans peace of mind knowing their stars would always be protected.

Our Gold medalist is La Petite Peste or, in English, The Nuisance. Dale Hunter. The Ontario native started his career in beautiful Québec City after being drafted 41st overall in the 1979 NHL Entry Draft. During his 7-year tenure in the French province, Hunter tallied 500 points and amassed 1864 penalty minutes in 590 games played. Always a fan favorite, The Nuisance’s trade to Washington was credited as the start of the Nordiques’ eventual downfall. Hunter couldn’t stay away from hockey after his retirement, coaching the London Knights for 11 straight seasons and Washington Capitals for a single season. The Capitals lost in the second round and Hunter resumed his role with the London Knights. In 2000, the former enforcer teamed up with his brother, Mark and fellow Gold medalist, Basil McRae to purchase the London Knights from the Tarry family. Involved in some of the most epic bench-clearing brawls ever, placing Hunter atop this podium was a no-brainer. 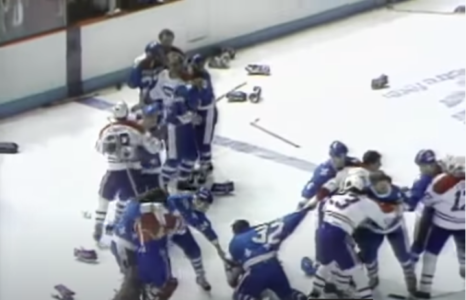 Game 6 of the 1984 Stanley Cup finals will forever be known as the Good Friday Massacre. This edition of the Battle of Québec ended with 252 penalty minutes, 11 ejections, and a good ol’ fight between two brothers. The two-round melee was a result of the Canadiens wanting to exact revenge on Louis Seligher for his sucker-punch that knocked Jean Hamel unconscious. The two Hunter’s started to scrap it out at about the 11-minute mark of the video when Mark Hunter dove on our Gold medalist. While it’s tough to see if any big punches were tossed, the madness was classic old-time hockey and fans at the Montreal Forum loved every minute of it. They also loved watching their team rattle off five 3rd period goals as they serenaded them with the classic Na Na Na Na Hey Hey-ey Goodbye and sent the Canadiens packing. The bad blood between these two teams was no secret. Only in the battle of Québec would two brothers throw hands during a playoff game.

Our Gold medalist certainly earned his Nuisance nickname that Thursday night in the Garden. Hunter wanted a piece of Ken Linseman, and Ray Bourque did his darndest to keep him from getting to him…but nobody could stop Hunter when he saw red. That’s why it should come as no surprise that all hell broke loose when Hunter got a hold of Linseman and rained down punches on the turtling forward. At this moment, the benches cleared and every player looked for their own dance partner. Considering this game boasted the likes of Jay Miller, Basil McRae, Dale Hunter, Mike Milbury, and Gord Donnelly, this melee could have turned out a lot crazier than it did. Fortunately for Boston fans, they got to enjoy a classic bench-clearing brawl and watch their Bruins cruise to a dominant 6-2 win. Although Hunter was always a menace on-the-ice, by all accounts was one the most humble and selfless teammate to ever wear the red, white and blue.

This concludes the 5th installment of the Enforcer Olympics. Honorable mentions to Jeff Odgers, Adam Deadmarsh, and Gord Donnelly. All of these warriors deserve our praise and respect, so even though they didn’t make the podium, it doesn’t take away from the sacrifices they made for their teammates. With only 3 spots to be filled, difficult decisions must be made. Next week we award our medals to one of the Original 6 teams: the Boston Bruins. They’ve had some pretty tough dudes rock the black and gold so tune in next week to see who gets to step up on the podium.