Hockey Fights is an entertainment site with no direct affiliation to the National Hockey League, its teams, or NHLPA
Home > Originals > Thank you Alberta

So, earlier this week I penned (with internet ink) a piece about how the Battle of Alberta is pushing to be the best rivalry in the NHL currently. I don’t think I could have even imagined a more exciting fourth installment than what we had last night.

Is the Battle of Alberta the best rivalry going?

The @Edmonton Oilers headed into @Calgary Flames country with visions of a @Dave Rittich “bat flip” at the end of Wednesday night’s game dancing in their heads:

The game started with two goals for the Oilers in the first three minutes. You had the sense of the old Battle of Alberta being back. The physical intensity was missing though. That didn’t last long as towards the end of the first period @Jujhar Khaira and @Buddy Robinson (both players who were brought in for Wednesday’s BoA) had a spirited tilt: 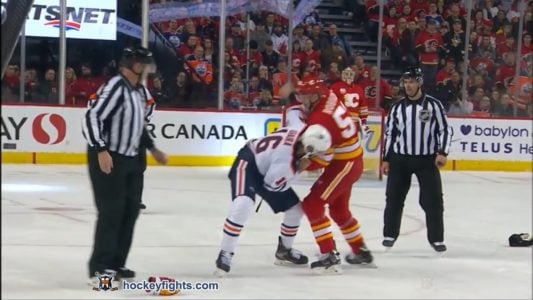 And then things just began to build from there. The goals they started flying, and once the game hit 6-3 Oilers, the powder keg was primed for explosion.

@Sam Gagner (in his 53rd game against the Calgary Flames) dove after a seemingly loose puck on then goalie, @Cam Talbot and all hell broke loose. First we had @Ethan Bear and @Matthew Tkachuk (who after fighting Zack Kassian on Wednesday night has doubled his fight total for the year):

and then mid sequence there, the heavens opened up and for the first time in the Battle of Alberta, GOALIE FIGHT:

This game seemed to have it all. Tons of goals, big saves, physicality and yes, goalie fights. The only true shame is that we have to wait until April 4th for the next Battle of Alberta.

But I think we can all agree, the best thing for the NHL this year might just be a first round matchup between these two teams.