Hockey Fights is an entertainment site with no direct affiliation to the National Hockey League, its teams, or NHLPA
Home > Originals > Is the Battle of Alberta the best rivalry going?

Is the Battle of Alberta the best rivalry going?

At the start of this season, you may remember I came to you on these very hallowed pages and called the San Jose Sharks and Vegas Golden Knights rivalry the best one going right now. Well, two scrappy teams from Alberta have given me some pause for thought.

The best rivalry in the NHL right now?

Don’t get me wrong, the @San Jose Sharks and @Vegas Golden Knights is still a fun series to watch and I believe that they are still at the top but the @Calgary Flames and @Edmonton Oilers have entered the arena of relevancy once again with a couple of spirited affairs that date back to the last game of the 2019 regular season.

For those of you who weren’t aware:

Initial X-ray results look good for Connor McDavid, will have MRI on Sunday

The Oilers won the game, but their captain (and for their former GM Peter Chiarelli’s efforts, their whole team) went down with a pretty significant knee injury. That knee injury that was just revealed as possibly far worse than originally thought, this week in a documentary that has aired in Canada and will make it’s way to the US on NBC February 18th:

Thrilled to announce the "Connor McDavid: Whatever It Takes" will have it's US Premiere on @NBCSN on February 18th. pic.twitter.com/Xn17qttmlR

The fires have been building since then and when the schedule came out, it turned out the first Battle of Alberta wouldn’t happen until the end of December. That actually wasn’t the worst thing for the rivalry as since that December 27th game (in which the Flames decimated the Oilers) the two teams have played each other two more times (Jan 11th – 3-2 CGY win and Jan 29th – 4-3 CGY SO win) and a fourth match-up is not too far away with the two playing in Calgary this Saturday night.

To find the start of the Tkachuk/Kassian was some bad blood born in a game back on November 17th, 2018 when @Zack Kassian and @Matthew Tkachuk got into it and Tkachuk was first accused of “Turtling” by the Oilers fan base:

As I mentioned before, the Giordano/McDavid incident kept things going into the offseason and then on January 11th, Matthew Tkachuk again drew the ire of Kassian and co. with a couple of hits that the hockey community deemed within the rules, but dangerous nonetheless:

And then media, players and everyone in between spent two weeks, and change talking about a whole litany of issues and topics:

Tkachuk on Kassian: ‘If he doesn’t want to get hit, then stay off the tracks.’

And as to that last point, we got our answer in the form of two fights last night.

I don’t know if I can remember a game in the last few years at least where you were expecting so much from a physicality side of hockey. Basically a nightmare for Bettman.

I’d love to find someone with a tweet/text or something that predicted it was going to be @Sean Monahan and @Ryan Nugent-Hopkins to be the first fight of the night.

Sean Monahan vs Ryan Nugent-Hopkins — 16:11 of the 1st period 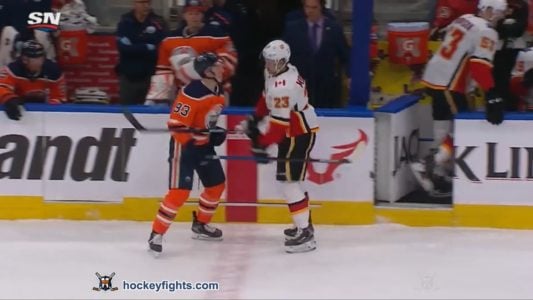 In what would turn out to be the “better” (as rated by the fans) fight of the night, Monahan (1 fight) and Nugent-Hopkins (3 fights) would turn in a spirited bout.

Then, less than 30 seconds later, Tkachuk and Kassian lined up at the faceoff dot for the second time that night (The first time looks like Tkachuk wanted to go and Kassian turned him down):

Matthew Tkachuk vs Zack Kassian — 16:36 of the 1st period 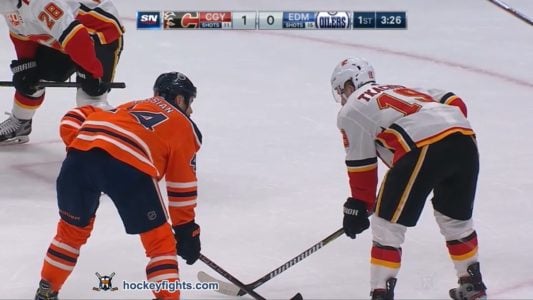 This fight was just a good thing to see from Tkachuk, who to his credit, took a fight against a guy in Kassian who is the far superior pugilist of the two. He answered the bell for his hits previously and all should be good on that end…

Except, as Kassian was leaving the ice cameras caught @Zac Rinaldo (career fights for Rinaldo) from the Flames bench with a couple of words for the man:

Zac Rinaldo has a message for Zack Kassian.

I don’t know if this is indeed the best rivalry in hockey overall right now, but I can tell you for certain I know I’ll be tuned in to Saturday’s rematch of these two teams and for a possible Zac on Zack attack of sorts.