Hockey Fights is an entertainment site with no direct affiliation to the National Hockey League, its teams, or NHLPA
Home > Originals > Gladiator Profile – Tony Twist

Let’s do the twist

Let’s do the twist”

Let’s be real, two people with great names  – Chubby Checker and Tony Twist. And to be fair, this is coming from someone who was literally asked at work once, “Is your name an alias? Craig Jones can’t be your real name.” I think subconsciously that’s why I’m drawn to people with awesome names, but it sure didn’t hurt that I was lucky enough to watch Tony Twist when I was in my prime TV watching years (6-to-12). Ya, ya, ya, I know whether it’s music, sports, politics, or fashion, the good ol’ days will always be looked at from a different lens as we get older. But I am truly thankful that I got to sit on legs-crossed on a carpet and watch Tony Twist rock the red igloo and blue note. ‘Twister’ stood 6’’1” and 245 lbs, and his unique style and frame allowed him to easily grab the right shoulder pad of his opponent, immobilize his opponent and let bangers fly. I know the comparison may not be made often, but just like Ali, Tyson, Silva, and GSP, anyone who got to watch him live knows he was just… different. Guess we can just call that the Gladiator effect. 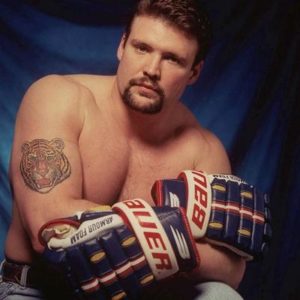 Twist was drafted by St.Louis, had a cup of coffee, took his talents north to Québec, smashed some faces, and then came back to finish his career with the team that selected him in the 9th round. A fitting career arc for a man that was able to rack up over 1000 penalty minutes and 100 fights in less than 500 games played.  Former teammate Owen Nolan is quoted as saying, “He throws hammers, he throws to kill. I’ve seen him crack a helmet with a punch. If I hadn’t seen it, I wouldn’t have believed it.” Sheeeeeesh. I love that quote because people may tend to exaggerate, but that’s a story that I do not doubt in the slightest.

It only took Rob Ray 5 years to get his revenge on Tony Twist, but not in the way most would expect. The infamous ‘Rob Ray’ Rule, or Rule 46.13, underlined that you would be ejected from the game if your jersey wasn’t tied down and came off during the fight. Well, in the Predators inaugural 1998-99 season in Music City U.S.A, Patrick Cote lost the fight but got to watch Twist skate off with an ejection. The two tangled up early in the 2nd period, initiating their 3rd dance of the year. Standing at 6’3”, Cote had the clear reach advantage but was never able to capitalize. The two traded some big punches, with the majority of Cote’s missing while Twist’s landed on his taller opponent’s helmet. Both fighters were clearly gassed by the end, which certainly benefited Cote because Twist had his jersey and pads off and was ready to throw some unrestricted bombs. Despite his pleas that his jersey was tied down, the linesmen jumped in and escorted an enraged Twist to the dressing room. The former Saskatoon Blade had to watch from the sidelines as his Blues pounded the Predators 5-1 that Tuesday night in March. 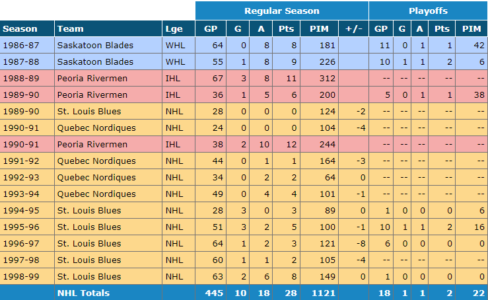 Twist’s career ended abruptly after a motorcycle accident in 1999 that forced the St. Louis enforcer into retirement with a broken pelvis. The first few years after the accident were difficult for Twist and his loved ones and, in a blunt interview, Twist offered a great analogy for his role as an enforcer – “Imagine going to high school every day, you’re trying to get As and Bs because you want to make the honour roll and make your parents happy. But at the end of every day, you’re going to have to fight the biggest kid at your school or the biggest kid at another school, that’s got to be on your mind the whole time, the same thing goes for an enforcer.” This analogy offered fans a small window of insight into the excitement, fear, and stress that accompanied the burden of carrying the title of enforcer. This is exactly why we need to celebrate those that do the jobs that most of us couldn’t…

Comic fans may also remember the mobster Antonio “Tony Twist” Twistelli from the popular Spawn comic book series. One problem? Tony Twist never approved and didn’t even know about his depiction in the popular series until a group of kids went to Twist’s mother’s house in British Columbia and asked if they could get their merchandise autographed. Twist displayed class night-in and night-out in his role as enforcer and channeled that same integrity when he filed an anonymous John Doe lawsuit against the makers of the Spawn series. Twist applied anonymously in hopes of keeping publicity to a minimum and resolving the situation the same way he did on the ice: battling it out with no hard feelings. Unfortunately, producer Todd McFarlane dragged the proceedings out into the public-eye, forcing countless appeals until the ‘Twister’ was finally awarded a $5 million settlement. It must be noted that Twist didn’t proceed with this lawsuit for fiscal gain; he did it because of his values. He famously clarified that in the cartoon he was depicted as being “in pink thong underwear, smoking a cigar, ordering the kidnapping of a child while two women are naked on the couch making love to each other. I obviously didn’t want any part of that. It’s nothing I want to be affiliated with.” Whether it was visiting Mike Peluso in the hospital the night after their bout or ensuring the younger generation didn’t associate him with a mobster, Twist was always a class-act. Twist was able to retain the respect of his peers and, most remarkably, all his teeth.