Hockey Fights is an entertainment site with no direct affiliation to the National Hockey League, its teams, or NHLPA
Home > Originals > Gladiator Profile: Tie Domi

Well, I have to say I wasn’t surprised that the fans chose to learn a little more about Tie ‘The Bald Beauty’ Domi. Whether you’re a fan or not, Domi embodied what it meant to be an enforcer. By standing at only 5’10” it meant he didn’t have the luxury of just being an intimidating force, he had to prove it night-in and night-out and never shy away from an opportunity. Maybe it was wrestling incepting his psyche, but it wasn’t an accident that his bouts with Probert were front-and-center on Sport shows. Domi loved giving the fans a show and knew that maybe they came for the game, but the fight was what got them out of their seats. Honestly, part of me thinks Vince Mcmahon and even Eric Bischoff missed out on the opportunity to excite wrestling fans with Tie Domi’s charisma. Hell, even Gary Bettman messed up by not pushing it for a free boost in hockey popularity. I will even admit that as a Western Canadian kid I detested everything coming out of Toronto, but whether it was on a Don Cherry Rock ‘em Sock ‘em VHS tape, or Hockey Night in Canada game, I was always pumped to watch Domi. He was always entertaining, honorable, and was tough as nails. That’s why I’m very proud to be able to shed a little more light on the man from Windsor. 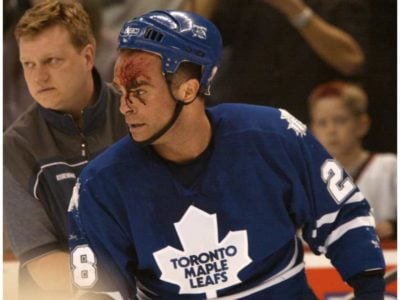 It’s safe to say that Tie Domi wasn’t a shy guy. The former Peterborough Pete never cowered when the spotlight was shone upon him, and that’s why every fanbase that got to see #28 in action loved when he was on-the-ice. Whether it was in Winnipeg, where the fans religiously chanted ‘Dommmmmmmmmmiiiiiii’ even after Teemu Selänne set the rookie scoring record, or as a Leaf when Domi gave it to a fan who had the cajones to jump in the box with him in Philly (sorry, not sorry Chris Falcone, you got what you deserved). Through it all, Domi was always a man of the people, which is why fight fans shouldn’t be surprised that he even made an appearance with the late Alex Trebek on a real Canadiana episode of Jeopardy.

As the battles with Rob Ray are legendary, they solidified themselves in fighting-folklore with their ‘Deca Dance club’ routines. While Ray usually had the upper hand on Domi and – to the disapproval of Rick Jeanneret – Domi gave it to Ray that night in Marine Midland Arena. Don’t get me wrong, I’m a huge Rob Ray fan. But there’s a part of me that felt Karma reared her ugly head by punishing Ray for his historic advantage of dominating opponents by getting shirtless faster than Matthew McConaughey at a friend’s BBQ. Well, on that Wednesday night, Karma finally said, “Sorry Ray, but this time your jersey is going to leave you blind to Domi’s fists.” Props to Ray for fighting blind for the majority of the fight and staying on his feet. But at the same time, after their previous bouts where Ray’s stripping skills were advantageous, props to Domi for being able to enjoy every minute of this scrap. 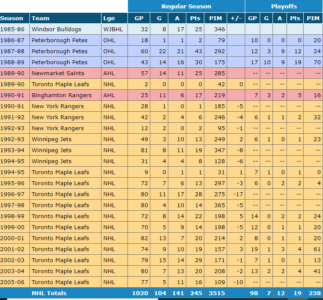 Domi was an absolute legend on and off-the-ice. Whether it was him getting Mario Lemieux into the legendary China Club and not only arm-wrestling Ken Daneyko, but having a head-butt challenge as well. Or when he perhaps unknowingly inspired Seth MacFarlane by fighting a grown man in a chicken suit for taunting his Junior B teammates. Oh, I should also mention that he was only 14 at the time, and by all accounts, smashed the chicken man like it was nothing. Domi fought during arguably one of the toughest eras of hockey and fought the likes of Probert, Berube, Odjick, and loads more. Even after his retirement, Domi’s popularity continues to rise. Whether it’s dabbling in soccer, being the placekicker in the CFL, or stealing a camera during his son’s U-18 tournament (don’t worry he gave the camera back…without its battery), Domi will forever be etched in Canadian and fighting folklore. Will Max be able to fill his pops’ scrapping shoes? Not from a lack of trying, but with the NHL trending the way it is I wouldn’t bet on it. But luckily he inherited those legendary eyebrows, and those beauts will always bring fight fans back to a better time. Faleminderit Zotëri Domi! (Albanian for Thank you, Mr. Domi)