Hockey Fights is an entertainment site with no direct affiliation to the National Hockey League, its teams, or NHLPA
Home > Originals > Gladiator Profile – Stu Grimson

I have to start this one by saying something I know we’re all thinking…great nicknames are an absolute dime a dozen nowadays! Back in the day we had the likes of ‘The Hammer’, ‘Knuckles’, ‘The Boogeyman’, ‘The Bruise Brothers‘, ‘Bulldog’, ‘Rambo’, ‘Cementhead’, and I could go on for days. But one of my personal favorites has to be – Stu ‘The Grim Reaper’ Grimson. Shoutout to Hockeyfights user Eric Brooks for suggesting the 6”5’ monster and giving us a trip down the nickname-memory-lane. Now let’s learn a little more about the man that wielded a stick instead of a scythe. 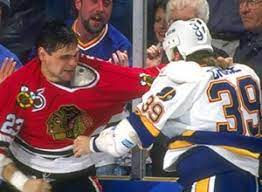 It’s fair to say that Stu Grimson is cut from a different cloth. I’m not saying he’s an anomaly, but I’m saying that enforcer-turned-lawyer isn’t your average career-switch. The “Grim-Reaper” battled the likes of Probert, Laraque and Domi, but nothing’s tougher than battling ‘The Man.’ To go from being recruited outside a movie-theater for beating up some ‘Rig Pigs’ (true story) to an insurance lawyer, may not be the normal stepping-stone. But Grimson was never one to fit the mold. Rather than turning pro, the former Regina Pat opted to go to the University of Manitoba because he valued the opportunity to play hockey without having to fight and got an education in the process. Grimson parlayed that education into a successful career after he hung up the skates and continues to play an integral part in both the NHL and the minor leagues. Also, I may not know the man personally, but I’m pretty sure he has a damn good sense of humor… Grimson famously poked fun at his NHL statline as he chalked up a dreadful 39 points in 729 games played. When asked how he feels about his goalie Arturs Irbe having a better Points per game average than him, he simply responded “Yeah, but he gets more ice time.” Grimson knew his role and he performed it admirably, night after night, and clearly with a smile.

This is one of my favorite Grimson fights because it truly fills my heart with love. Two gladiators just tossing absolute bombs with total disregard for their well-being, embodying the classic mano-a-mano saying to the fullest. Hence why I don’t think it’s a coincidence that Whitney Houston’s I will always love you was the number one track in the country… Alright enough pop references, let’s get to the scrap. Marty ‘The Mullet’ McSorley may not be his official nickname, but the mullet was on full display that Saturday night in the Great Western Forum. These two heavyweights didn’t waste any time dropping the gloves and got after it at the start of the 1st period. At the faceoff dot, the two just stood and traded huge right hands – neither intending to back down. Mcsorley yanked on Grimson’s jersey as much as he could to try and keep the Hawks’ enforcer at bay, but at about the 17-second mark both enforcers decided to give up any form of tactical fighting and just started letting off absolute haymakers. Neither flinched. McSorley looked to get the upper hand when he was able to slip out of his jersey, but Grimson handled the change-of-outfit well and used his reach advantage to keep the jersey-less McSorley at a distance. The two enforcers set the tone for an eventful evening with nearly 10 penalties being issued in the 1st period. While the game ended in a 2-2 draw, it was McSorley who left the arena with an entertaining scrap, and a short-handed goal. Safe to say that mullet was partying in the City of Angels that night, I know I would have been! 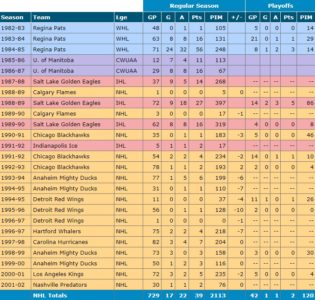 A little over a decade ago, Grimson, as well as other fighters including Chris Nilan and Jim Thomson were targeted by Don Cherry as “pukes” for speaking out on the dangers of fighting. If you get a chance, please listen to an interview on CBC where Grimson addresses this debate in an honest and eloquent way. The debate over this issue has raged on for years, and will continue to do so, but as Grimson says, there are valid points on each side, in which I totally agree. I just think it’s important to listen to a man that played and fought during arguably the toughest NHL era. There is something to be said about being an enforcer, but also doing it amongst the elites. Grimson’s road to the NHL was different than most and, while he was drafted by the Red Wings, they never offered him a contract. There is a weird rule in the NHL where retaining a player’s rights doesn’t require you sign them – you only need to offer them a contract. Detroit clearly didn’t like what they saw with Grimson and he was sent back into the draft where his rights were picked up by Calgary. The Flames invested in Grimson and even sent him to a skating camp in hopes of improving the big man’s skills. It must have worked, because Grimson not only stayed on his feet fighting Dave Brown in the Battle of Alberta but was able to skate on the biggest stage for over a decade. Grimson has settled into his role as lawyer in Nashville and detailed his journey in the well-written, “The Life and Career of a Reluctant Warrior.” The fact that Dave Brown shattered Grimson’s orbital bone, which he took as a sign that he could make it as an NHL enforcer, showed that ‘The Grim Reaper’s name wasn’t bestowed upon him, it was earned. Whether you support fighting or not, you have to respect the ones that did it, do it, and will do it in the future. Thanks for reading, and please hit us up with some more Gladiators you’d like to see featured. Happy holidays everyone!!