Hockey Fights is an entertainment site with no direct affiliation to the National Hockey League, its teams, or NHLPA
Home > Originals > Gladiator Profile: Stan Jonathan

Whether it’s your neighbor, friend, classmate, or total stranger, they all have a unique story that deserves to be told. And being that Hockeyfights is a site dedicated to the warriors that have dropped the gloves for our entertainment, I think it’s only fair to share their unique stories with the world. This week we do a deep-dive into a man that is widely believed to be one of the pound-for-pound toughest players to ever lace ‘em up. Hope you enjoy learning about the life of a Bruins legend, Mr. Stan Jonathan. 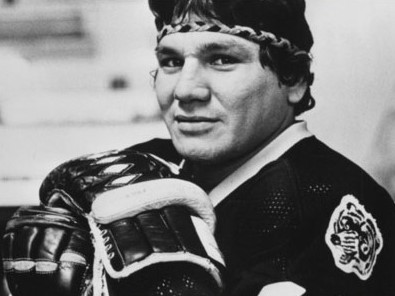 The former member of the ‘Big Bad Bruins’ didn’t have any height or weight restrictions when it came to choosing his challengers on the ice: whoever wanted to dance, got to have Jonathan as a partner. The product of the Six Nations Reserve was fearless from a young age. This was largely instilled in him by his father during their summers working together as ‘high steel’ laborers who built apartment and office towers. When asked if he was scared working at those heights, Jonathan simply replied, “I was scared the first couple of times I went up. But soon I learned it wasn’t all that dangerous if you followed safety precautions. But it’s just like hockey: get careless and you can get hurt.”

As the son of a lifelong Bruins fan, I have heard the tales of Stan Jonathan for decades. There’s a common phrase amongst the ol’ timey Bruins fans, “they just don’t make ‘em like Stan Jonathan anymore.” And to be honest, they’re right. Stan Jonathan was like Roberto Duran on skates (minus the “No Más”), taking two punches to land one, but knowing his one would be so devastating that it would be worth it. Well, tell me after watching our gladiator fight the giant Pierre Bouchard that his style wasn’t special. This is my favorite fight for several reasons – the David vs Goliath battle is always eye-catching, but it was the fact that this scrap wasn’t some regular-season tilt, it was Game 4 of the ‘77-’78 Stanley Cup Finals! Certainly a far cry from the modern-day playoffs where you’re lucky to see a scrap even in a blowout game. The cherry on top for me is that it was against their bitter rival – Les Habitants. True hockey fans know how deep the rivalry runs between the Bs and the Habs, but a quick story from Andrew Ference’s wife summed it up perfectly. She said she truly understood how much these fans detested each other when she saw a Bruins fan piss on the heads of a couple of Canadiens fans below him. Obviously, I don’t condone these actions, because I would definitely snap if someone did that to me. But a part of me secretly loves the passion (minus the piss.) Maybe opting for some chirps or chants in the future would be better for everybody. But I digress. In this battle ’78, the Habs got the last laugh over the ‘Lunch paul Gang’ of Terry O’Reilly, John Wensink, and our gladiator of the day Stan Jonathan, as they went to secure their third straight Stanley Cup. 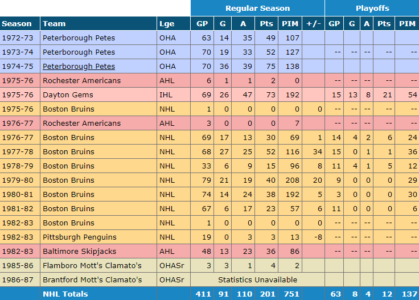 The Don Cherry led Bruins prided themselves on finishing every hit, capitalizing on turnovers, and not relying on a ‘top-line.’ Instead, they depended on contributions from every line on every shift. This translated into an NHL record that will likely never be replicated – 11 players with over 20 goals, including Jonathan who finished with 27 during the 1977-78 season. I’m jealous of the fans that got to go to the Garden and watch these lay massive hits, smash faces and light the lamp at the same damn time. However, we are here to hear share Jonathan’s story and I would be doing a disservice to everyone by not mentioning the following –

For over 25 years, Jonathan was able to live out his retirement at home until disaster struck on Remembrance Day, 2012. The hunting enthusiast went out deer hunting early that November morning, and by all accounts practiced what he preached when it came to gun and hunting safety. However, an unfortunate series of events forced the paths of Jonathan and Peter Kosid to cross that fateful day. Kosid was an avid bow-hunter who had driven to the reserve to hunt with a friend, but his friend had left to take his son to a hockey tournament, leaving Kosid hunting alone. In hopes of bagging his first-ever deer, the 28-year old novice hunter and Hamilton resident was wearing all camouflage fatigue. At this time, Jonathan – who had hunted in that area for years – spotted a buck in the middle of Frank Mountour’s field down the Third line. He pulled his truck to a rusty metal gate where hunters parked their vehicles, loaded his gun and fired at a buck that was approximately 200 meters away. To avoid it running too far, hunting protocol suggests waiting for an hour-or-so before approaching your target. It is reported that the former Bruin then went to pick up his ATV and texted his brother for help picking up the deer. That’s when they saw Peter Kosid’s lifeless body in the field. They immediately called the police. Jonathan was taken into custody for questioning and remains adamant that the bullet must have gone through the deer before striking Peter. DNA results of the case were unable to find any residue of a deer on the bullet that killed Peter Kosid. Stan Jonathan was initially charged with criminal negligence but the charges were later dropped. An awful mistake and a horrible accident, the tragic events of that Remembrance Day shouldn’t define Jonathan. He was a legendary teammate and I bet he’d be the first to tell you that he’d give it all up to bring Peter Kosid back to his family.

“Thinking is difficult, that’s why most people judge.” – Carl Jung

Please consider that when sharing your feedback, we love to hear it. because that’s the only way to truly grow. And be sure to vote on the next gladiator you’d like to hear about. Cheers!