Hockey Fights is an entertainment site with no direct affiliation to the National Hockey League, its teams, or NHLPA
Home > Originals > Gladiator Profile – Link Gaetz

My eyes lit up when IG user @winstonbucey suggested Link Gaetz to be the next Gladiator Profile. I still have a theory that Link Gaetz had incepted Shigeru Miyamoto and Takashi Tezuka of Nintendo after seeing him smash faces in the BCJHL and thus named their Zelda hero after him. Link was born in 1968, and Zelda was released in 1986…both have beautiful blonde flowing locks and are fierce warriors….Okay, Okay, Okay, it may seem a little far-fetched, and I have a sneaking-suspicion that the British Columbia Hockey League wasn’t getting Japanese T.V. rights in the 80s. Regardless, both Links are absolute legends! That’s why I am looking forward to taking a deep-dive into a man that played for over 20 teams, countless fights, both on and off the ice, and threw down with the likes of Joey Kocur, Tony Twist, Bob Probert, and anyone who was dumb enough to chirp him at a bar. “The Missing” Link Gaetz may have been built for scrapping, and there was no doubt he was damn good at it. But according to his former San Jose teammate Doug Wilson, “Link was big and strong and he could really move. He probably had the hardest shot in the league. Comparing him to Derian Hatcher is quite fair.” Regardless of what could have been, we aren’t here to deal with hypotheticals. We are here to honour and celebrate the Gladiators that have given us so much excitement, joy, and that special adrenaline rush you only get when you watch a hockey fight. Ladies and gentlemen, Mr. Link Gaetz. 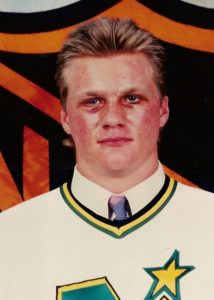 I don’t know about you, but I’m getting a little bored with all the lame-ass documentaries coming out. So, while I may not be a filmmaker, I’m pretty damn tempted to write, record, and release a documentary about our Gladiator today, because god damn his story is super interesting. I know there was one in the works, but I can’t seem to find it anywhere. So if any fight fans know of it, by all means, please let me know! Okay, there are many memorable draft stories in sports, including in 1995 when the Ottawa Rough Riders drafted a player that had passed away the year before, or in 1974 when the Buffalo Sabres opted to draft Taro Tsujimoto from the Tokyo Katanas of the Japanese Ice Hockey League. Only problem? Tsujimoto wasn’t a real player, I guess Japanese scouting wasn’t exactly top-notch in the 70s, and as I mentioned they weren’t watching the BCJHL either.  But die-hard Minnesota North Stars fans will never forget the 1988 NHL Entry Draft when Lou Nanne selected ‘The Missing Link’ in the second round, and the Gladiator showed up with 2 black eyes. Mind you those shiners weren’t from a brawl on the ice, they appeared after a couple of brewskies, three or four shooters, some chirps, and a good ol’ bar scrap the night before. Nanne famously said, “I drafted Mike Modano in the first round to protect our franchise. I drafted Link Gaetz in the second round to protect Mike Modano. I should have drafted a lawyer in the third round to protect Link Gaetz.” Clearly, Gaetz was no stranger to trouble, both on and off the ice. But for now, let’s go back into the ocarina of time and enjoy a solid tilt between two heavyweights.

While I never had the opportunity to experience it myself, I’ve heard many stories of the ol’ Cow Palace in California, and they are all awesome! Back then, the Sharks as a whole may not have given the fans a lot of reasons to get out of their seats, but Link always knew how to get them riled up…beat the hell out of ANYONE who wanted to throw down. Well, on that Thursday night the opponent was kind of an ummmm legend… and Link could care less. The two monsters traded absolute bombs in this one. No defense, all offense, and that folks is my kind of fight. If I had to judge this fight, it would be damn close, but I would have to give the edge to the Vancouver native. Gaetz, similar to Probert, always had this uncanny ability to never look shook. Never worried. Just total composure while a man attempts to take his head off. I get nervous when I hear a noise in the middle of the night, let alone staying cool while fighting the G.O.A.T. on skates. In the end, the fight ended the same as the game, a tie. 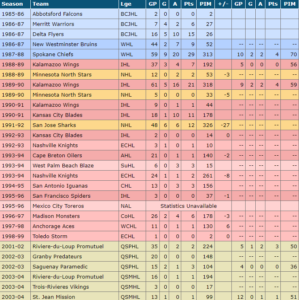 Link Gaetz NEEDS A MOVIE. Whether it was when he was tossing TVs out the window because “it wouldn’t open”, fighting teammates in practice, shooting out a church’s stained glass windows (actually), dropping a deuce on an old roommate’s pillow because of unpaid debt, or taking his equipment off midgame because he was hungry and needed to head to the concession stand to grab a burger. Link was an absolute beauty! But as you know, I like to joke around in these articles. However, for a moment we need to be serious. Alcoholism is a disease that more than 6% of Americans struggle with every single day. Our Gladiator did the toughest job in sports for nearly two decades while battling this disease. Yet through it all, a journalist in Miramichi remembers that Gaetz was an impossible interview, but a kid seeking an autograph could have all the time in the world.

In 1992, Gaetz suffered a brain stem injury that initially left him paralyzed when his friend got in an accident, and he was thrown from the vehicle. He attempted to make a comeback with the Sharks, but he just couldn’t do it. Gaetz competed in the infamous Battle of the Hockey Enforcers, but after getting knocked down twice in the opening round and suffering from concussions-like symptoms, he was forced to walk away. The Missing Link hasn’t touched a stick since 2007. And after yet another stint in jail, Link stayed true to form and said  “Jail was the best thing that ever happened to me, it taught me that I never want to go to jail again.” By all accounts, he is now sober, married, and a proud dad to a young boy. We often take for granted the sacrifices these Gladiators make for their team, their family, and truthfully, for all of us. I hope you enjoyed getting to know more about Link Gaetz, and I still think Nintendo owes him some damn royalties. In the end, all these Gladiators deserve their shine, so please let us know who you think should be the next Gladiator Profile.