Hockey Fights is an entertainment site with no direct affiliation to the National Hockey League, its teams, or NHLPA
Home > Originals > Gladiator Profile – Dave Semenko

If I had to place a wager, I would bet those that voted for Dave Semenko were a little more north than south in Alberta. In hindsight, I should have asked the fans if they wanted to learn about Tim Hunter or Dave Semenko, but maybe as an Edmonton kid, my biases took over. Don’t get me wrong, I love Tim Hunter and I’ve written about him before, and look forward to writing about him again because he seems like a genuine and awesome dude. But today we take a deep-dive into ol’ ‘Cementhead.’ For those that are too young to have watched Semenko live (myself included, I was just lucky enough to have grown up with die-hard Oilers fans), the Gladiator from Winnipeg will forever remain an Oilers legend. In fact, I’ve said to my friends numerous times, whether it was in front of Northlands, Skyreach, Rexall, or Rogers, the fact that the Wayne Gretzky statue doesn’t have Dave Semenko right beside him seems blasphemous. Let’s be honest, the second Semenko arrived from the Minnesota North Stars, the two were inseparable (much to the fear of the opposition), so why separate them now? Hell, Gretzky appreciated the protection so much he gave Semenko the car he won for being MVP in the 1983 All-Star game. Good trivia question, what car was it?? None other than the beautiful 1983 Pontiac Transam baby. Sometimes I think I was born in the wrong generation because that car was a beauty. But I digress. By all accounts, Semenko was a presence that lit up the room both on and off-the-ice. This is why as a proud Edmontonian, I am pumped to write a profile on one of the best Gladiators to ever lace ‘em up. 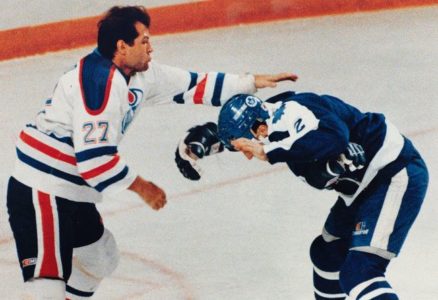 How about we start with another trivia question –  Who was the last player to ever score in the WHA before the merger? Wayne Gretzky? Bobby Hull? Nope! Dave ‘Cementhead’ Semenko. Feel free to use that bit of trivia to get a free drink from your friends one day because it’s unlikely they will pick the bodyguard over the star. Granted, if you were just a casual observer and saw that Dave Semenko only had 60 fights you’d think, ah, okay he was a part-time enforcer. When in reality, there’s a reason he only had 60 fights. He smashed dudes’ faces! 6”3, 215 lbs, and for god’s sake, his nickname was Cementhead. To be fair, Semenko did have a tendency not to wait for the stereotypical square up and fired a few punches when his opponent wasn’t expecting it. But what do you expect from a Gladiator? I don’t recall Maximus waiting for the Emperor to give him the go-ahead before spearing a lion. They are in the trenches, and I firmly believe that unless you’ve been in them, keep your judgment to yourself (aka – me).

Semenko may not have been the boogeyman, but when you slashed ‘The Great One’ he always magically appeared. Unfortunately for Gary Howatt, he didn’t even slash Gretzky and still had to deal with Semenko. During Game 2 of their quarter-finals playoff series, Wayne Merrick was the one who actually slashed Gretzky as he cut past the blue line. But Semenko didn’t care who it was, someone had to get punched for the slash and he didn’t waste any time exacting his revenge. I wish I would have been alive to witness not only the Oilers dynasty but that of the Islanders as well. When I watch all the old clips, I can’t help but think, damn, hockey was just different back then. No disrespect to the game today, but there’s that certain je ne sais quoi when watching a game from the 80s. Imagine as a neutral hockey fan getting to watch the Islanders bang-out 19 consecutive playoff series wins, and the follow-up act was watching Gretzky and Messier lead the Oilers to their dynasty. Oh, and you got to listen to Queen, AC/DC, and Kiss in their prime. Shit, I think my parents were right, the 80s were just something I’ll never understand.

On June 29th, 2017 at the age of 59 after losing his battle to lung and pancreatic cancer the hockey world lost a legend. The memorial was held at Rogers Place because of the number of friends and fans that wanted to pay their respects to the fallen enforcer. Glen Sather, Paul Coffey, and Wayne Gretzky had nothing but glowing words to say about their former teammate, but the outpourings in the guest book was what made the celebration of his life truly beautiful. Edmontonians sharing stories of meeting Semenko in a local pizza shop and of how he would randomly pop into rinks around town showed that his impact on the city of Edmonton was unparalleled. Any Oilers fan has likely seen it, but those that haven’t, I suggest you check out the sparring match between two legends- Dave Semenko and Muhammad Ali. Semenko joked that Ali was nervous to get in the ring with him… Ali proceeded to have a nap in the Oilers’ dressing room, so I’m guessing he wasn’t that nervous. Ol’ Cementhead once said that while his two Stanley Cup rings were special, the moment he got to step in the ring with the man that floated like a butterfly and stung like a bee was one of his most cherished memories. While the world took a Gladiator from us far too soon, there’s no doubt his legacy will live on for eternity, and if someone could please let Daryl Katz know that it’s about damn time another statue got built.