Hockey Fights is an entertainment site with no direct affiliation to the National Hockey League, its teams, or NHLPA
Home > Originals > Gladiator Profile – Darren Langdon

Waddaya at Fight Fans? Me? I am doing pretty damn good because I get the opportunity to not only write about one of the 28 Newfoundlanders to ever play in the NHL, but also give a deep dive into a fighter I watched in my prime hockey watching years (8-14). As I’ve mentioned before, when you don’t have to worry about a job, bills, impressing the opposite sex or driving, what else is there to do than play and watch sports! Ahhhh, simpler times. Quick shoutout to Hockeyfights user “Corcy” for suggesting the Deer Lake native. It’s a gift and a curse that there are so many warriors to choose from. Luckily, I don’t plan on going anywhere, so please keep sending in your suggestions, and I will do my best to give our gladiators the praise and respect they deserve. Alright, let’s get after it. 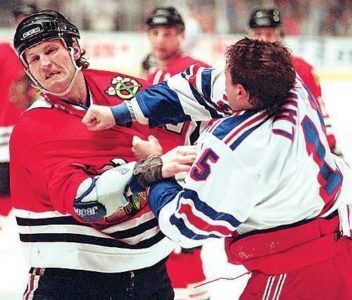 I have a theory that TRUE sports fans all have a bucket list of rivalry games and arenas they want to be able to see in person. The problem with this list is that sometimes these rivalries fizzle out, the arenas get torn down, and the ol’ needing money to pay for tickets, travel and accommodation often throw a wrench into things. I won’t bore you with my bucket list (it’s a damn good one, so if you want it, please reach out to me directly), Yes, of course I would have loved to see a game in the famed Montreal Forum, Boston Garden, Toronto Gardens, Joe Louis Arena and MSG, but being from Edmonton and loving the old barns, I would have loved to see a game in Nassau Coliseum during the 80s and 90s. The rowdy crowd, the seats shaking, and the sheer passion is right up my alley. Bossy and the four cups would have been nice, however, we all know beggars can’t be choosers. So, if I had to settle on seeing the Islanders and Rangers rivalry, you wouldn’t hear any complaints from me if I snagged tickets to this Saturday night showdown. The Isles fans not only got to see their squad smash their hated rival 3-0 that night, they also got to see 43 penalties for 240 penalty minutes, and some tough SOBs throw hands.  These SOBs included – P.J. Stock, Gino Odjick, Rich Pilon, Jeff Beukeboom, Zdeno Chara, Darren Langdon and *drum roll please*…Tommy Salo and  Dan Cloutier.

Every fight fan in the Nassau Coliseum knew what was coming when Joe Sacco lit the lamp to put the Isles up by 3 with eight minutes against the Rangers. John Muckler tapped his big boys on the shoulder, and they knew exactly what to do. Langdon had already fought Odjick at the start of the first, and while you’d think that and the fact that he picked the 6’9”, 250 pound Slovak as his dance partner, he might be at a wee bit of a disadvantage. Wrong! Granted Chara was only a rookie at this point, and Langdon certainly made him look like one. Langdon seemed calm the entire fight, tying up Chara’s arms kept the Isles Captain from utilizing his massive reach advantage. Langdon was able to connect with three left jabs and one big hook while the  future Stanley Cup winner was immobilized. Honestly, Chara got lucky he slipped at the end because the pride of Newfoundland tossed a hell of an uppercut that would have caused some serious damage if it had landed. I hope you watched the whole video because the fun certainly didn’t stop there! PJ Stock (a future Gladiator Profile) wanted to get in on the action, and opted to give Mariusz Czerkawski a nice beat down. So much so, that Tommy Salo felt the need to jump in. Well, we all know that breaks the unwritten rule of letting the two warriors square up, and thus Dan Cloutier was forced to intervene with a flurry of rights while Salo was turtling for protection. Clearly Cloutier was a tad frustrated with the 3 goals he let in, so it should be no surprise that he wanted to scrap with whoever wanted some. In the end, the scoreboard was all Islanders, but the fight card definitely read N Y R. 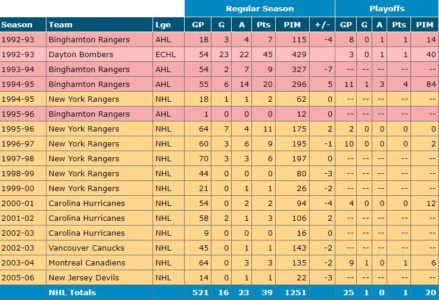 Darren Langdon will be the first to tell you how lucky he was to make it to the show, but the residents of Deer Lake don’t care how he got there, he got there, and they are damn proud of him! Hence why when you cruise into Deer Lake there is a beautiful sign saying “Home of Darren Langdon.”  While Langdon may have gone undrafted, he didn’t let that deter his goal of playing in the NHL. And after some impressive performances in the ECHL (a very physical league), the New York Rangers gave him a chance in 1995. I have never met Langdon, but the fact that his teammates voted him for the Players’ Player Award in 1996 and 1997, it’s safe to say he was loved and respected by his teammates. Hell, I’d even bet the majority of his fighting opponents would consider him a class act. The former Dayton Bomber (fitting team for Langdon to be a part of) squared off with some absolute giants. Oliwa, Grimson, and Domi four times, Craig ‘Chief’ Berube  three times, and most notably, Probert twice.

To say Langdon is a family man is somewhat of an understatement. He not only has four children, three of which are triplets. But his father’s side of the family had 17 kids, while his mother’s side had 13….my god they don’t mess around in Newfoundland! In the end, the former Ranger, Hurricane, Canuck, Canadien and Devil may be remembered for dropping the gloves, but I’m pretty sure his favorite his hockey memory would be when he netted his first NHL goal against the future hall of famer Patrick Roy, and was subsequently gifted a suit by Mark Messier after the game to welcome him to the league. Legendary story for a legend in our hearts. Pretty damn fitting.

Please hit us up with any other Gladiator recommendations. I love getting to write about these studs, so the more the merrier…and I sincerely mean it when I say – Long may your big jib draw!