Hockey Fights is an entertainment site with no direct affiliation to the National Hockey League, its teams, or NHLPA
Home > Originals > Enforcer Olympics – Vancouver Canucks

It should come as no surprise that the “Hollywood of the North” has had some real-life action heroes don their legendary jerseys, including – of course – the Flying V. Since their 1970 debut, the ‘Nucks have made three Stanley Cup Finals and, like many clubs, have been unable to raise hockey’s prestigious trophy. Having said that, let’s stay positive.

Any Canadian that has traveled abroad and told someone they’re from Canada, ALWAYS got a first response like, “Oh, you’re from Toronto?.” And when you respond nope, the follow-up question is, ” Oh you’re from Vancouver?” As someone from the Prairies, it always rattles me, but I get it.  Why? Because Vancouver is beautiful, one-of-a-kind and, although they’ve never raised the Cup, they have housing prices and a hockey history like no other. This includes having some of the most legit gladiators to ever lace ‘em up in Canada’s most beautiful city. So, as Bruce Buffer says….”IT’S TIME”…for our Vancouver Canucks medalists.

I feel the need to make this abundantly clear. Regardless of your profession, race, gender, life circumstances, or choices, NOBODY should die alone. Some writers and hockey professionals may choose to ignore this fact. While the goal is to entertain fans, I have to acknowledge that a warrior died far too young so that we can honor our heroes after their passing. Hours after Rypien’s devastating suicide was announced, Canucks fans gathered outside Rogers Place to pay their respect to a gladiator they’ll never forget. Thankfully, it’s 2021 and those battling depression have more resources than they did a decade ago when Rypien died at only 27 years old. It’s heartbreaking and fitting to honor one of the toughest F*ckers of all-time.

These two monsters scrapped it out three times in 2009 and David beat Goliath every single time. Rypien was truly something else. Standing 5’11” and 194 lbs, he absolutely dominated the 6’4,” 230 lbs Oilers defenseman. But what else would you expect from a Bronze medalist in the Enforcer Olympics? In this bout, Rypien immediately rocked Stortini with a massive left-hand that nearly dropped the Oilers big man. Credit to Stortini for staying on his feet, because I know damn well I wouldn’t have. Stortini was able to cover-up and withstand a flurry of added left-hands, but Rypien was just too much. The fact that the ‘Nucks enforcer had missed 70 games that season and was still able to deliver that kind of beat down proves why he’s standing on the podium. In the end, both enforcers skated to the dressing room – Rypien sporting a smile; Stortini looking for an ice-bag.

It’s amazing that a saying from 260 BC in Aesop’s Fables is still prevalent today – “Be careful what you wish for.” Clearly, Richard Clune hadn’t considered this ol’ tale, because the Kings forward received an absolute beat-down after challenging Rypien during Game 5 of the Western Conference Quarter-Finals. Rypien could have skated away, but instead he gave Clune a beat down – and, to add insult to injury – while his team was up by five. After a couple of slashes, Rypien decided to engage, and immediately dragged the instigator to-the-ice. Clune was somehow able to get back to his feet, but Rypien made sure he didn’t stay there for long. While grappling and in-tight, our Bronze medalist landed two huge left-jabs that sent Clune back-to-the ice. Clearly injured, the disgruntled Kings forward immediately skated to the dressing room while Rypien strutted off to the applause of the fans at General Motors Place. Rypien hammered Clune in this scrap and the Canucks sent the Kings to the golf course two days later. That folks, is what we call a win-win.

Chris Rock may have been talking about Tiger Woods when he said “Tiger, Tiger, Tiger Woods Y’all” but, between you and I, the real Tiger will always be David “Tiger” Williams. The Saskatchewan native was one of the toughest dudes and, as mentioned in his appearance in the Enforcer Advent Calendar, holds the NHL record for penalty minutes with 3,971. Frankly, that feat is comparable to Teemu Selänne’s rookie scoring record and Gretzky’s single-season scoring record, because NONE of them will be broken…ever. Hence why hockey fans will always remember the original Tiger as a fighter that could be inducted as a Leaf or a ‘Nuck. On top of proving his merit as the Silver medalist for the ‘Nucks, this truly makes him worthy of being carved onto the Mount Rushmore of enforcers.

As an Enforcer Olympics Silver medalist, there’s no better way to start a night than netting the game’s opening goal and following it up with two huge scraps. Well, that’s exactly what the original Tiger did that Saturday night in Hollywood. His first victim was the Kings’ 6’2” winger Steve Jensen who he dropped-the-gloves with near the Kings’ blue line. Lucky for fight fans, both gladiators started the bout by trading absolute bombs. I’ve got to say, calls like, “Jensen throwing bombs and Williams returning none of them” blatantly show it’s a homer announcer. This simply wasn’t accurate. Both monsters traded some big blows throughout this scrap, which included Williams landing three massive uppercuts. The judges would likely call this a draw because both left leaking but there was one glaring difference: Jensen left bleeding from his face, while Williams only needed to wrap a towel around his hand. Of course, that doesn’t indicate the winner of a battle, but we all know a towel around the hand is better than one around the dome.

Let’s be honest, who wouldn’t love the opportunity to throw-down in the legendary Madison Square Garden? Maybeeeeeeee not Steve Richmond, because no matter how hard he tried, he couldn’t channel his inner Mills Brothers and Hold That Tiger in the Garden. Our Silver medalist always had an uncanny ability to inflict damage in close quarters, and this scrap was no different. The two locked up after Richmond took exception to Williams delivering one of his many massive hits deep in the Canucks’ zone. Williams fed Richmond a series of rabbit punches and, once he ripped his helmet off, it was over. Three big uppercuts followed up by a big left jab sent the Rangers defenseman sprawling to the ice. The announcers’ summed this scrap up perfectly by saying, “Tiger’s one of the mean men in hockey. I mean genuinely mean, he’s a dangerous man…Steve had no business starting this one.” Life lesson: if you aren’t standing on a podium, don’t scrap with someone who is.

While there are many enforcers worthy of standing atop the Canucks Enforcer Olympics podium, it only felt fitting to put a Gold medal around the neck of the man with the most fights and penalty minutes in Canucks’ history. The product of the Algonquin Native Reserve located just outside Maniwaki, Quebec, Odjick threw down with heavyweights like Dave Brown, Tie Domi, Tony Twist, Marty McSorley, and somehow held his own every single time. The ‘Nucks tough-guy played nearly a decade in Canada’s most beautiful city and anyone lucky enough to hear the “GIIIINOOOOOO, GIIINOOOO” chants know this selection is a no-brainer. 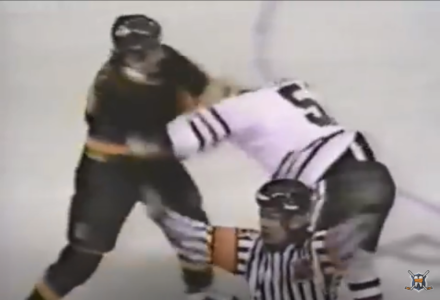 After defeating Sonny Liston, Muhammad Ali infamously said, “I’m the greatest thing that ever lived. I don’t have a mark on my face…” Gino Odjick may have never repeated this amazing quote, but after the beating he gave Cam Russell in the Pacific Coliseum, nobody would have bat-an-eye if he did. Why? Because there aren’t many one-sided hockey fights and this one certainly was. Honestly, it’s almost a little painful to watch because the second Gino grabbed a hold of the ‘Hawks defenseman he just started feeding him right hands. Thankfully, Russell was able to limit the damage and delay the inevitable rain of right hands by spinning our Gold medalist for a few seconds. However, once the dance ended, the linesmen had no option but to intervene. In the end, it was awesome to see Canada’s most beautiful city absolutely buzzing because they got to end 1992 with a wild scrap, two goals from Petr Nedved, and a dominant 4-1 victory.

To be a true Gold medalist, you always have to exude class. In hockey, there’s nothing classier than holding back when you realize your opponent is just out of your league. While I love Thomas Steen as a player, he should have known better – when it came to fighting, he couldn’t even hold Odjick’s jockstrap. Hence why at the 33-second mark, you can see Steen literally grabbing at Odjick’s ankle to just hold on. Even with Mike Eagles doing everything he could to get after him, Gino kept his cool and let Steen off-the-hook. Hell, he didn’t even flinch when Jets’ Coach John Paddock tossed a water bottle at him mid-fight. During this melee, several big fights broke out but, unfortunately, it ended in an act of cowardice. Odjick was skating victoriously back to his bench when Mark Osborne jabbed him in the face with a stick. Fortunately, The Algonquin Enforcer kept his cool, mashed some faces, and the boys got the 3-1 win at home. Proving class > cowardice, all-day.

This concludes the Vancouver Enforcer Olympics. Obviously, leaving Donald “The Basher” Brashear off the list will raise a few eyebrows. But spoiler alert! He might be making an appearance at a later date. Honorable mentions have to be given to Garth Butcher, Stan Smyl, Harold Snepts, Darcy Hordichuk, and Curt Fraser. Also, a special shout out to Kevin Bieksa for his sacrifices on-the-ice, as well as the love and compassion he showed our Bronze medalist Rick Rypien prior to his death. Bieksa opened his home to Rypien, an altruistic act that, heartbreakingly, wasn’t enough to help him overcome his crippling depression. In addition to celebrating his legacy, I hope this article speaks to the value of reaching out to loved ones. You never know how much something as simple as a text could mean to someone else or how reinvigorating it can be for ourselves. Tune in next week as we travel to the City of Brotherly Love where some top heavyweights will be vying for a place on top of the Enforcer Olympics podium.