Hockey Fights is an entertainment site with no direct affiliation to the National Hockey League, its teams, or NHLPA
Home > Originals > Enforcer Olympics – Pittsburgh Penguins

Black and yellow, black and yellow, black and yellow! Wiz Khalifa may have been talking more about the Steelers, but the Penguins represent the black and yellow just as much in Pittsburgh. The Pens have a history like no other. They have had two of the greatest players to ever lace ‘em up. ‘Super Mario’ and ‘Sid The Kid’ will always dominate the headlines, yet without their enforcers, they would have faced more adversity than they already did. We can joke all day about how the NHL made damn sure the Penguins were taken care of and considering the circumstances surrounding the drafts, who’s going to argue against it? Thankfully, they managed to avoid bankruptcy, and are sixth for most Stanley Cups in NHL history. The beauty about watching the Pens was whether it was Lemieux, Crosby, Malkin, or the beautiful mullet of Jagr skating down the ice, you knew they were going to be protected. And rightfully so. Some people may not like the idea of a tough guy being needed to protect the stars, but to those folks, I say, human nature will never change. To stop the studs, you have to take liberties. Well, these fellas made sure those liberties were limited and if the opposition dared to do it, these medalists made sure they’d have to answer the bell. Legends don’t become legends by themselves, and that’s why it’s time to celebrate the dudes that made sure their rise was unimpeded.

Do you know who loves Arron Asham? Pens fans… and Paul Martin. I am making light of the cross-check he delivered to Brayden Schenn during the 2012 playoffs, but let’s be honest, Asham was the guy you hated when he wasn’t in your colors, but loved when he was. And guess what? That’s okay to say. Asham is going to live on in internet folklore with his retaliation to Schenn’s hit on Martin. But it’s his infamous celly after dropping Jay Beagle that makes fight fans go wild. For me, I loved it all. Hence why he’s a no-brainer for the Enforcer Olympics podium. The former Red Deer Rebel played for over a decade in the NHL with stints in Montreal, New York, New Jersey, Philly, and two years in Pittsburgh. ‘Ash’ was armed with a thunderous right hand and an iron chin, which made him one of the toughest pound-for-pound fighters to wear the penguin on their chest. 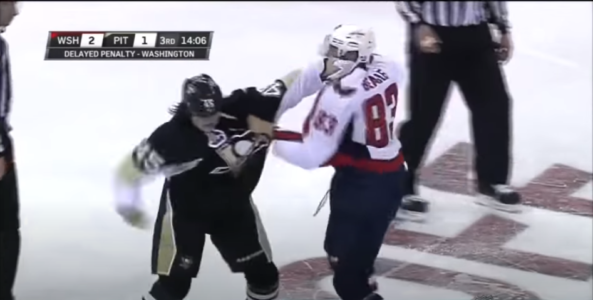 This fight proved that you don’t need to fire off a flurry of punches to drop someone, all it takes is one well-timed banger. Beagle probably thought he was going to dominate this fight because he looked to be in total control with his right hooks. Wrong. On that Thursday night in Pittsburgh, our Bronze medalist was able to pick his spot and made sure the season started with a bang. Some people may take offense to the celly after Beagle got dropped, but I can only imagine how much adrenaline is coursing through a fighter’s veins. So when you knock somebody out in front of 19,000 fans, it’s to be expected that you’ll want to celebrate a little bit after. Thankfully Beagle was okay, and a small consolation prize was the Caps snagged the 3-2 OT win.

Ah, remember when Atlanta had an NHL team. It feels like it’s been forever since I’ve seen those hideous Thrashers jerseys, but it’s only been a decade. Asham never cherry-picked his opponents, whether it was the likes of big Adam McQuaid, Colton Orr, or in this case, the wild man Chris Thorburn. The two chatted it up at the draw, and both players gave the fans a show to start the game. Thorburn started the bout strong with two big right hooks and even threw in a sneaky body check against the boards. Asham was able to answer back with a few rights of his own. The turning point of the fight was when Ash lost his balance and looked to be going down to his knees, but was able to quickly regain his footing and land two massive right bombs Credit to Thorburn for staying on his feet because Asham’s right hand always had some serious power behind it. The former third-rounder snuck in an uppercut and a few more big blows before the linesmen intervened. And thanks to a hat trick from Sidney Crosby, the fans got to enjoy a win and a hell of a fight.

While most people may think of Diego Maradona when they hear ‘The Hand of God,’ for Pens fans, it’s all Eric Godard. The undrafted enforcer racked up over 300 penalty minutes and over forty fights during his three seasons in Pennsylvania. The former Lethbridge Hurricane held his own against the likes of Colton Orr, Donald Brashear, Georges Laraque, and Jody Shelley. Godard knew his role wasn’t to light-the-lamp, it was to protect his teammates at all times. And the man with the Hand of God never disappointed, especially when he came to the defense of his goalie Brent Johnson during the pier-six brawl with the Islanders in 2011. Godard excelled in his enforcer role during the 2008-09 Stanley Cup run, and his presence allowed the dynamic duo of Crosby and Malkin to work their magic. The British Columbia native carved out a decade in the NHL and is more than deserving to be today’s Silver medalist. 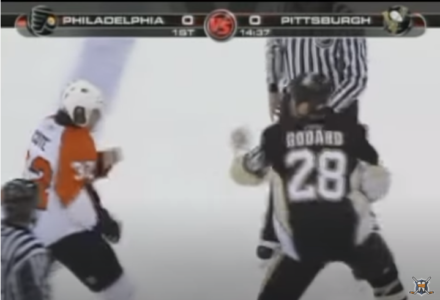 It wasn’t surprising that it only took five minutes for a scrap to break out in the Battle of Pennsylvania. This bout pitted two warriors that both had knockout power. If you glanced at this fight, you’d think Riley Cote was the victor, because my lord, did he ever throw a lot of punches. But Godsy was always calculated with his punches and made every single one count in this scrap. Cote started the bout strong with a flurry of hooks, but at the 20-second mark, Godard got his speed bag on. Five quick jabs and two massive jabs landed clean on Cote’s chin. The two heavyweights kept trading blows until the linesmen ended the fun. Thanks to an OT goal from Pascal Dupuis, the Pens gave the fans at Mellon Arena all the excitement they could handle on that Tuesday night in the ‘Burg.

You knew things were bound to get a little chippy in a 4-0 blowout, but unfortunately for Jay Rosehill, our Silver medalist was on the ice when it did. Rosehill’s charge jump-started a party that even had Sidney Crosby getting in on the action. Godard grabbed a hold of Rosehill and unloaded a ton of right hands to the back of his head. Credit to Rosehill for trying to fire a few back, but the former Lethbridge Hurricane was just too powerful. Godsy followed up his initial onslaught with two massive uppercuts that left Rosehill leaking. While it’s never great to see a guy getting fed shots while he’s on the ice, you could tell Godard was rattled and had no intention of letting up. Overall, it was a rough night for Toronto. They left bruised, bloodied, and with a 5-2 loss at the hands of the Penguins.

The man, the myth, the legend, Bob ‘Battleship’ Kelly is today’s Enforcer Olympics Gold medalist. Although he didn’t have many takers during his four seasons in Pittsburgh, this wasn’t for a lack of trying. It was his reputation of beating Dave Schultz in a preseason game that allowed him to intimidate the opposition with just a glance of an eye. The injection of Battleship into the lineup allowed the Pens to challenge the Flyers with not only toughness but skill as well. In fact, Kelly had himself a career year in 1974-75 when he tallied 27 goals, 24 assists, and over 100 penalty minutes. Kelly feared no one and even said that Dave Schultz wasn’t a real heavyweight because “ …I put him on his rear end twice in two fights, it was three punches and two punches. I challenged their whole bench one time in Philadelphia. I wasn’t in a very good mood that night.” Don’t tell me that doesn’t take some serious cajones. The former Leafs draft pick worked his tail off to get to the NHL. After nearly a decade playing in the IHL, AHL, and CHL, Kelly finally made the permanent leap to the NHL. Whether it was his bombing right hand or just his beautiful flow, our Gold medalist always looked good in a scrap.

This fight started because Kelly laid down a massive hit, and Nowak didn’t like it. While it’s weird seeing the Pens in blue uniforms, it’s never weird seeing Kelly lay the smackdown on someone. Kelly got Nowak down and unloaded a flurry of uppercuts to the Bruins fighter. The two got back on their feet, and Kelly kept the onslaught coming with three big right hands. Nowak did his best to fire some shots back but was forced to keep his head down to avoid getting lit up. The scrap was all Kelly, but the fans at the famed Boston Garden got to enjoy a 6-4 win for their home squad.

This battle took place in Game 7 of the Quarter-Finals and it’s not one Pens fans will look fondly at. Pittsburgh had a dominant 3-0 series lead, but the Islanders roared back with four straight wins to steal the series. Kelly’s fighting style was truly something special. He never looked to protect himself, he just targeted and fired. This allowed him to completely dominate fights because there was no stopping the storm once it started. Our Gold medalist was an absolute gem with his long locks, duster ‘stache, and foam neck protector. It was the classic 70s look and he rocked it better than anyone. Dave Lewis was able to land a couple of good shots, but Kelly just kept coming forward with punch after punch after punch. Unfortunately, the linesmen intervened early because if they hadn’t, this could have been a legendary scrap. Regardless, it was a spirited bout in a Game 7 playoff game, and who doesn’t love to see that.

This concludes the Pittsburgh edition of the Enforcer Olympics. As always, this is my list. Yours could be the exact same, or completely different, either way, these enforcers are all deserving of their spot on the podium. Honorable mentions to Gary Roberts, Rick Tocchet, Bob Paradise, Jay Caufield, Troy Loney, Krzysztof Oliwa, and our former medalists Georges Laraque, Marty McSorley, and Deryk Engelland. Next week we’re traveling to one of the best barns in the league, and somewhere that is on my bucket list to watch a game. Beautiful Nashville, Tennesse. They may not have the most storied past, but they don’t call it Smashville for nothing! Tune in next week to find out who’s taking their deserved spot on the Enforcer Olympics podium.