Hockey Fights is an entertainment site with no direct affiliation to the National Hockey League, its teams, or NHLPA
Home > Originals > Enforcer Olympics – Philadelphia Flyers

This Enforcer Olympics is going to be difficult because you know there’s going to be some tough dudes from the city that tossed snowballs at Santa Claus, fired a beer bottle at Ryan Howard, and had the cohones to jump in the penalty box with Tie Domi. Luckily, that’s what the Enforcer Olympics are all about. Philadelphia is one of, if not the toughest cities in the NHL, and although the city’s epidemiology is the Greek meaning of Brotherly Love. These enforcers haven’t shown love to anyone since the Philadelphia Quakers were established in 1930. But fortunately for fight fans, they have an extensive history of enforcers. This list includes a few that scrapped their way to back-to-back titles with the notorious “Broad Street Bullies.” There will obviously be some warriors left off this list, but that doesn’t mean they aren’t deserving medalists, this is my list and we love to hear yours. Well, let’s not waste any time celebrating some of the toughest dudes to ever rock the letter “P” on their chest.

To some, this may be a surprise medalist, but to those that watched ‘The Hound’ throw down, it won’t be. Bob Kelly was an absolute monster on the ‘Broad Street Bullies’ and threw hands like a professional boxer. Playing at 5’10” and 190 lbs, The Hound was an absolute menace on the ice. Whether it was the opposition, referees, fans or teammates, Kelly hit whatever crossed his path. The true testament to Kelly’s toughness was when his fellow enforcer Dave Schultz said “In terms of pure toughness, Kelly was first on the Flyers and I was second, and with all due respect, Kelly became the heavyweight champion of the Flyers.” That nomination and praise is coming from one of the toughest guys to ever drop-the-gloves, and that folks is why Bob Kelly is our Enforcer Olympics Bronze medalist.

I love this fight because both No. 9’s stand side-by-side and watch Schultz and Schoenfeld scrap it out, until they both decide, ‘Screw it, let’s fight too,” Maybe it was seeing their teammates throw down that inspired them, or maybe it was just boredom. Either way it was awesome. Both fighters started the bout with a complete disregard for their well-being by firing off a flurry of right-hands. I’m guessing this is why when Bobby Clarke was asked about Kelly he simply said, “He always gets in three or four punches before the other guy realizes he’s in a fight, he throws punches faster than anyone in the league.” While the judges would likely deem this scrap a draw, the fact that there’s a sign in the crowd saying ‘The Hound chases park cars,” clearly shows there was no love lost between these two teams. It should be noted that this was Game 4 of the Stanley Cup Finals, and although the Sabres would leave victorious on that Thursday night, it was The Hound who would have the last laugh. The Ontario native potted home the game-winner in Game 6 of the series with a sick wrap-around, proving that he could not only beat you with his fists but on the scoreboard too.

I don’t think Philadelphia fans could dream up a better Saturday night than this one in 1974. They not only got to watch The Hound demolish Larry Johnston, but they got to enjoy their Flyers rack up 12 goals in a 12-2 rout of the Detroit Red Wings. After being victim to a massive hit against the end-boards, Larry Johnston wanted to dance, and Bob Kelly wasted no time accepting the invitation. I felt bad for Johnston losing his balance early, but The Hound clearly didn’t, because he fed the Red Wings defenseman about 7 right hands within a blink-of-an-eye. The linesmen jumped in early, and Kelly didn’t like that one bit. He continuously fought with the linesmen to get at Johnston, and although he was unsuccessful, he hit the Wings where it hurt – on the scoreboard. Kelly fired home Philly’s 11th goal and was an assist away from the Gordie Howe hat-trick. The feisty winger clearly swung the momentum with his 1st period scrap, and as he did for a decade, he gave the fans at The Spectrum a reason to get out of their seats.

Baby. I’m wrong, but it’s lonely in the penalty box.

I know I broke the rules, but rules are broken by fools.

While many may not consider Dave “The Hammer” Schultz to be a Renaissance man, the fact that he has two Stanley Cup titles, a double-sided album, co-authored a book, and netted home a series-clinching goal makes it hard to deny him that title. The Saskatchewan native was one of the toughest to ever drop-the-gloves and was a key member of the infamous ‘Broad Street Bullies.’ Schultz not only holds the single-season record for penalty minutes with 472, but after injuring his wrists he began wearing boxing wraps for protection. This caused a trend amongst enforcers to utilize these wraps. The end result was both the WHA and NHL introducing the “Schultz Rule” which banned boxing wraps in games. The cherry on top of Schultz’s resume was when he served as a referee in the WCW Slamboree for a match between The Nasty Boys and Cactus Jack and Kevin Sullivan. There’s literally nothing this guy can do, and that’s why he’s our Silver medalist. 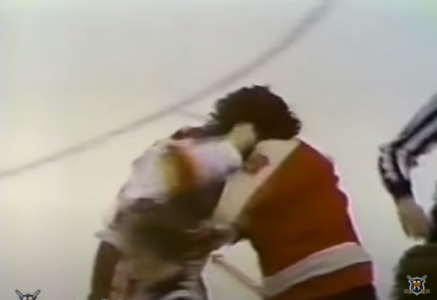 You know you’re dominating a fight when your opponent is pleading with the linesmen to jump-in. Well, that’s exactly what happened on that Sunday night in the Omni Coliseum. Hextall did his best to tie up The Hammer,  but the second Schultz got his hands loose, it was over. Hell, Schultz even grabbed Hextall’s hair in an effort to free himself up, and unfortunately for Hextall, it worked. The Flyers enforcer let off two big left uppercuts, two big jabs and then two more uppercuts until the linesmen saved Hextall from the beating. This was Game 4 of the Stanley Cup Quarter-Finals and Schultz added insult-to-injury by firing home the overtime winner to complete the Flyers sweep. Our Silver medalist was integral in the Flyers Cup run in 1974 and his intimidating presence helped Philadelphia celebrate their first Stanley Cup ever. Not too shabby for a kid from Waldheim, Saskatchewan. Don’t worry if you don’t know where it is, nobody did… until Schultz put them on the map.

The Hammer sent a message to the Islanders on that winter night in Philadelphia –  nobody was safe from his wrath, not even the best players. Credit to Potvin for standing toe-to-toe with Schultz, but let’s be honest, he didn’t stand a chance. In this bout, Schultz connected 5 huge right-hands to the former number 1 pick’s chin. Schultz proved how dominant he was by skating away from this scrap virtually unscathed. Whether this bout was in Potvin’s head when these two squads met in the Stanley Cup semi-finals is debatable. But the Flyers got the last laugh when they came out victorious in an intense seven-game series. While there will never be a team as intimidating as the Broad Street Bullies, their talent is often overshadowed by their physical prowess. You can be tough as nails, but you have to be talented to win back-to-back Stanley Cup titles. Schultz and his crew did exactly that.

“The left-handed are precious; they take places which are inconvenient for the rest.” – Victor Hugo.

The French poet likely wasn’t referring to NHL enforcers, but Dave Brown’s relationship with his fellow combatants epitomized this quote. The Saskatoon native was something special and those that were lucky enough to watch him live will anoint his left-hand as one of the strongest punches they’ve ever seen. That is exactly why he is our Enforcer Olympics Gold medalist. Brown was an absolute monster on-the-ice, and if you did an enforcer poll, I’d bet there’s a lot of fighters would rank Brown at the top. The Flyers selected Brown in the 7th round of the 1982 NHL Entry Draft and he gave the City of Brotherly Love over a decade of blood, sweat, and tears. Okay, maybe not the tears part, because Brown never showed any emotion. He was constantly stoic as he pummelled opponents and although he raised his only Stanley Cup in Edmonton, he remains etched in Flyers folklore. In fact, Brown is currently serving as the head of pro-scouting for the Flyers, proving that Philly will always be in his blood. 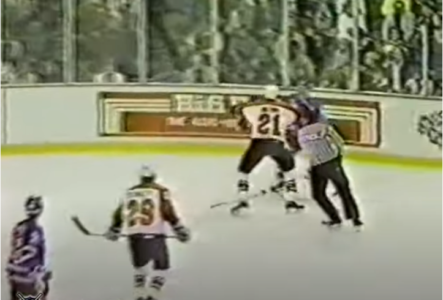 Saturday nights in The Spectrum were just different when Dave Brown was around. Brown handed Terry Carkner a beat-down less than two minutes into the game. So you can imagine how much it would have sucked if you were late to this game. Honestly though, this should come as no surprise. Brown stood 6’5,” 210lbs, and his left-hand was absolutely legendary. Unfortunately, this scrap started after Brown delivered a high-stick to the Rangers defenseman, and Carkner immediately sought out retribution. While I may agree that you can’t let someone get away with that nonsense, dropping-the-gloves with a Gold medalist is never a good idea. Brown started this bout strong with seven unanswered punches and ended it quickly with a massive hook that dropped Carkner to-the-ice. The highlight of this scrap for me was when the camera caught the Rangers D-man rattled he got rocked, while Brown skates to the penalty box completely stoic. That my friends, is the mindset and temperament of an absolute warrior.

Who wants to play cat and mouse? Not Dave Brown. Our Gold medalist never played games, especially with a fellow heavyweight like John Kordic. We discussed John Kordic in the Enforcer Advent Calendar piece, FYI for those that haven’t read it, you should. Kordic was one of the toughest dudes to ever lace em ‘up, which is why Dave Brown’s annihilation of the Nordiques tough-guy is fitting for a breakdown. Brown was never one to dance around and jockey for position, he just grabbed hold and let loose. And our Gold Medalist stayed true to form in this scrap by unloading a flurry of left hands in a matter of seconds. While Kordic was able to answer back with a few hooks of his own, Brown was able to easily keep the Edmonton native at bay. By all enforcers’ accounts, including Stu Grimson who has his cheek and orbital bone broken by Brown. The Saskatchewan native was a baaaaaaaad man. Imagine someone with lunch pail hands, a vicious left hook, and for 10 years, battled some of the  NHL’s toughest dudes. That folks is Dave “Browny” Brown.

This concludes this segment of the Philly Enforcer Olympics. Honorable mentions have to be given to Behn Wilson, Glen Cochrane, Craig Berube (it was tough not to pick a fellow Craig), Todd Fedoruk, Rick Tocchet, Riley Cote, Andre Dupont, Donald Brashear, and John Kordic’s brother Dan. Let’s be honest though, some of the toughest guys in hockey history have rocked the “P” and it’s unfortunate we can only pick three. But in the end, this is my list. Let’s hear yours. Tune in next week to see who earns their spot on the Windy City’s podium.