Hockey Fights is an entertainment site with no direct affiliation to the National Hockey League, its teams, or NHLPA
Home > Originals > Enforcer Olympics – Montreal Canadiens

Le Tricolore, Le Bleu-Blanc-Rouge, Les Canadiens de Montréal, The Habs, we all know that when you have that many nicknames, you have to be one of the best clubs in the game. Growing up a Western Canadian kid,  it pains me to say this, but the Montreal Canadiens are the best to ever do it. They not only have the most Stanley Cups in NHL history, but their 1909 establishments make them the longest-running hockey organization. They also hold the dubious distinction of being the last club to bring the Cup back to Canada. As we saw with the previous ‘Orginal Six’ teams, they have an extensive list of enforcers. But that’s the fun part about the ‘Enforcer Olympics,’ there is no set criteria, it’s all subjective. And while we always have our biases, let’s be honest, whoever you watched as a kid sitting cross-legged in sweatpants will always have a special place in your heart. And guess what? That’s okay. Let’s take this time to celebrate as many gladiators as we can and the more the merrier, so let us know your picks, but for now, here’s our podium.

This may seem a little off-the-board for most casual fans, but for those that watched Odelein, understand why. Cornelius, the Planet of the Apes nickname Matthew Barnaby unceremoniously bestowed upon him, was one of the toughest dudes to ever drop-the-gloves in Montreal. The Saskatchewan native threw down with the likes of Dave Brown, Jody Shelley, Tim Hunter, Bob Probert, Stu Grimson, and was a member of the 1992-93 Stanley Cup Canadiens team. And for those that don’t know, he contributed an uncanny +35 plus/minus, led the team in penalty minutes, while never missing a game. Odelein certainly left his mark on Montreal, and that is exactly why he is being awarded the Enforcer Olympics Bronze medal. 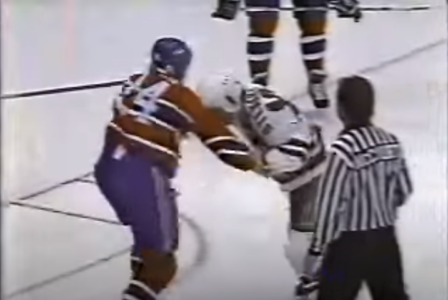 There’s always something dangerous about a man with a vicious left hook. Odelein was that dude. He may not have never had the fear-factor like a Probert, Twist, or Domi, but he always gave the opposition a handful. In this bout, Odelein started the fight by feeding Stewart a flurry of lefts that would have buckled most of us, but the Devils’ mustached-man held on strong. In fact, he held on just long enough for Odelein to fire off one last storm of left-hooks before the linesmen were forced to intervene. The fans at the Brendan Byrne Arena were loving the tilt and they got to enjoy their Devils cruise to a 6-3 win. However, for Odelein, this fight put the league on notice that even though he would go all season without lighting-the-lamp, he had no problem lighting the opposition up with left-hooks.

Whether your friend drags you to a bad party, concert, or restaurant, it sucks because you feel obligated to stay. But getting dragged into a fight is a whole different ball game. On that Saturday night in the famed Montreal Forum, Todd Ewen jumped Rob Ray, and our Bronze medalist had no option but to throw down with Donnelly. Luckily for fight fans, Odelein was never one to run from a dance-invitation. After the linesmen held back Ewen, Donnelly, and Odelein squared-off near the blue-line. The linesmen were too busy dealing with Ewen, so these two heavyweights had plenty of time to get after it. The two started the scrap by trading some huge blows and both fighters showcased their ability to throw with either hand. As they jostled for position, punches rained down in all directions. It’s difficult to pick a clear winner in this scrap, but I would give the nod to Odelein. It’s wild that our Bronze medalist’s hardest battle in life would be inflicted by a cactus. Yup, a cactus! When Odelein was on a golf trip in Arizona he went to snag his ball out of the rough and was pricked by a Jumping Cactus. The former Stanley Cup winner didn’t think anything of it, but after days of feeling sluggish, he went to the emergency room. Odelein was told he had a blood infection that traveled to his heart and his organs began to shut down. After slipping into a coma, a cardiac surgeon made an executive decision to replace his heart valve and it was a success. Odelein may have lost a couple of fights on-the-ice, but thankfully he won the one that mattered most.

There aren’t many athletes that get the distinction of being the first to able to do something. But John ‘Fergy’ Ferguson is widely recognized as the first real enforcer. The Canadiens brought Ferguson in to protect Jean Beliveau and, in his first game, he won a scrap with ‘Terrible’ Ted Green. Combine that with the fact that he led all NHL rookies in scoring, and the Canadiens found themselves with the talent they needed to dominate. Ferguson’s intimidating presence helped the Canadiens win five Stanley Cups and, his punching power was so legendary that he was once dared to fight Canadian heavyweight boxing champion George Chuvalo. Ferguson was willing, but the Canadiens had other plans for their enforcer. Goals, Cups, and lunchboxes for hands are the reasons Ferguson is the Enforcer Olympics Silver medalist. 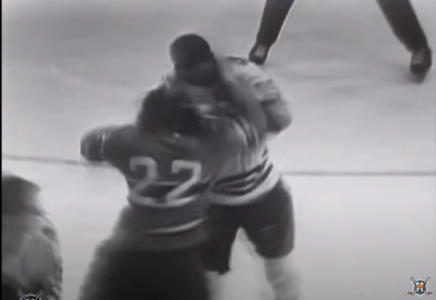 Karma – the sum of a person’s actions in this and previous states of existence, viewed as deciding their fate in future existences.

I don’t know Eric Nesterenko from Adam, but when you two-hand chop a guy’s head with a stick and then immediately get dropped, you have to think karma’s a factor. Thankfully, Nesterenko was able to skate off after dropping-the-gloves with Fergy, because he got fed some absolute bombs. The fight started after Nesterenko took exception to Ferguson’s hit along the boards and responded by wielding his stick like an axe to take Ferguson’s head off. That’s when Fergy snapped! He grabbed the “Hawks’ forward and dropped him with two massive rights. The former Cleveland Baron must have been seeing red because he fired off a few more punches while Nesterenko was bloodied on-the-ice. Our Silver medalist sent a message with this scrap, and it turned the Stanley Cup series around for the Canadiens. The Habs cruised to a 6-0 win after the melee and downed the ‘Hawks with a 4-0 win in Game 7. That’s the Fergy effect.

I always laugh at the start of this video because it’s hilarious how Ferguson could have easily avoided running into Johnny Bower, but he made sure he didn’t. Fergy wanted to end the 7-2 blowout win with a bang, and Kent Douglas was the target. In this scrap, the two started with a few chirps, and then without hesitation they both dropped-the-gloves. Besides his strength and power, Ferguson’s best attribute was his ability to land five punches in a blink of an eye. Douglas witnessed this speed first-hand, and it looked like even Ferguson’s teammates were trying to limit the damage by holding him back. There was no love lost between these two teams, and the fans got to reap the benefits of this rivalry. Ferguson and the Canadiens gave the Leafs a beatdown on-the-ice and on the scoreboard. The Canadiens mélange of talent and intimidation helped them win back-to-back Stanley Cups, and our Silver medalist was a perfect combination of both.

In hopes of landing a gem, leams tend to take flyers with their late-round draft picks. Our Gold Medalist was drafted in the 19th round of the 1978 NHL Entry Draft and played a decade for Le Bleu-Blanc-Rouge. Only Rick Wilson, Louis Sleigher, and Douglas Robb were drafted after Chris Nilan, and I’m sure there a few Bruins executives kicking themselves for not taking a gamble on a hometown kid. Nilan knew his role, and unlike many enforcers, he seemed to genuinely enjoy doing it. ‘Knuckles’ never hesitated coming to the defense of his teammates. This is likely why that even in his rookie season, the entire team flew to Boston for his wedding. I doubt a lot of rookies are getting that kind of support, but Nilan was always there for them, so they knew they needed to be there for him. This special team chemistry resulted in Nilan and the Canadiens beating Calgary to win the 1986 Stanley Cup. Knuckles has been open about his battles with addiction and his sincerity and honesty made him the lead story in the 2011 documentary – The Last Gladiators. The former Northeastern University alumnus racked up over 3000 penalty minutes in his 13-year career and still holds the distinction of being the most penalized American-born player. Not too shabby for a 19th rounder.

Don Jackson obviously didn’t know Knuckles was on-the-ice when he delivered a high-stick to Guy Carbonneau, because it doesn’t take a genius to know what would happen if he was. Credit to Jackson for quickly answering the bell, but this scrap was all Nilan. Our Gold medalist was able to get inside on the Oilers’ big-man and started the bout with a few sneaky uppercuts. While Jackson was able to get Nillan’s helmet off, his right-arm got stuck in the process, and that gave Nilan the opening he needed. The Habs enforcer unloaded three huge right hands and when Jackson ducked to avoid the flurry, Nilan ended the scrap with four thunderous uppercuts. Jackson was lucky the linesmen jumped in when they did because Nilan wanted to send a message. If you took liberties with any of his teammates, Knuckles was like the Boogie Man, he always appeared. This looming presence allowed the Habs players to play without fear and helped them bring the Cup back to Québec. 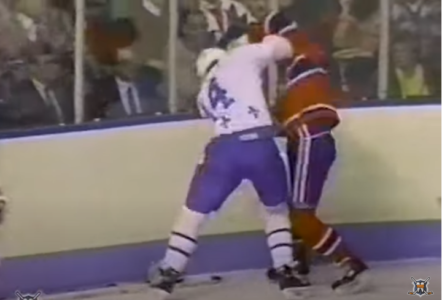 It breaks my heart that we lost the Battle of Québec. The Habs and Nordiques hated each other in the 80s, and that resulted in some absolute bloodbaths. Gord Donnelly and Nilan danced twice in this game and those that have seen Knuckles play should know why. The Nordiques enforcer bested Nilan in their first scrap, and our Gold medalist tended to always try and even the score. After Donnelly gave a cross-check to Nilan along the end-boards, Nilan seized the opportunity for round two. He started the bout strong with two big left hooks and after a few moments of grappling, Nilan landed a big right uppercut. While Donnelly landed a few hammer punches to the Habs tough-guy, Nilan’s huge body-slam gave him the win in this scrap. The thought of the Nordiques being added to an already intense North Division gives me goosebumps. It sucks we’ll never get to see Nilan drop-the-gloves again, but fingers crossed we get another chance to watch the Battle of Québec.

This concludes the Montreal Canadiens Enforcer Olympics. Honorable mentions have to include Shayne Corson, Todd Ewen, Donald Brashear, Mario Tremblay, Stephane Quintal, and even ‘Rocket’ Richard. It was tough to leave John Kordic off the podium, but if you want to read about the warrior, check out his Enforcer Advent Calendar. The Canadiens are the most storied club in the NHL, which makes picking three so damn hard. Let us know who you would have on your podium and tune in next week when we head to Cowtown to pick our medalists for the Calgary Flames.