Hockey Fights is an entertainment site with no direct affiliation to the National Hockey League, its teams, or NHLPA
Home > Originals > Enforcer Olympics – Chicago Blackhawks

There are only a handful of teams that have a history like the Chicago Blackhawks. To put it in perspective, Henry Ford established the 40-hour workweek, Harry Houdini died and Winnie-the-Pooh was written the same year the ‘Hawks made their franchise debut in the famed Chicago Coliseum. Ironically, as we just celebrated St. Patrick’s Day, on November 17, 1926, the ‘Hawks’ first opponent was the Toronto St. Patricks. As a student of history, I find it humbling to think about our hockey forefathers lacing ‘em up nearly 100 years ago. The ‘Original Six’ paved the way for Chicago to, not only witness some incredible games, but see a plethora of gladiators drop-the-gloves while donning the iconic Blackhawk logo on their chest. That’s why the rich history of the ‘Hawks made this segment so damn hard. There are a ton of dudes who are more than deserving to take their spot on the podium, but these are my medalists for the Enforcer Olympics. Regardless if you agree or not, all of them deserve the utmost respect. So, enough messing around, it’s time to get our Arethra Franklin on.

Alan Alda, Alan Thicke and Allan MacInnis are all famous in their own right but, when you come to Chi-Town, the only Alan that matters is ‘Big Al’ Secord. While the Ontario native started his career with Boston, after his wild 8-year run alongside Denis Savard and Steve Larmer, he’s a ‘Hawk for life. In fact, in his first two seasons with Chicago he played every single game and racked up 98 goals, 161 points and 483 penalty minutes. Combine that with dropping-the-gloves 92 times in the Windy City, and it’s clear that the former first-rounder is well-deserving of having the Bronze medal in the Enforcer Olympics hanging around his neck. If any fans want to show their respect to Big Al, I suggest booking your next flight with American Airlines because Secord is currently flying-the-skies as a pilot for the double-A airline. Goals, fights and cruising the skies, what can’t this man do?

If I had a time-machine and could transport myself back to a Saturday Hockey Night in Canada game, this one would definitely be on the list. The ‘Hawks and the Leafs set a record by taking only 84 seconds to score 5 goals, leading to a combined 18 goals scored during the game. But we’re not here for goals. We’re here for the fights. Secord was obviously never one to stand-and-trade, but he definitely landed a couple sneaky lefts in this bout. That included one right between-the-eyes as the linesmen had the warriors tied up. You could tell how rattled Korn was with the cheap shot and Secord was never one to back down…so I’m guessing if they would have had the chance to dance again that night, neither of them would have hesitated. Luckily for fight fans, this was only the 5th game of the season, so they got to enjoy an entire year of this rivalry.

I think it’s fair to say you’re instantly anointed as a warrior if you’re helmetless while the majority of the team has their bucket on. In this scrap, both Brad Smith and our Bronze medalist wanted the crowd to see their sick flows while watching them get after it. And they did exactly that. While the linesmen tried to break the two fighters up, Secord started the bout off by firing a couple of sneaky lefts. Smith responded with two slick uppercuts, to which Secord answered back with several overhand lefts that somehow didn’t hit the linesmen, who were brave enough to stand between the two monsters. This may not have been a highlight reel scrap, but Secord’s hockey-temperament allowed the ‘Hawks stars to play without fear. They knew he would not only protect them, but fire home some goals in the process. Hence why the ‘Hawks went home with a 9-5 win, that included 9 points from Secord, Larmer, and Savard. That toughness and ability to produce is why Secord had to be given the Bronze medal in the Enforcer Olympics.

‘The Grim Reaper’ may have only spent three seasons in the Windy City, but the fights he had during the 1991-92 season made him a no-brainer medalist in the Enforcer Olympics. Besides having one of the best nicknames in sports history, he arguably fought during one of the toughest eras in NHL history. Don’t believe me? Imagine scrapping Tie Domi, Bob Probert, Marty McSorley, Gino Odjick, and Rob Ray in the same season, and coming out on top in many of them. The former 7th rounder made the decision to go get an education at the University of Manitoba because, on top of wanting to enjoy his chance to play hockey without fighting, he had the foresight to plan for his post-playing career. The enforcer-turned-lawyer’s self-awareness is something truly special, and he knew he needed to throw bombs if he wanted to stay in the league. And after getting his orbital bone broken by Dave Brown in his rookie season, he knew he needed to get better at fighting. Luckily, he did exactly that during his time in Chicago. But, let’s be honest, you don’t get bestowed the nickname Grim Reaper by accident: standing at 6’5” and weighing in at 230 lbs, it clearly came from Grimson’s dominating size and power. This guy is more than worthy of being the Enforcer Olympics’ Silver medalist. 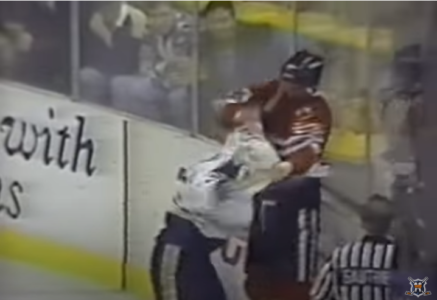 I’m pretty sure delivering a cross-check to the face is a sure way to get a fight started. And to make sure his team ended a disappointing 4-1 loss with a BANG! Grimson did just that. That Wednesday night in Buffalo, the Grim Reaper followed his blatant cheap-shot up with 13 unanswered right hands to the Sabres legend. He landed blows until Ray was able to do his best Goldberg impression and spear our Silver medalist to-the-ice. While the cross-check may have dazed Ray to start the scrap, it’s clear that Grimson’s fight IQ had improved from his days in Alberta. He wisely used his 5-inch reach advantage like a pro. In a fit of irony, this fight was one of the only times that Ray’s opponent was shirtless and he wasn’t. Maybe Rob Ray’s jersey was his kryptonite, because Grimson handled him with ease in this one-sided affair.

There’s no better way to celebrate Boxing Day than with a couple of legends throwing down less than a minute into the game. Shame on any fans who showed up late to the Chicago Stadium that night, because they would have missed some absolute bombs getting tossed around. We all know replays are never as good as seeing a scrap live, which is why I’m definitely envious of the fans that got to watch this tilt live. In this bout, Grimson used his reach advantage to lock-in his grip and fire off 6-huge overhand rights and a vicious body-shot. But Chase was no punk, and responded back with three big left-hands of his own. Grimson was able to regain the advantage when he channelled his inner southpaw. Although he missed two left-hooks, he ended the fight by taking Chase to-the-ice. While the Blues left victorious when Brendan Shanahan and Brett Hull set up Murray Baron for the overtime winner, our Silver medalist’s fight-confidence was clearly growing. This is likely why he was able to rack up over 2000 penalty-minutes and spend over a decade intimidating his opposition. And even though he was ruthless on-the-ice, he was, and continues to be an absolute class-act off it.

Keith Magnuson may have been born in Saskatchewan, but he was Chi-Town through-and-through. The former Saskatoon Blade played his entire 11-year career in the Windy City. While he only tallied 14 regular-season goals, with 1440 penalty minutes he made the penalty box his home-away-from-home. This remains the second-most penalty minutes accrued in ‘Hawks history and, with the way the game has changed, that record isn’t going anywhere. After finishing his playing career, Magnuson made the jump behind the bench as an assistant coach in 1979 and took the reigns as head coach during the 1980-81 season. This wove Magnuson into the fabric of the ‘Hawks history, which is why it was fitting that Chicago raised ‘Maggie’s’ jersey to the rafters after his tragic auto-accident in 2003. Magnuson rocked the ‘C’ for four years, and now we can add an Enforcer Olympics Gold medal to an already impressive resume. 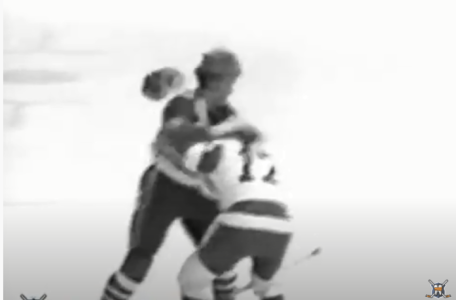 “Jarry isn’t backing down!” Well, on that Sunday night in “The Old Red Barn” he should have, because our Gold medalist gave the former 1st round pick a flurry of right-hands that nobody could have handled. As I’ve said before, there’s something about watching scraps in black-and-white that just gives me goosebumps. It’s the same feeling as when you see those old pictures of people riding ski lifts without safety bars, and looking at the famous ‘Lunch atop a Skyscraper’ photo. Magnuson was amongst the generation that were just cut from a different cloth. The ‘Hawks d-man never showed any fear and, while he may not have been the most skilled, Chicago fans knew he’d give 100% night-in-and-night-out. And as fans who dish out our hard-earned cash to watch a game live, isn’t that all we can really ask for? Thanks to Magnuson tossing some bombs, this scrap was over before it started. Luckily, the fans at the Olympia Stadium got to see a thrilling 6-6 tie and were given an entertaining end to a hard work week.

Honestly, this is one of my favorite videos ever because Vadnais was feeling on top of the world after absolutely demolishing Magnuson with a monstrous hit. But, as John Heywood’s 1546 proverb states “He who laughs last, laughs longest” … Magnuson was absolutely howling after these two finally locked up. Credit to the linesmen for trying their darndest to keep these two from dancing because they knew what would happen if they didn’t. Fortunately for fight fans, at the 2:20 mark in the video, the linesmen said “Ah, F*ck it” and let these two gladiators throw-down. In this scrap, Vadnais was able to land two-rights, but our Gold medalist was too much for the Oakland Seals defenseman to handle. Magnuson let off three vicious right-hands that buckled Vadnais’ and, because of the hit earlier in the game, Maggie made sure to give a couple more jabs when Vadnais was on-the-ice. True to form, To the victor goes the spoils, and Magnuson and the ‘Hawks left town with a TKO and a 4-0 shutout win.

Okay, let’s address the elephant in the room. I obviously left Bob Probert off the list, but that’s because, to me, he’ll always be Detroit’s baddest dude. So, spoiler alert, Probey is going to have a medal around his neck when we get to do Detroit’s Enforcer Olympics. Honorable mentions have to be given to Behn Wilson, Dave “Charlie” Manson, Cam Russell, Ryan VandenBuscche, and Bob McGill.  Considering the ‘Hawks storied history, there are countless gladiators who have thrown down in Chi-Town and they all deserve our respect and admiration. This is what makes picking only three so damn tough. Next week won’t be any easier because we are going to award some medals to the last team to raise the Cup in Canada – The Montreal Canadiens. Tune in next week to see who gets a spot on the podium in one of Canada’s most beautiful cities.