Hockey Fights is an entertainment site with no direct affiliation to the National Hockey League, its teams, or NHLPA
Home > Originals > Enforcer Olympics – Carolina Hurricanes/Hartford Whalers

On this week’s installment of the Enforcer Olympics, we travel from Hartford, Connecticut to Raleigh, North Carolina. The youngsters may not remember the beautiful green jerseys of the Whalers, but those that remember “The Forever .500” know that 1997 was the last time pro hockey was played in Connecticut. Hartford was the smallest American market and with an arena capacity of 16,000, the odds were constantly stacked against them. Despite assurances from owner Peter Karmanos and a valiant ‘Save the Whale’ campaign, the Hartford Whalers became the Carolina Hurricanes. In 2006, the Hurricanes brought North Carolina their first major sports championship when they defeated the Edmonton Oilers in a thrilling seven-game series. The Whalers/Hurricanes may not have the most storied past, but they certainly have had some tough dudes drop-the-gloves. So without further ado, let’s celebrate some warriors.

Our Bronze medalist is none other than Tim Gleason. The former American defenseman suited up for the ‘Canes for 9.5 seasons and tallied over 30 fights and 500 penalty minutes. Similar to other NHLers, Gleason played in the prestigious Québec International Pee-Wee Hockey tournament for the Detroit Little Caesars squad. The Michigan native went on to play four successful seasons with the Windsor Spitfires and garnered attention from NHL scouts. The Senators selected Gleason 23rd overall in the 2001 NHL Entry Draft, but due to a contract dispute, he never suited up in the nation’s capital. After a brief stint in Los Angeles, Gleason made Carolina his home away from home. The gritty defenseman may have only racked up 17 goals in his NHL career, but he etched himself into Hurricanes folklore when he took a puck to the face, quickly got stitched up, and scored the game-tying goal against the Capitals in 2009. Gleason is currently serving as head of the ‘Canes Defensemen Development and his mentorship has helped propel Carolina to the third-lowest goals against, and the best record in the league. 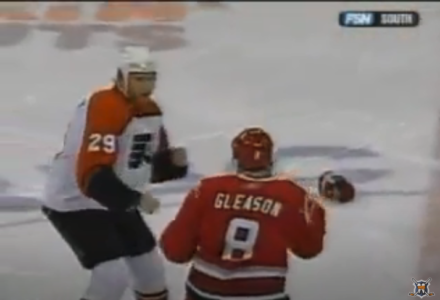 Ray Whitney may not have acted alongside Robert De Niro and Sean Connery, but Gleason made sure everyone knew he was still ‘Untouchable.’ That’s why the second Fedoruk took liberties with Whitney on that Thursday night in Raleigh, Gleason gave him a friendly reminder that kind of nonsense wasn’t going to fly. The two locked up after the whistle and the former first-rounder dominated the Flyers’ big man. Gleason started the scrap with a huge right punch and followed it up with a series of jersey-jabs. Fedoruk was visibly shaken and tried to answer back with a huge right hook, but Gleason was too quick. He ducked the haymaker and landed two bombs of his own. The ‘Canes enforcer followed that combo up with three more right hooks before wrestling Fedoruk to the ice. Gleason was never known for his on-ice speed, but his fast hands made him so difficult to fight. The Hurricanes got the overtime win and Gleason made sure Whitney and the rest of his squad remained Untouchable.

Credit to Kulemin for coming to the aid of his teammate, but in hindsight, he probably shouldn’t have. The big Russian got mixed up with our Bronze medalist at the end of the 1st period and was given a harsh reminder of Gleason’s strength. The two exchanged a few gloved punches until Gleason had enough of the foreplay and unloaded a devastating right uppercut. The fans at the RBC Center erupted when it took only one punch to not only drop Kulemin but also break the Russian’s nose. That’s why I feel bad for any fans that headed to the concession stands early because they would have missed their assistant captain’s domination. This scrap swung the momentum in Carolina’s favor and they rode that momentum to a dominant 6-4 victory.

Our Silver medalist may have only played 2.5 seasons in North Carolina, but he was still able to rack up 286 penalty minutes and over 30 fights. The New York native was selected by the Philadelphia Flyers in the fifth round of the 1996 NHL Entry Draft and literally fought his way to the NHL. The former enforcer spent time in the OHL, ECHL, and the AHL before finding a home in Carolina. Boulerice played an aggressive game, which sometimes landed him hot water. Most notably, when he delivered a vicious cross-check to the face of Ryan Kesler which resulted in a 25-game suspension. In his final season, he was suspended 10 games for deliberately running over an AHL referee. In the end, our Silver medalist’s role was diminished when the NHL started implementing stricter penalties for instigating fights. After retiring in 2011, Boulerice joined Merrill Lynch as a Senior Financial Advisor and continues to call Raleigh home. 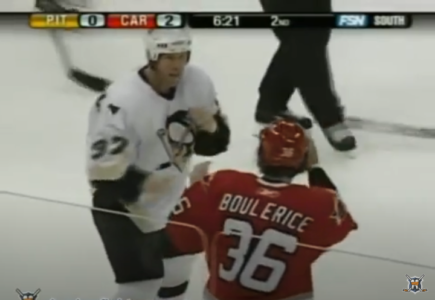 The Penguins were down two and VandenBussche was eager to jumpstart his squad, while our Silver medalist was looking to keep his spot on the roster. This is what we call a mutually beneficial scrap! The two gladiators locked up and started trading some huge blows. Boulerice got the jump with a big left jab and a massive uppercut. VandenBussche was able to answer back with a few right hooks, but once Boulerice was able to get the death grip on VandenBussche’s shoulder pad it was over. Our Silver medalist unloaded four massive punches and if the linesmen hadn’t jumped in, it would have been a hell of a lot more. My favorite part of the fight is when the camera pans to the crowd and you can see kids jumping up and down with excitement. The Penguins were able to rally and tie the game after this scrap, but it was Boulerice and the ‘Canes who had the last laugh with a 3-2 shootout win. That’s why they say there’s nothing better than a Friday night win in rowdy Raleigh.

These two warriors wanted to dance, and they sure as hell weren’t going to let a linesman get in their way. Neil started the scrap by pinning our Silver medalist against the glass and when Boulerice lost his balance, it looked like the fight was going to be over before it started. Luckily for fight fans, Boulerice shrugged off the linesman and the two gladiators were able to get back on their feet. There weren’t many punches thrown in this battle because it only took one massive right hook to drop Ottawa’s tough guy. The fact that Neil was known for having one of the toughest chins in the league makes this feat even more impressive. Thanks to three power-play goals, Ottawa sent Carolina home with a loss and our Silver medalist sent Chris Neil looking for an ice pack.

During his 5.5 seasons in Connecticut, our Gold medalist dropped-the-gloves over 100 times, amassing 1300 penalty minutes, including a career-high during the 1985-86 season with 358. Before being drafted by the Washington Capitals in the third round of the 1980 NHL Entry Draft, Robertson dominated the WHL. During his time with the Victoria Cougars, Robertson tallied 41 points, 47 points and then in his final year jumped up to 111 points. His ability to score and fight made him a sought-after commodity for NHL teams looking to add a strong power forward. Due to a lack of playing time, the British Columbia native was never able to find his footing in the nation’s capital. That’s why our Gold medalist welcomed the 1983 trade that landed him in Hartford. Robertson flourished in the green and white, most notably when he linked up with Greg Malone and Bobby Crawford. Unfortunately, his momentum came to a crashing halt after he broke two bones in his leg during a scrap with Shayne Corson. Robertson racked up the most fights in Whalers history and is the all-time penalty minutes leader. These two achievements, combined with Robertson’s fearless play make him more than deserving to be our Enforcer Olympics Gold medalist. 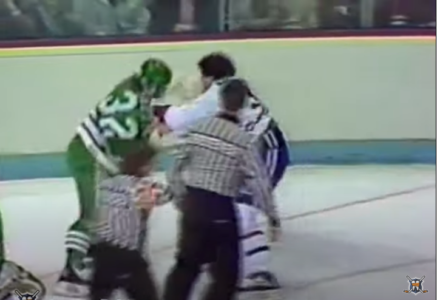 During the 80s, there were a handful of guys who struck fear in the hearts of their opposition. While John Kordic was one of those dudes, Gold medalists never backed down from a scrap, no matter how intimidating their dance partner may be. While jostling for position, the two warriors traded a series of jabs and hooks. Robertson gained the upper hand when he was able to get Kordic’s jersey over his head and land a massive right hook. The announcer takes offense to Robertson grabbing hold of Kordic’s hair, but it’s a lot easier to have that opinion when you’re sitting in the stands. While our Gold medalist may not have had the most thrilling fights, he never backed down during an era that boasted some of the toughest enforcers the league’s ever seen. The momentum instantly shifted in Hartford’s favor after this scrap and thanks to a 3-point night from Stew Gavin, the Whalers started the playoff series with a dominant 4-1 win. Unfortunately, the Canadiens had the last laugh when they sent the Whalers home in Game 7 of their Adams Division Finals.

While I was never fortunate enough to see a Saturday night game in the famed Montreal Forum, if I had been, seeing Chris ‘Knuckles’ Nilan and Torrie Robertson throw down would have been on the top of my list. The Whalers were up 3-1 when these two legends decided to throw down. This scrap may not have yielded a ton of big blows, but Robertson was able to land some sneaky inside jabs to the back of Nilan’s head. The Canadiens enforcer answered back with a couple of right hooks until our Gold medalist took control of the fight. Robertson landed a few body shots and a big uppercut before the two gladiators tumbled to the ice. Nilan wanted to jumpstart his team and it worked. The Habs rattled off four straight goals to take a commanding 5-3 lead heading into the 2nd intermission. But in the end, the Whalers played spoiler with four unanswered goals and left Montreal with a thrilling 7-5 win.

This concludes the Hartford/Carolina Enforcer Olympics. As always, numerous warriors are deserving to stand on the podium. But alas, there can only be three. Honorable mentions need to be given to Craig Adams, Darren Langdon, Brad Malone, Mark Janssens, Kevin Dineen, and Kelly Chase. Join us next week when we travel to the desert to shine some light on the Arizona Coyotes. Will Biznasty make an appearance? Tune in to find out.