Hockey Fights is an entertainment site with no direct affiliation to the National Hockey League, its teams, or NHLPA
Home > Originals > Enforcer Olympics – Calgary Flames

The Flames arrival in Calgary is a feel-good story for everyone… except Atlanta. In May 1980, the Flames were bought from Atlanta by Nelson Skalbania and a group of local businessmen. These men included Doc and B.J Seaman, Harley Hotchkiss, Ralph Scurfield, Norm Green, and former Calgary Stampeder – Norman Kwong. Kwong was a Calgary legend with accolades that included being the first player of Asian descent to play in the CFL and was the 16th Lieutenant Governor of Alberta. The Flames are a huge part of Calgary’s history, and so are their enforcers. And what better way to celebrate the Flames 40th season in the league than shining light on some of the toughest dudes to drop-the-gloves in Cowtown. There are only three spots on the podium, which means there will be some obvious omissions, but everyone has their list, so let’s hear yours too!

This was a tough one because Chris Simon only played two seasons in Calgary. However, in that short stint, he gave the fans at the Saddledome some epic bouts. Besides, Simon was one of the toughest enforcers in the history of the game. Obviously, there’s no denying that his legacy has been tainted by his numerous suspensions and personal battles. The former second-round draft pick racked up 1824 penalty minutes during his 18 seasons in the NHL. Most notably, he racked up a career-high 250 and won the 1996 Stanley Cup with the Colorado Avalanche. Despite his history of dirty plays, this podium is meant for any enforcer that never hesitated to drop-the-gloves and stick up for their teammates. Simon always did that and rarely lost a battle. This makes him more than deserving to step up and receive his Bronze medal in the Enforcer Olympics. 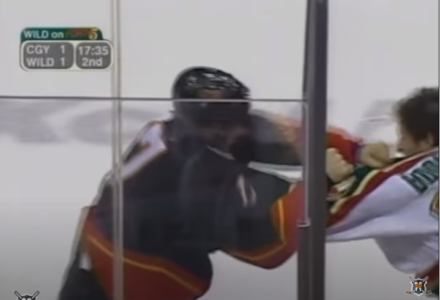 This was the definition of a heavyweight scrap. Chris Simon played at 6’3,” 200 lbs, while the legendary Derek “Boogeyman” Boogaard played at 6’7,” 256 lbs. That’s why there wasn’t a quiet fan in the Xcel Energy Center when these two gladiators dropped-the-gloves. The two gave each other a little stick work at the draw and Boogey grabbed Simon against the boards. At first, it looked like Simon didn’t want to dance, but he once they started trading blows, he did more than hold his own. The former Ottawa 67’s was able to quickly get Boogaard’s helmet off and landed three massive left-hands as soon as he was able to create some space. Simon followed his initial flurry of punches by showcasing his boxing skills. And he should be thankful he did, because if he didn’t duck Boogey’s huge overhand right, he could have easily been dropped. The two exchanged a couple more jabs each until they lost their balance. The Flames left St. Paul with a 4-1 win, and Simon left knowing he stood toe-to-toe with the Boogeyman.

This scrap was one of those rare times where I had to rub my eyes because it didn’t feel real seeing Parros without legendary ‘stache. The Princeton alumnus wanted to scrap Simon and even did a change on the fly to make sure it happened. Unfortunately for him, Simon absolutely dominated the Kings enforcer. Once the two finally locked up, Simon started the dance by landing a vicious left-jab. He followed that up by throwing 13 massive left-hands and connecting on about 80% of them. Credit to Parros for being able to land a couple of right hooks amidst the beat-down, but this scrap was all Simon. As mentioned in previous pieces, these enforcers put their life on the line for the entertainment of fans. That’s what makes it so heartbreaking when the life of an enforcer spirals out of control. I hope Simon can overcome his financial and personal troubles because he was one of the toughest guys to ever don the C on his chest.

During his 15 seasons in the NHL, Sandy McCarthy racked up 1534 penalty minutes by fighting the likes of Bob Probert, Stu Grimson, Donald Brashear, Tie Domi, and Marty McSorley. That’s quite the Rolodex of scraps, and McCarthy held his own against all of them. The former Laval Titan was a menace from the second he arrived in Cowtown. Whether it was scrapping, delivering huge hits, or striking fear in the heart of the opposition, you always knew when McCarthy was on the ice. After hanging up his skates, the President of the Woodstock Slammers in New Brunswick recruited McCarthy because “he is a motivator who has strong beliefs in detection and discipline.” After spending time as an assistant on the coaching staff, McCarthy was promoted to head coach. The Toronto-born enforcer currently sits fourth for most fights by a Flame and I think it’s safe to say that’s a record that’s not going anywhere. Hence why he’s earned his spot on the Enforcer Olympics podium. 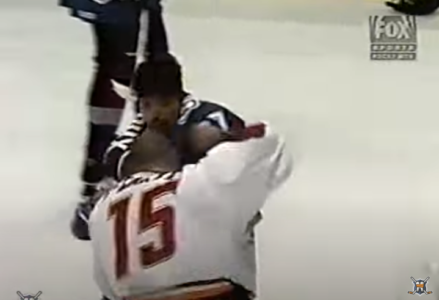 There’s nothing I love more than seeing two heavyweights stand-and-trade bombs while maintaining the fighter code at the end of it. The fact that these two had such a fierce bout should come as no surprise, but that it was in the second game of the season makes it even that more amazing. This scrap started in the third period of a blowout game when frustrations had clearly boiled over. The two gladiators exchanged blows for 20 seconds straight until McCarthy was able to get the upper hand with some big rights to the back of Leroux’s head. That’s when the code came in. McCarthy told the linesmen to jump in and end the battle. This fight was clearly in the Saddledome because the crowd erupted when McCarthy threw up a fist in victory as he cruised to the box. The Avalanche got the 4-1 win, while Flames fans got to enjoy a last-minute melee. Not a bad trade-off.

There aren’t many enforcers that can say they fought a legend in their first season in the league. And there are even fewer that can say they won. At the start of this scrap, the rookie looked like he didn’t want to fight Probert, but Probey didn’t care. The Wings legend jumped McCarthy and snuck in two right hooks. Maybe McCarthy heard the announcers say “he’s going to play soft on this one,” because he responded with the furthest thing from soft. After some grappling, McCarthy was finally able to get his left hand loose and land four huge hooks. He followed those bombs up with some sneaky right uppercuts that shook the legendary enforcer. Kudos to the linesmen for letting the two gladiators dance as long as they did because they both were able to trade a few more big jabs. Unfortunately, the fight ended quickly when Probert busted out the ol’ headbutt trick. Probert was given a game misconduct for an attempt to injure but ironically looked worse for wear. The game may have ended in a 3-3 tie, but beating a legend must have had McCarthy feeling like he left Motor City a winner.

Imagine getting drafted by the Atlanta Flames, honing your skills in the AHL and CHL, but before you get to make your NHL debut, the club gets moved to your hometown. It’s like a hockey fairytale. Well, Tim Hunter got to live out that dream, and frankly, it couldn’t have happened to a better guy. Not because of his hilarious Pat Quinn story, it’s that Hunter holds the Flames record for penalty minutes and most fights, and he did it all with class. That’s why it’s fitting to award the Gold medal in the Enforcer Olympics to a Calgary native who proudly wore the hometown Red for over a decade. The enforcer-turned-coach was a member of the 1989 Stanley Cup team and after 17 seasons in the NHL, he set his sights on coaching. And didn’t waste any time doing so. The season after he retired, Hunter took an assistant coaching position with the Washington Capitals. After 15 seasons with the Capitals, Sharks, and Leafs he made the jump to head coach with the Moose Jaw Warriors. Hunter may have been relieved of his position last January, but he was able to lead the Warriors to 4-straight playoff appearances before his departure. The man already has a Stanley Cup, but now he’s got the Gold Medal in the Enforcer Olympics. 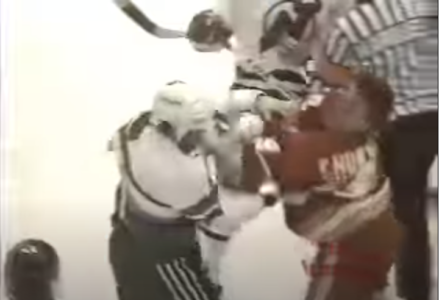 A large reason Hunter earned the Gold medal is that he chucked bombs. I’m sure David Maley would agree with me after this scrap. Hunter had already squared off with Joe Cirella in the 1st period and decided to crush Maley in the 2nd. The two squared off near the blueline and Maley started the bout strong when he landed a few decent left hands, including a clean one on Hunter’s chin. However, Hunter never had a glass-jaw, so he was able to withstand the initial onslaught until he was finally able to get his right hand loose. That’s when he unleashed a flurry of uppercuts, including one that could have been a jaw-breaker if it landed clean. Our Gold medalist followed that combination up with some huge right hooks. The best part of this scrap is when Hunter skated to the bench with a huge shit-eating grin. Whether that’s because the Flames had a dominant 5-1 win, or maybe it was that he just laid the smackdown in the other team’s barn. Only Hunter knows. Either way, great scrap.

There’s only one thing better than a good scrap, a Stanley Cup Finals scrap. So expectations were high when Hunter and Kordic threw down in Game 3. And they sure as hell didn’t disappoint. While there were no massive blows landed, these two warriors threw hands for a minute straight. Don’t think that’s hard? Go hit a punching bag for a minute straight and tell me you’re not tired. Oh, and then imagine someone trying to TKO you at the same time. That’s what makes this fight so impressive. Kordic started the bout off strong by landing a series of left hooks. But like a true Gold medalist, Hunter was able to keep his composure and responded with a flurry of uppercuts and a body shot in the process. This scrap had a lot of grappling because both enforcers were so strong and were able to restrict the other while they danced. That’s why the fight started at the red line and ended up back by the blue line. Overall, the judges would call this a draw or maybe give a slight edge to Kordic. But as we know from the sad story of John Kordic’s passing is he wasn’t always playing fair. Regardless, both warriors threw some bombs and gave the fans at the Forum something to cheer about.

This concludes the Calgary Flames Enforcer Olympics. We couldn’t name every enforcer to ever throw down in Cowtown, that’s why we have to give honorable mentions to Eric Godard, Brian McGrattan, Ronnie Stern, Jim Peplinski and loads more. If you want to read about Krzysztof Oliwa check out his piece in the Enforcer Advent Calendar. Next week we travel to the home of the White House. The Washington Capitals have had some big boys drop-the-gloves over the years, so this will be an interesting one. As always, let us know your list because it’s damn near impossible to have a complete consensus on such a subjective question. But isn’t that the fun part?