The December Enforcer Advent Calendar continues with some legends you may know, and some you may not. Just like the Advent Calendars you opened as a kid, you might find a chocolate reindeer, candy cane or bell, you never know, it’s all random! This calendar is no different, you never know what enforcer you’re going to open up and find. Every enforcer that appears in this calendar was/is a warrior and should be applauded for their battles on-the-ice and off. For many of you, this will be a reminder of some of your favourites, for others, you may learn something about a player that you didn’t know. Either way, let’s have some fun celebrating these fellas! 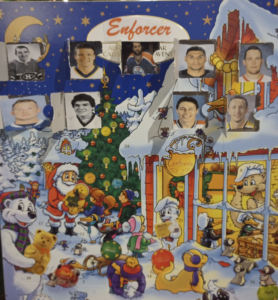 They don’t make them much tougher than Krzysztof “The Polish Hammer” Oliwa, and by proxy he made the NHL a hell of a lot tougher. The Tychy native overcame countless obstacles before he was able to entertain fight fans and intimidate his opposition. The normal schedule for Oliwa as a teenager was as follows:

Far cry from the life of an AA or AAA prospect in North America, but that’s what Oliwa had to do. When asked about his time working in the mines, all he could say was, “My friends got hurt, they got hurt bad. They lost their fingers because somebody made a stupid mistake. They were repairing a machine and then somebody plugged it in and then cut off their fingers.” Oliwa was one of the lucky ones and did everything he could not to squander his opportunity for a better life. After being encouraged to come to Canada to try out for a Junior B team in Ontario, he was immediately thrown into a foreign land without knowing any English. Oliwa put his pride aside and started attending a high-school with students 5-years younger than him because he knew that to be a successful player, he needed to improve his English. His perseverance culminated into getting drafted 65th overall by the New Jersey Devils in the 1993 draft. This anointed Oliwa as the first Polish-born player to be drafted into the NHL. “The Polish Hammer” also remains the only Polish-born player to ever raise the Stanley Cup. Pretty impressive for a coal-miner. 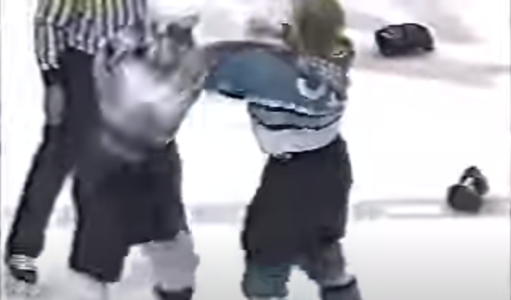 Not very impressive eh? Oliwa didn’t think so either. That’s why he started the 1997-98 season looking to make his impact felt immediately, and who better to have as an opponent than Mr. Marty McSorley. Granted, he wasn’t taking on The McSorley from the Oilers or the Kings but, still standing as a proven enforcer, he was the perfect opportunity for Oliwa to establish some NHL respect. The two clashed after Oliwa “accidentally” ran into McSorley on the way to the bench. Oliwa was able to land a good right hand to start, but once McSorley was able to get his bearings the “Polish Hammer” wasn’t able to land a blow. Both enforcers constantly jostled for position and, knowing the young fella outweighed him by 35 lbs., McSorley knew he couldn’t let him get his arms loose. Oliwa was fairly new to the fighting game and, in hopes of improving his skills, took boxing and karate classes during the previous offseason. He knew that if he traded with McSorley he would likely be on the losing end. Both warriors deserve credit in this bout, but for different reasons. McSorley was in his 17th season as an enforcer and could have easily shrugged off the advances of the rookie. Oliwa was a huge kid that could have picked a much smaller, less experienced opponent. But the life of an enforcer didn’t afford them the luxury of picking their battles and both performed admirably that Saturday night in East Rutherford.

The animosity between Slovakia and Poland goes back to Slovakia’s participation in the Poland invasion of World War 2. These two enforcers may have been born after that tragic time period, but it’s clear the animosity remained. An All-European bout was rare in the 80s, 90s, 2000s… hell, they’re still rare…but these two gladiators knew they had to step-up to keep their spot in the lineup. This wasn’t the most exciting affair, but standing at 6’5” and 235 lbs, finding opponents willing to trade with Oliwa were far-and-few-between. Luckily, his European brethren was 6’5” and 251 lbs., making this a true heavyweight battle. Oliwa was in his first season with the Pens’ and clearly took exception to the hits Mezei had delivered to Mario Lemieux earlier in the period. If your name wasn’t Princess Peach, you weren’t allowed to touch Super Mario. That’s when Oliwa gave Mezei a few cross-checks near the Islanders bench in hopes of instigating the former Belleville Bull into a scrap. Mission accomplished. Mezei landed one quick right at the start of the tilt, but Oliwa followed up with a big right of his own. The “Polish Hammer” was too strong for Mezei and was able to quickly jersey him. Oliwa threw a huge right hand – had it connected, would have TKO’ed the Slovak. Fortunately for all of Slovakia, he ended up punching air. The former Islanders first-round pick was upset with the game misconduct for his jersey coming off, but he should be thankful it did. Oliwa was way too strong for the Slovak and, had the linesmen not intervened as quickly as they did, could have inflicted some serious damage. The Islanders left Mellon Arena with a 3-1 win, while Pittsburgh (in Lemieux’s comeback year) would go on to lose in the Eastern Conference Finals to the New Jersey Devils and continue their dominance of the ‘Dead Puck Era.’ 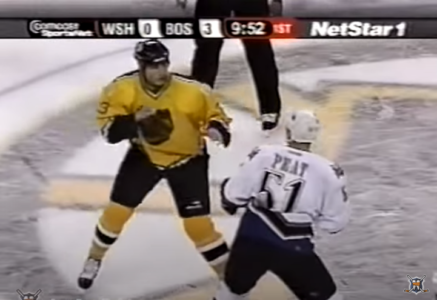 Getting the shoulder tap from the Coach means only one thing in hockey: go out there and do your job. Stephen Peat got the tap after the Bruins popped in 3 quick goals in the first 10 minutes in Boston. Oliwa knew what was coming when Peat hopped over the boards and the two started their dance at center ice. Peat equalled the “Polish Hammer” in weight, but gave up 3 inches in height. He knew he needed to get inside if he wanted to inflict any damage. The Capitals enforcer started the bout off strong with a flurry of rabbit punches to the back of Oliwa’s head. But as soon Oliwa got his right hand loose he landed a quick jab and then a banger of a right hand that immediately gashed and stunned the former Red Deer Rebel. Fans should understand that Peat held on for dear life after that straight right because one more of those connecting would’ve mean he’d be TKO’ed. The two wrestled and jostled for a bit before the linesmen seized the opportunity to end the 1st period battle. Peat went out there and did his job against a much stronger and taller opponent, and rallied his team to tie it up late in the third on a beauty by Peter Bondra. But it was all-for-not as the Bruins snagged the overtime winner to give Bruins fans even more reason to party that Saturday night. It must be noted that Stephen Peat was an absolute warrior throughout his career and fought whenever he was called upon. Unfortunately, his struggles with addiction and chronic injuries has left the former enforcer homeless and unable to live a productive life. Our thoughts and prayers are with Peat and his family, and hope he is able to overcome these difficult times. 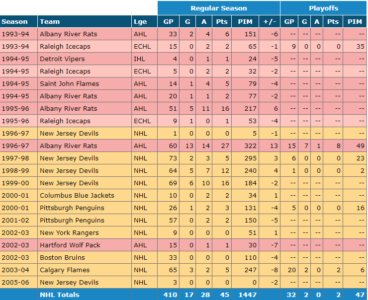 “The Polish Hammer” may be one of the best nicknames in sports history, but it wasn’t earned without consequences. In North America, the Tychy native is generally remembered for his Stanley Cup victory, intimidating presence on the ice, and (for those that know) obsession with astronomy and computer programming. But Europeans became familiar with his domestic abuse charge in Poland, the allegations of fighting members of the Poland National team and his eventual dismissal from his coaching position due to numerous complaints from players. The transition from enforcer-to-citizen is difficult. There are those that have made the transition seamlessly, and those who have encountered insurmountable obstacles as a result. We can only hope that Oliwa is able to overcome and atone for his mistakes because fight fans know that he always left it all on-the-ice and teammates always appreciated his sacrifices.