‘The Enforcer Advent Calendar’ was never meant to be a ranking system. BUT… it just wouldn’t feel right to not have the G.O.A.T. sitting at the top. Honourable mentions should be given to Chris Nilan, Gino Odjick, Jay Miller, Gord Donnelly, Dale Hunter, Chris Neil and Terry O’Reilly. In only 31 days, it’s damn near impossible to give credit to every warrior that’s stepped on-the-ice over a century of professional hockey. Every gladiator that’s ever dropped-the-gloves should be given the respect and credit they deserve so whether they appeared this month, or we have to wait until next December, they all deserve to be mentioned when we clink our glasses this New Year’s Eve. So let’s all raise our glasses and say, ‘Cheers to all enforcers. May the best day of their past, be the worst day of their future.” 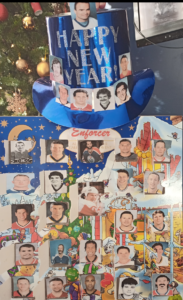 Michael Jordan, Wayne Gretzky, Diego Maradona and Muhammad Ali are all considered the greatest of all time in their respective sports. While the media loves to constantly debate these rankings, if you go into any bar and talk about enforcers, you may hear several names mentioned, but you will ALWAYS hear someone bring up Bob Probert. Probey was truly something special and struck fear into the hearts of the opposition with his complete disregard for his own well-being. Stu Grimson described Probert’s fighting style as impossible to beat because he never worried about taking damage and he always knew he would be able to inflict more pain than his opponent ever could. While guys undoubtedly landed punches on Probey, they always knew they were going to get smashed with 4 bigger ones in return. Combined with his 6’3”, 225lbs frame and a strong fighting IQ, the former Wings draft pick’s fearlessness built him to become the greatest enforcer of all time. Don’t take my word for it though – let’s ask 1 of the 127 guys that Probert squared up with. Or maybe Grimson who fought Probert 13 times, Tie Domi who fought him 9 times, Donald Brashear who fought him 8 times…and the list goes on. Probey never discriminated when picking his dance partners, and fight-fans that were lucky enough to watch him fight live knew they were watching the G.E.O.A.T. And man, do we ever miss him. 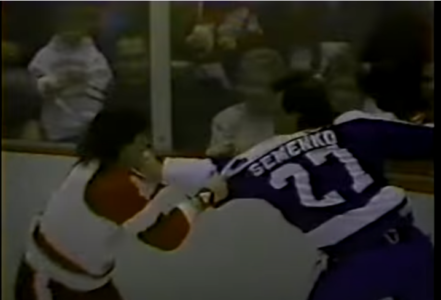 The problem with G.O.A.T. conversations are that it’s tough to compare players that never faced each off against one another. Fortunately for fight-fans, there are no hypotheticals needed in comparing ‘Cementhead’ Semenko and Probey, because we got to see them go toe-to-toe that Friday night in Michigan. It should be noted that Semenko was clearly on the decline and whether he was debating retirement or not before this bout, getting beat down by a young up-and-comer certainly made the decision a little easier. This was by far Probert’s best season. 398 penalty minutes, 62 points and he was named to the All-Star game alongside the likes of Wayne Gretzky and Mario Lemieux. But the highlight must have been destroying an enforcer that intimidated the opposition for over a decade. Considering that the ‘old man’ got the best of Probert a month earlier, the Wings enforcer wasted no time in exacting his revenge by dropping-the-gloves less than 2 minutes into the game. The two gladiators started the bout by trading a couple right-hands each and just as he had done to countless other challengers, it looked as if Semenko was going to be able to hold back the young stallion. But Probert wasn’t your regular enforcer, he was the G.O.A.T. and proved it at the 30 second mark of this scrap. Probey was known for getting stronger as the fight went on, and with Semenko visibly gassed, Probert landed a big left-hook, followed up 3 vicious uppercuts that dropped Wayne Gretzky’s former bodyguard. This bout officially marked the changing of the guard. Semenko was the past and Probert was the future.

The Magic 8-ball was all the rage in the early 90s’, and maybe Chris Chelios had given his a shake the night before and asked ‘will Stu Grimson win a fight against Probert tomorrow night?’ The answer – ‘Outlook is not so good.’ Maybe that’s why he did his darndest to keep the two gladiators apart on that chilly night in Detroit, but after Grimson’s cross-check to Probert’s face, Magic 8-ball or not, these two were going to throw down. The two squared up and Grimson had his chance to rock Probert when the Wings enforcer leaned forward to grab his jersey, but the enforcer-turned-lawyer just missed his big right hook. This put the ‘Grim Reaper’ on his heels and when you gave Probert a sliver of light he took full-advantage. Probey landed two big right hands that knocked the Hawks’ big man’s helmet off and then fired off a flurry of right-hands. Credit to Grimson for trying to stand-and-trade with Probert, but the Windsor native packed such power in every punch that when he landed 3 big right bombs, Grimson’s tumble to the ice was inevitable.  Maybe it was the frustration of his team being down 3-0, or the fact that Grimson had been beaten by Probert in their last 3 bouts, either way, Chris Chelios and his Magic 8-ball clearly knew what the end result was going to be. It’s just too bad nobody told Grimson before he drove to Joe Louis Area that Tuesday night, his face and pride would have appreciated a heads-up. 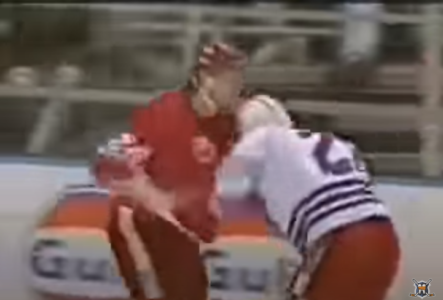 There is a special kind of respect amongst hockey enforcers, but respect aside, Probert and Domi clearly didn’t like each other. When describing their first scrap Probert laughed and said that Domi said to him ‘Give me a shot at the title, Macho Man wants a shot at the title!’ Probert knew he didn’t need to fight him but he said “Alright, come here then you little f*cker!” The first fight was fairly even, but after Domi cut Probert, it looked as if he came out the victor. And Domi didn’t waste any time letting everyone know it. Domi’s famed ‘title-belt’ celebration, combined with his countless sound bites to the press set the stage for a high-publicized round 2. The front page of the New York Times wasn’t showing Wings vs Rangers, it was Probert vs Domi. The rematch came on December 02 in Madison Square Garden, and Probert made sure the ‘Macho Man’ wasn’t doing any celebrating at the end of this bout. The two lined up on the opening face-off and Probert tried to initiate the scrap immediately, but Domi wanted to wait until ‘he was ready.’ Well, negotiations went out the door when Probert grabbed Domi and said ‘No you little f*cker, let’s do this now.” The rest is history. As Domi pressed forward to get inside position, Probey just calmly skated backwards and fed the bald enforcer 5 straight right jabs. Domi tried his best to answer back with his signature over hand bombs, but all he could manage to hit was Probert’s shoulder pads. When asked about this battle, Domi said that Probert’s eyes were lit up like two huge light bulbs as he came forward with just a flurry of right hands. The turning point came at the 50 second mark when Domi was clearly tiring out, and Probert landed two massive right hooks that sent the Rangers tough guy cowering to the ice. The Wings’ legend joked that he saw the ‘Macho Man’ laying on the training table with ice-packs on his head during the 1st intermission, while he didn’t have a single mark on him. Domi was always a showman and should be applauded for bringing some much needed character to the hockey world. But when Domi was skating to the penalty box, Steve Yzerman made sure to remind him that the championship belt still belonged to #24 of the red and white. 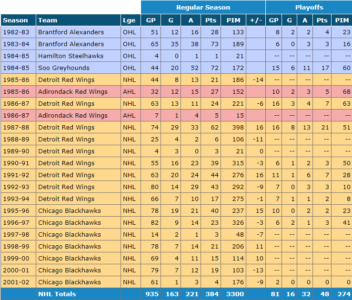 The trials and tribulations of Bob Probert have been well-documented both during his playing career and after. The Windsor native was not without his faults. It’s easy for fans to sit in their armchairs and criticize players for their decisions and indiscretions – Probert would be the first to admit his mistakes. In a heart-breaking letter, ‘Dear Disease’ he outlined all of the events, memories and moments that the disease of drugs & alcohol stole from him. On July 5, 2010, Bob Probert tragically passed away from a heart attack while boating with his family on Lake St. Clair. Not only did the hockey world lose their G.O.A.T. enforcer, they lost a talented player, an incredible teammate, and – from all accounts – a man with a larger-than-life presence. Probert used to buy tickets for underprivileged kids in Detroit to come out to the games. He never said a word about it to anyone. As Steve Yzerman said, “he was a rugged hockey player and an unselfish teammate who was willing to do anything for his team, and most notably, he had a kind heart and a gentle soul.” Although Probert is renowned as an enforcer within the hockey community, his impact clearly extended far beyond dropping the gloves.