We are down to The Three Amigos. I think it’s time we blame December for only having 31 days, because there are so many enforcers that deserve their spot on this prestigious ‘Enforcer Advent Calendar.’ Wade Belak, Chris Nilan, Rick Rypien, Jay Miller, Terry O’Reilly, and even our modern-day gladiators, Tom Wilson and Zack Kassian are all calendar worthy. Whether it’s because they played for your favourite team, beat a guy you didn’t like or you just liked their style, we all have our biases towards certain enforcers. But limited spots mean some worthy names get left off. The lucky thing for us is we don’t need an advent calendar to celebrate our favourite enforcers, all you need to do is bring them up to a couple buddies and the stories are sure to flow. 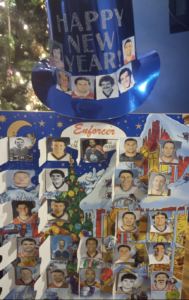 Regardless of the omissions, Paul “Biznasty” Bissonnette is well deserving of his spot on the calendar for his contributions to hockey both on- and off- the-ice. The Ontario native has carved out a unique niche in the hockey world with his co-hosting role on the Spittin’ Chiclets podcast and has cultivated a fanbase whose loyalty mimics that of an NHL team. To make the story even better, he now calls both Arizona and Vancouver his home, so the former enforcer never has to fight or experience bad weather ever again! The former Penguins draft pick played 6 seasons in the NHL and, while he only tallied 340 penalty minutes, ‘Biznasty’ battled some legit heavyweights including Colton Orr, Brian McGratton and Jody Shelley. Bissonnette was a Twitter legend before his career ended (shoutout to Scotty Upshaw for getting him signed up) but it absolutely exploded when he hung up the skates. While no enforcer is the same, you’d be hard-pressed to find a phony amongst the ranks. Giving hockey fans an honest lens into the sport when we are so used to being distracted by media-designed illusions, Biz’s authenticity is a breath of fresh air. Whether it’s awkward sex stories or getting pigeon-tossed by Anthony Kiedis, Biz is committed to giving the hockey world a regular-dude’s perspective. 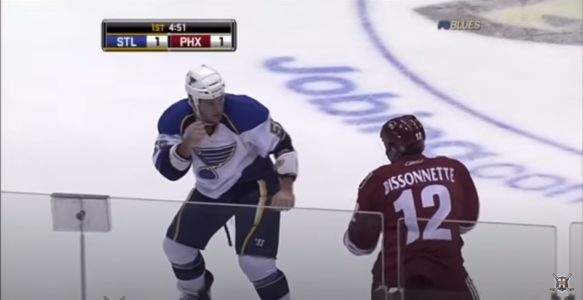 There’s nothing better than two heavyweights playing a game of truth-or-dare: staring each other down and just taunting their opponent to take the first strike. Well, Biz didn’t pick truth, and landed a huge left jab to start the dance. All the credit in the world to the audio team in Arizona because you can literally hear the skate blades carving and a massive thump when Biz punched Janssen against the boards. It looked like the battle was over when Arizona’s big man landed 2 body shots and a big right hook, but Janssen must run marathons, because his endurance never waivered. Both enforcers went on to trade a few right-hands and jersey-jabs, until Janseen had the awareness to waive off the linesmen at about the 43 second mark. Love the courage, but that was a big mistake. After Janssen pleaded to keep the battle going, Biz landed a vicious uppercut and a huge right hand. While the Blues enforcer responded back with a couple punches, this bout was all Biznasty. The ‘Yotes locked up a 5-3 win and, while it may have been largely due to Ray Whitney’s 4-point night, Biz laying the smackdown on Janssen sure as hell didn’t hurt the cause.

It seemed fitting that on the day Thor: The Dark World was released, Biznasty laid the hammer down on a Flyer with a tendency for dirty hits. Zac Rinaldo may be a fan-favourite in Philly, but elsewhere he holds a less than desirable reputation. While Bissonnette would have loved for his assist to be his only addition to the box score, when Rinaldo ran his teammate Tim Kennedy against the boards, he had no problem adding a fighting major to the game-record. Rinaldo knew what was coming and the two wasted no time throwing some haymakers. Biz landed two big rights that sent Rinaldo to the ice and, with the linesmen were nowhere to be found, the former London Knight got back to his feet and threw some overhand rights that barely grazed the ‘Yotes enforcer. The fight ended with Biz putting the Flyers tough guy in a headlock and wrestling him to the ice, as well as with the announcers letting the world know that Biznasty ranked second (only behind Alexander Ovechkin) for most Twitter followers in the NHL. You’re welcome for a cool bit of trivia that’s good enough to stump friends and family, and even get on the board during Jeopardy. Biznasty has and always will be full of surprises

You know you’ve done your job when a 21-year veteran emphatically pats you on the back after a scrap in the 2nd period. Shane Doan was pumped for Biz after this tilt and so were the fans at the Jobing.com Arena. The two got talking at the faceoff – bless Dave Tippett’s heart for giving Jay Rosehill the go-ahead because the fans got to see two warriors absolutely chuck ’em. Rosehill got the party started with a flurry of left-hands, while the future-podcaster patiently waited to throw a massive left bomb. After taking a series of jersey-jabs, Biz earned his nickname with a nasty left hook. The two broke apart for a second and, with the linesmen nowhere to be found again, both warriors shook off their elbow pads and traded some right-handed bangers in front of the ‘Yotes bench. While the battle was definitely worth the price of admission, in hindsight it may have jump-started the Flyers more than the Coyotes. After the bout, the Flyers rattled off 4 straight goals, leaving the desert with a 5-3 victory. Whether the scrap was the catalyst or not is debatable but, for fight fans, seeing two guys trade punches to start off 2014 was the real reason it was a good night in Glendale, Arizona. 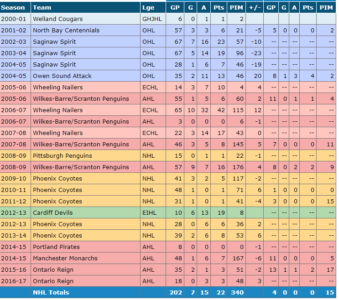 There are countless people who think they could hop on the radio, record a podcast or do play-by-play. But the fact-of-the-matter is they may think it’s easy – but it’s not. Biznasty was able to make the jump because of his charisma, honesty and – more importantly – work-ethic. The amount of filming, interviewing and research Biz does to produce quality, honest content will never get acknowledgement it deserves because – let’s be real – the people care about the end product and forget to consider work it took to get it there. Luckily for hockey fans, Bissonnette isn’t in it for the credit – you can tell he is genuinely enjoying life after the league and knows he is delivering quality product to a rabid fanbase. The Spittin Chiclets pod may not be everyone’s cup of tea, but it gives fans a break from the statistical breakdown and offers unfiltered insight from former players. Think about it: there are guys that played for a decade more than Biz in the league who can’t hold a candle to his continued impact on the hockey world. Whether it’s in the NHL, minor, or beer leagues, you’d be hard-pressed to walk into a dressing room that wasn’t playing Biz on a Bluetooth speaker telling a hilarious story on the podcast. Pretty good for a ‘Sandbagger’ from Ontario.