The Final Four. As we approach the end it feels necessary to highlight a disclaimer – this is NOT a ranking system. The ‘Enforcer Advent Calendar’ is meant offer a surprise unveiling of some of your favourite, forgotten and unknown enforcers. Nobody ranks the bell above the tree or the wreath. Advent Calendars are simply a reason to eat chocolate, laugh and think about something you may not have otherwise thought of. Please enjoy this Final Four because, regardless of whether your favourite enforcer makes an appearance, all these men dedicated themselves 100% to their craft and we were lucky enough to reap the benefits. Luckily, we don’t need Rare Earth to celebrate these warriors. We just need the 2020 ‘Enforcer Advent Calendar.’ 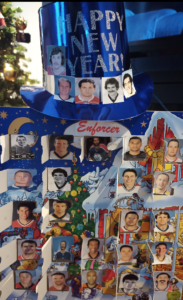 Baby. I’m wrong, but it’s lonely in the penalty box.

I know I broke the rules, but rules are broken by fools.

There’s no doubt that Dave Schultz wrote his Penalty Box masterpiece while, spoiler alert…in the penalty box. During the 1974-75 season, the former member of the ‘Broad Street Bullies’ set the season-high record for penalty minutes with 472. The Flyers enforcer clearly utilized his time of reflection to be creative and recorded his double-sided “Penalty Box” album in 1975. Regardless of his musical endeavours, Schultz was dedicated to his enforcer role and took pride in being one of the toughest guys to ever lace ‘em up. Whether it was fighting the Bruins’ ‘Lunch Pail Gang’, scoring the series-clinching goal against the Atlanta Flames or fighting the New York Islanders fans in the Nassau Coliseum, Schultz never gave less than 100%. It’s safe to say that if the opposition had its way, they wouldn’t just keep him in the penalty box – they’d lock him up and throw away the key. 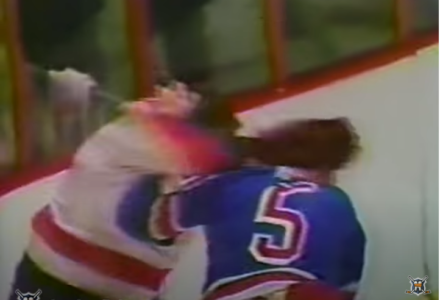 After years of terrorizing both the Rangers and Islanders, it’s safe to say that Dave Schultz doesn’t take many vacations to New York. The former member of the famed ‘Broad Street Bullies’ left his mark on the Big Apple by delivering huge hits and imposing himself on the opposition with his willingness to fight anyone who wanted it and many who didn’t. While many of his bouts weren’t stand-and-trade bouts, he was always a menace to the opposition and helped the ‘City of Brotherly Love’ win with anything but love. The former Swift Current Bronco targeted Dale Rolfe in the 1st period of their Game 7 series with the Rangers. Unfortunate for Rolfe, when Schultz was locked in, he rarely missed. In this bout, the two mixed it up after a little scuffle in front of the Rangers net. The Flyers big man started the scrap with a mixture of hooks and uppercuts that landed clean to Rolfe’s chin. The Rangers defenceman showcased his toughness by staying on his feet despite being on the receiving end of 5 clean punches. To add insult to injury, Schultz can be seen grabbing Rolfe’s hair and pulling his head back so he could land 2 more clean right jabs before the linesmen were able to intervene. Even when the linesmen desperately tried to hold him down, Schultz never stopped fighting and, while the zebras held both enforcers back, the Saskatchewan native ended this bout with a clean right jab. This was Game 7 of the Stanley Cup semi-finals and I wouldn’t have expected anything less from the man they called ‘The Hammer.’

This scrap in Long Island was Number 8 vs Number 8…or was it? It started like that, but the rowdy Islanders fans refused to be left out of the action and tried their darndest to get a piece of Schultz. ‘Schultz is a bum’ signs and “Schultz you suck” chants filled the Nassau Coliseum during the Islanders 1975 playoff series with the Flyers. The Flyers big man was not a popular man in New York and, with their team down 3-0 in the series, passionate Islanders fans were willing to do anything to extend the exciting playoff series. They seized that opportunity when Dave Schultz and Garry Howatt dropped the gloves mid-way through the second and started trading right hands against the glass. At about the 30 second mark, you can see a fan reach over and hold Schultz’s jersey in hopes of aiding their Isles’ enforcer. It was a bold move and it didn’t pay off. Schultz fed the former Flin Flon Bomber a series of body-shots and right hooks, which only further enraged the rowdy crowd in Long Island. In a non-orthodox fashion, Schultz ended the bout by pinning Howatt against the glass and body-slamming his 185 lbs body against the much smaller enforcer. That’s when all hell broke loose. Fans started throwing hands over the glass until Schultz’s teammate, Ted Harris gave two right jabs to an overzealous fan. The linesmen tried to put Schultz into the penalty box, but the barrage of fans were livid and the Flyers enforcer was their target. The chaos was too much and the linesmen had no option but to take Schultz to the tunnel to serve his penalties. The Nassau Coliseum was so hostile that they launched a beer at Schultz, which – of course – struck the linesmen. Protecting the players with a tarp overtop of the tunnel is now seen in every NHL arena, but it wasn’t until Schultz’s run-ins with the Islanders crowd that it became mandatory. The Islanders would rally back from a 3-0 deficit, only to fall short in Game 7 against the notorious ‘Broad Street Bullies.’

Although ‘The Hammer’ danced with ‘Taz’ 4 times during their careers, their playoff tango will always be the most memorable. ‘The Broad Street Bullies’ were tired of ‘The Big Bad Bruins’ pushing them around, hence why Schultz seized the opportunity to set the tone early in Game 2 of the Stanley Cup Finals. Schultz may have wanted Savard, but he ended up with Terry O’Reilly. The two grappled for a bit, until Schultz landed two huge right jabs to the Bruins enforcer’s chin. When Taz tried to respond with a couple lefts, the Flyers big man tossed one more right jab that sent the Bruins tough guy to the ice. After his career ended, The Hammer joked that he didn’t sustain much damage in fights with O’Reilly because the Bruins enforcer never had the best balance. This bout showed that it might be best best to take a tumble to the ice when you’re losing because, had he stayed on his feet, O’Reilly would have been in for a world-of-hurt. Video footage also shows Bobby Clarke’s OT winner in an important Game 2 that let Philly leaving the Boston Garden tied at 1-1. This was one of the most physical Stanley Cup Finals to-date and marked the first time Flyers fans watched their team hoist The Cup. 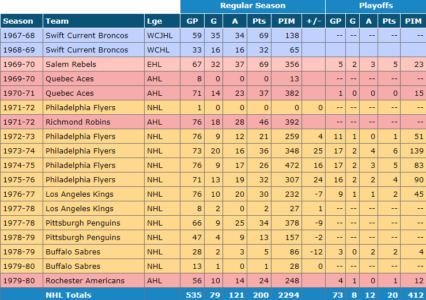 Dave Schultz may not have been born to be an enforcer, but his grit and toughness made it his destiny. However, during the 1973-74 season that saw the Flyers win their first Stanley Cup, the Saskatchewan native tallied a career high of 20 goals, including a series-clinching goal against the Atlanta Flames in the first round. In fact, his unwillingness to fight in the 1975-76 season forced General Manager Keith Allen to trade him to Los Angeles. In classic Hammer fashion, he proved his unwavering willingness to fight to his former GM by battling his enforcer replacement, Paul Holmgren, the first chance he got. Although ‘The Broad Street Bullies’ weren’t very popular outside of Pennsylvania, they remain legends in the Quaker State to this day. Relaxing was never an option for Schultz during his playing days, a mentality that he maintains at 71. The Saskatchewan native recorded an album, co-wrote a book and was even a referee in the famed WCW Slamboree in 1994. Now at 71, he is an energy salesman, owns a limousine company and is currently writing a movie script. Oh, and he’s also doing stand-up comedy on the side. The Hammer maintains that he’s never fought a single time off-the-ice and who wouldn’t believe him? He clearly doesn’t have time to fight – he’s too damn busy.