The Final Five. As we approach the end it feels necessary to highlight a disclaimer – this is NOT a ranking system. The ‘Enforcer Advent Calendar’ is meant offer a surprise unveiling of some of your favourite, forgotten and unknown enforcers. Nobody ranks the bell above the tree or the wreath. Advent Calendars are simply a reason to eat chocolate, laugh and think about something you may not have otherwise thought of. Please enjoy this Final Five because, regardless of whether your favourite enforcer makes an appearance, all these men dedicated themselves 100% to their craft and we were lucky enough to reap the benefits. Luckily, we don’t need Rare Earth to celebrate these warriors. We just need the 2020 ‘Enforcer Advent Calendar.’ 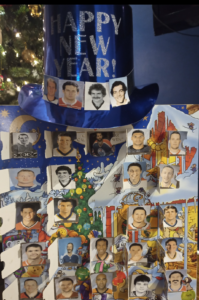 Eldrick “Tiger” Woods may be the most famous Tiger, but David “Tiger” Williams was the first. The former Leafs enforcer played 16 seasons in the NHL during the heyday of ‘old time hockey,’ which meant fighting wasn’t optional, it was mandatory.  While the Saskatchewan native played in his home country for 10 seasons before making the move down south, he will always be remembered as a proud member of ‘The Buds.’ In fact, with 3971, Williams still holds the record for all-time penalty minutes. He tallied these minutes after playing 445 fewer games than Dale Hunter, who achieved a mere 3565. Yes, take that all in, because nobody will ever knock the original Tiger off that pedestal. Tiger was not only one of the toughest enforcers to don an NHL jersey, he was also one of the original showmen. In soccer, there is an unwritten rule not to celebrate against your former club, but this ain’t soccer folks. Tiger proved just that, when he scored a beauty against his former Toronto club and proceeded to do one of the best celebrations of ALL-TIME.

Tiger was always a ferocious fella, but his intensity was certainly augmented during this playoff bout. Although it was a bit late, the cameraman likely saved his job when he captured the battle between Tiger Williams and Dave Lewis about half-way through. At this point, Williams had been stripped of his jersey and, with a flurry of vicious uppercuts, was looking to punish the man who took it off. Game 4s are quite often the turning point of an NHL series, and Tiger Williams clearly used that as his motivation to lay a beat down on Dave Lewis. Lewis assumed that his 2-inch reach advantage would keep Tiger at bay, but we all know why they say never assume… On that Sunday night in the Maple Leafs Garden, Lewis got a harsh reminder of his poor assumption. Williams was able to feed Lewis a series of uppercuts that left the linesmen no option but to jump-in and end the one-sided affair. But Williams didn’t want the battle to end and even with the black & white stripes between them, he did his darndest to grab a hold of the Islanders big man. Williams won this battle and the Leafs went on to win the crucial Game 4, which catapulted them to a huge Game 7 series win. The team likely would have cruised to their 14th Stanley Cup if they hadn’t run into a dominant Ken Dryden led Montreal Canadiens. But this was the NHL, and close is only good in horseshoes and grenades.

Playoff scraps were more common in the 70s than they are now, hence why Tiger Williams was able to fight in nearly every game of the contentious Leafs-Islanders series. After the beating his teammate Dave Lewis took a few days earlier, it was certainly surprising to see Garry Howatt so willing to jump in the cage with Tiger. But as hockey fans know, you fight first, ask questions later. In this battle, Howatt was able to land a few uppercuts while the linesmen held Williams down. Tiger was livid that he wasn’t able to get his hands on Howatt. After landing only sucker punches, the Alberta native stoked the fire by jawing at Williams… definitely a bold move by Howatt to taunt the Tiger. The two would end up dancing 4 times in their career, but it was Williams who had the last laugh on that Thursday night in Toronto. The Leafs locked up a 5-2 victory and notched back-to-back wins to send the Islanders back to Long Island. This may not be a staple on Rock em’ Sock em’ tapes, but this series was filled with bench-clearing brawls, countless fights and was an absolute thriller for hockey fans. 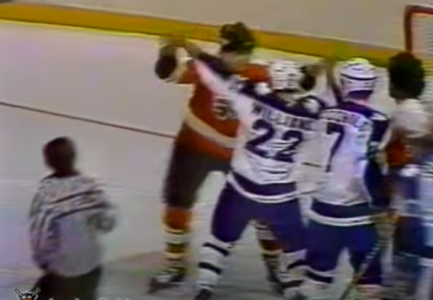 You don’t become the league’s all-time penalty minutes leader by accident. It’s done purposefully and intentionally. So, when Williams grabbed Behn Wilson, his intentions were clear: give his team a jump start by laying a beating on the Philadelphia Flyers tough guy. The mission was accomplished… with a little help from the linesmen. With 2 huge uppercuts and 3 big right hooks, the battle between Wilson and Williams started off all-Tiger. Despite the slow start, Wilson was able to withstand the onslaught and muster up a counter-attack of 2 massive overhand rights directly to the Tiger’s chin. With a jaw made of more concrete than glass, Williams was able to lock up the Flyers’ big man until the linesmen jumped in. In the wild, a tiger must be opportunistic and capitalize on its prey because it never knows when its next meal will come around. Well, they didn’t call him Tiger for nothing. Williams punished his prey when both Don Koharski and Matt Pavelich tied Wilson’s arms up. Tiger pounced on Wilson with 3 massive left uppercuts as the former Ottawa 67s was left defenseless. Were they cheap shots? Maybe, but all’s fair in love and war and there was certainly no love lost between these two rivals.

The enforcers of the 70s and 80s share a lot in common. They were all part of more than 1 bench-clearing brawl, they were usually the instigator and they often fought more than once in a game. Other than his badass nickname, what separated Tiger from the rest was his ability to find the back of the net. In 15 seasons in the league, Williams netted 10+ goals in every season except 4 of them, which was largely due to injury. This included a career high of 35 goals in the 1980-81 season for the Vancouver Canucks. Williams may be remembered most for holding the penalty minutes record, his unique celebration or his vicious stick work on Dennis Owchar in 1977; however, Tiger was a hockey player first, and an enforcer second. It just so happened he was able to do the latter much better than anyone else in the NHL, so it became his assumed identity. Tiger Williams will always be underrated within the general public. The Canadian punk rock band ‘The Hanson Brothers’ felt so passionate about this disrespect that in 1996 they launched a campaign to get Tiger into the Hockey Hall of Fame. Although the campaign fell short and the former Swift Current Bronco was never inducted in the HHOF, he would undoubtedly be a first ballot entry into the much-needed Enforcer Hall of Fame and is a deserving member of the ‘Enforcer Advent Calendar.’