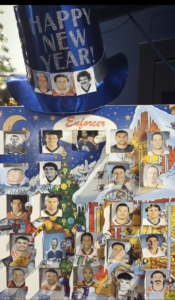 John Wensink epitomized 70s hockey: big afro, huge moustache, no helmet and an unbridled desire to jump into a bench-clearing brawl. The Ontario native was drafted by the St. Louis Blues, but will always be remembered as a Boston Bruin. More specifically, as a proud member of ‘The Lunch Pail Gang’ that included another ‘Enforcer Advent Calendar’ member – Stan Jonathan. The Bruins of the late 70s didn’t hide their identity, they jammed it down their opponent’s throats, because they never had any intention of playing pretty. ‘Lunchpail workers’ get their hands dirty, aren’t afraid of confrontation and work their asses off every day. Embodying that mindset, John ‘Moose’ Wensink absolutely dominated during the 1977-78 season. Moose recorded 20 goals, 181 penalty minutes and was a catalyst in the Bruins Stanley Cup run that fell short against the Montreal Canadiens. The former Cornwall Royal knew his role with the Black and Gold and never blinked when Coach Don Cherry tapped him on the shoulder and said, “Moose, go for a skate.”

16 years prior to the UFC being created, John Wensink utilized the ‘ground and pound’ technique on Minnesota’s enforcer, Alex Pirus. For several reasons, this is the tilt that will never be forgotten. Although all-out brawls may have been commonplace during the 70s, you never got to see a no-name player challenge the other team’s big man and absolutely dominate him. But that’s not what fans will remember from this fight. Fans will never forget when Wensink skated over to the Minnesota bench and gave them a taunting that is still etched in their brain. The way Welsink stood with so much swagger and arrogance in front of the fuming North Stars bench was like a scene out of Slapshot. Wensink was willing to fight anyone and anything they sent out. Only problem? They didn’t send anyone, they just took it. The Boston Garden erupted at their enforcer belittling the North Stars bench and loved that he didn’t stop his trash talking until he skated off the ice. In the bout with Pirus, the two traded a few shots each and the damage came when Pirus was down on-the-ice and Moose fed him two huge right hands that left the North Stars’ big man bleeding.  Wensink was tough as nails and didn’t fear anyone…except his wife. The next night a reporter asked him about the fight and he responded “You think that was something? I had a bigger one with my wife when I got home, and I lost.” The Moose always knew how to give the fans at the Garden show. 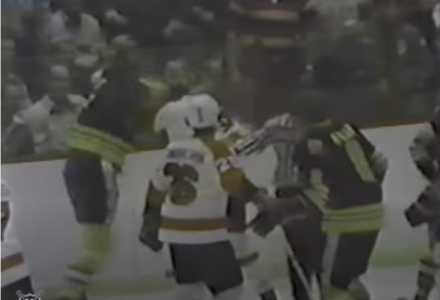 The Philadelphia and Boston rivalry transcends all-sports. These two cities have never hid their distain for one another but, in the hockey rivalry, they had the option to drop-the-gloves at any given moment. And what better time than during Game 4 of the Stanley Cup semi-finals. In this tilt, the two heavyweights started trading shots at the blue line. While, Wensink was able to drop Bladon early, the former Edmonton Oil King was able to get back on his feet. At about the 35 second mark, Wensink landed back-to-back uppercuts before tossing Bladon to-the-ice. This fight set the tone for a dominant Bruins performance that left the fans at The Spectrum stunned as they watched their Flyers lose Game 4. The Bruins wrapped the series up in Boston and sent their rivals golfing. This was Wensink’s career year and while it wasn’t enough to win the Cup, Moose let the league know he was a dual threat with his ability to light-the-lamp and knock-your-lights-out. 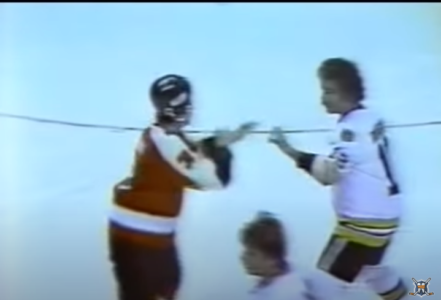 We’ve all had that ‘deer in the headlights’ feeling in life. It sucks when you just freeze up, but it’s a whole lot worse when you’re freezing up in front of a furious John Wensink. Behn Wilson had that same look when he squared off with Moose that Saturday night in Boston. Wensink, on the other hand, had a little smirk on his face when he saw Wilson ready to dance. The Bruins enforcer started the tango with a quick left jab directly to Wilson’s nose and followed it up with a vicious 2-punch combo. Wilson was able to withstand the flurry and locked Wensink’s arms in an effort to compose himself, and surprisingly, it worked. The Flyers big man was able to land a good right hand to Wensink’s chin but he was no match for the Ontario native. Wensink landed two big left hands before tossing Wilson to the ice. The Flyers were looking to erase the embarrassment they suffered at the hands of the Bruins in last year’s playoffs and, while they lost this battle, they won the war with a 7-3 victory in their rivals’ barn. 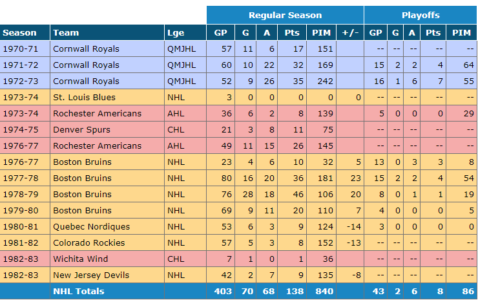 John Wensink will be the first to express his regret about acting the way he did against Minnesota… but those were the times. Due to the court-ordered desegregation law, Boston was in turmoil, bussing 18,000 students to schools outside of their neighbourhoods. The town needed something to bring them together and rally behind. Wensink was that shining light that night against Minnesota. Whether Slapshot modelled ‘The Hanson Brothers’ after Wensink is unknown, but there’s no doubt he snuck into the writer’s psyche with his performance that December evening. Moose now owns a home renovation company, plays senior hockey and lives a modest life in Missouri. While Wensink only played 4 seasons in Boston, he gave Bruins’ fans hope when they needed it most. As we get older, reflection and change are inevitable, but thankfully, Moose is still rocking that beauty above his lip.