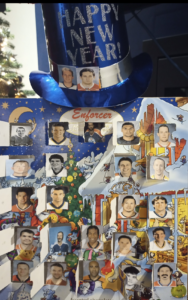 They called him Butzemann, Bokkenrijders, Baba Yaga or, in English – ‘The Boogeyman.’ Derek Boogaard was larger than life and intimidated his opposition with his massive 6’7” and 258 lbs frame. In only 6 NHL seasons, the former Minnesota Wild draft pick racked up over 50 fights and 589 penalty minutes. While Boogaard’s tragic death has entrenched him in infamy, we have to acknowledge his greatness on-the-ice. Fellow enforcers have ranked Boogaard as the most intimidating presence they’ve ever faced. Georges Laraque added to the legend by stating that facing Boogaard led him to retire – “I knew sooner or later he would get the better of me, and I just like my face, and I just didn’t want to have it broken.” The Boogeyman’s path to the NHL was far from conventional, but it rarely is for enforcers. In a Junior A game for the Melfort Mustangs, Boogaard lost his temper over an unspecified incident and jumped into the opposition’s bench and threw punches at anyone he could get his hands on. ‘The Boogeyman’ got ejected and went up in the stands to sit with his dad to watch the rest of the game. That’s when he was approached by a scout who loved his intensity and offered him a spot on the Regina Pats. The journey that ensued was tumultuous and the hockey world will never forget ‘The Boogeyman.’ 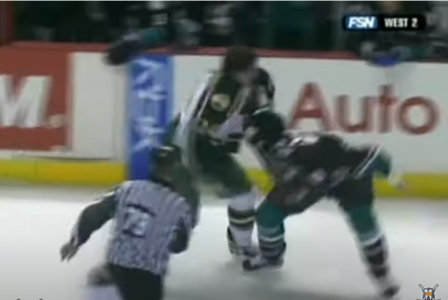 After this first meeting with Derek Boogaard, it took Trevor Gillies 5 years to muster up the courage to take him on again. It wasn’t a myth or a folktale, Gillies clearly saw ‘The Boogeyman’ that Sunday night in Anaheim. Trevor Gillies was a big boy, but he still gave up 4-inches and 20 lbs to Boogaard. The Boogey Man landed a big right to start the bout, but Gillies clapped back with a good left hand that knocked off Boogaard’s helmet. The two grappled and traded a few shots, while Gillies fought desperately to keep his balance. While doing so, his head dipped down and Boogaard landed a quick uppercut. Somehow the former Oshawa General was able to survive that shot and fired back a couple quick right hands. Then it happened… Gillies looked to try and push the Wild enforcer against the boards and BANG! Boogaard landed a vicious uppercut that NOBODY could have withstood. Gillies went down and The Boogeyman skated nonchalantly to the penalty box. To add insult to injury, Gillies was issued an instigator penalty. That was a surprise, because no one wished for The Boogeyman, he just always appeared.

On the same night that Kobe Bryant scored 81 points in Toronto, Jim Vandermeer must have felt like he absorbed 81 punches from The Boogeyman. Vandermeer tried to get the jump on Boogaard by giving the Wild’s enforcer a cross-check to the face. It didn’t work. Boogaard was one of the first enforcers to really utilize body shots and gave Vandermeer two huge rights to the gut that must have winded the Hawks defenceman. Vandermeer was only able to land a handful of jersey jabs, while Boogaard was landing right hook after right hook. After two quick uppercuts, Vandermeer looked clearly dazed when The Boogeyman landed a thunderous right jab to end the bout. Unlike Trevor Gillies, Jim Vandermeer never dropped-the-gloves with Boogaard again… and who could blame him. The Boogeyman’s strength was unmatched during his tenure in the NHL, but it was his fighting technique that separated him from the rest. Body blows, jersey jabs, switching hands, and his signature uppercut gave him an arsenal that made Boogaard incomparable to other enforcers. He was truly something special. 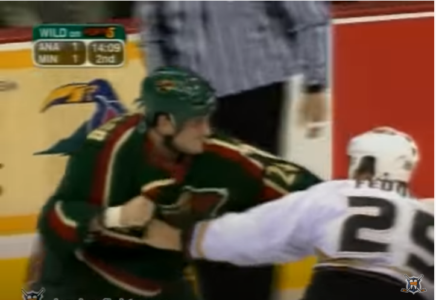 During Boogaard’s tenure in Minnesota, Friday nights were just different. The Friday night in 06’ was special because Boogaard tried his darnedest to save Fedoruk pain and embarrassment by ignoring his advances. But Fedoruk was extremely persistent. Once Boogaard finally obliged, the Ducks tough guy was in for a world of hurt. Fedoruk was only able to land one shot before The Boogeyman picked him apart with two lightning fast jabs and a sneaky left-handed jersey jab. For some reason Fedoruk tried to throw an elbow that only left the former Kelowna Rocket vulnerable to Boogaard’s massive power. That’s when Boogaard landed a brutal right jab that forced Fedoruk to the dressing room for repairs. Turns out that jab sent Fedoruk into surgery with a fractured cheekbone. This injury was likely the reason George Parros was brought to Anaheim the following month. The atmosphere that Friday night was electric and the crowd at the Xcel Energy Center erupted when Boogaard raised his fist in triumph as he skated to the penalty box. 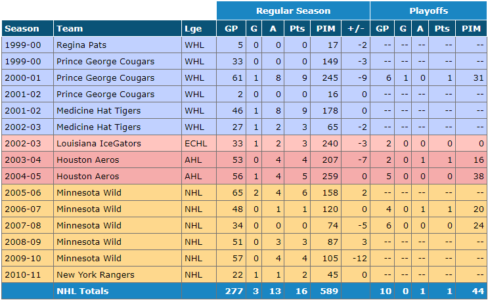