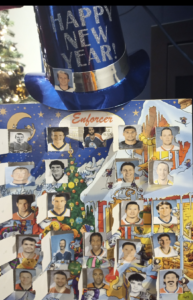 ‘Twas the night before Christmas, when all through the house,

not a creature was stirring, not even a mouse.

But then Rick Jeanneret started yelling,

“AND ANOTHER RIGHT FROM RAY!!!”

And woke up the whole house.

Okay, that may not be the original Clement Clarke Moore poem, but fight fans that have heard Rick Jeanneret’s famous Sabres calls know this version is way better. Rob Ray and Rick Jeanneret were synonymous during the ‘Rayzor’s’ 14 seasons in Buffalo. Ray’s fights were great, but Jeanneret’s calls made them that much better. The Ontario native found his home-away-from-home in Buffalo and entrenched himself in Sabres folklore by fighting over 200 times. The former Cornwall Royal was one of the league’s most patient fighters and had an uncanny ability to wait…wait…wait and then BAM! This patience led to him TKOing some of the toughest guys in the league. I guess patience truly is a virtue worth mastering.

In another ode to the exclusive Deca Dance Club, this tilt between Domi and Ray was one of their first. Ray showcased his outstanding endurance by withstanding ‘The Bald Headed Wonder’s’ initial flurry. The first 10 seconds were all Domi, but you could tell Ray was never worried. He knew the power his punches packed. It’s debatable whether the ‘Rayzor’s’ strategy was to let Domi punch himself out of this fight but, by luck or not, it worked. The turning point of the fight was at about the 12 second mark when Domi stumbled from stepping on a stick and Ray capitalized with two massive right hooks that landed clean to the jaw of the Jets enforcer. It was always fun when these two threw down because they were the same height, weight and fearlessness. That’s a fight fans dream, but the same can’t be said for the linesmen. It’s funny to watch the linesmen skate in to break it up and realize they are still going at it. Then, 10 seconds later, the same series of events. It took nearly 30 seconds for these gladiators to give the linesmen a sliver of light to intervene.  Ray was coming off his career-high 354 penalty minutes and while he never matched that tally again, when Tie Domi came to town, he always added to the total.

It may not be his official nickname, but Dennis “Bon Jovi” Bonvie was certainly livin’ on a prayer when he challenged Rob Ray that Saturday night in Buffalo. The Sabres were pumping the Hawks 4-0, so Bonvie challenged Ray to give his team a spark. Spoiler alert…it didn’t work. Bonvie started the fight strong with a good right hand and a series of jersey-jabs that kept Ray’s huge right hand at bay. The problem for Bonvie was Ray had nothing but time, and displayed his aforementioned patience by carefully picking his spots to toss bombs. After disorienting Bonvie with two big hooks, he slipped inside and landed a banger that buckled Bonvie to the ice. I have a theory that Vince Carter’s famous ‘It’s Over’ motion after the 2000 dunk competition was borrowed from the ‘Rayzor.’ Because Ray did the famous gesture after he dropped Bonvie and the Marine Midland Arena erupted. Buffalo’s passionate fan base is well-known, and Ray embodied that same passion every time he stepped on the ice. Luckily, Bonvie bounced back, but the Hawks big man only played 11 games in Chicago. For less-than-ideal reasons, this one will remain his most memorable. 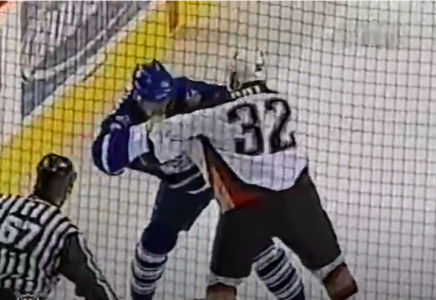 After the night he had in Buffalo, nobody would’ve blamed Alexi Ponikarovsky if he walked in the locker room and said, “thanks for that Bryan!” Why? Well, Bryan McCabe’s late hit on a meaningless offside call ended with Ponikarovsky having to face-off with the ‘Rayzor.’ In this bout, Ponikarvosky and Ray started pushing and exchanging gloved-punches with each other in the scrum. The finally dropped-the-gloves and traded a couple rights each. Surprisingly, it looked like Ponikarovsky was going to be able to keep the Sabres heavyweight at bay with his 4-inch reach advantage. Then, out of nowhere, Ray dropped Ponikarovsky to the ice when he landed a monstrous bomb on Leafs winger’s chin. This fight not only showcased Ray’s power, but his accuracy as well. The ‘Rayzor’ had to pick his shots to avoid cutting or breaking his hand on Ponikarovsky’s visor. After the bout you could see Ray jawing at the Ukrainian native, likely telling him, “I warned you.” Ponikarovsky heeded the warning and never fought Ray again, proving that Alexi Ponikarovsky is a very smart man. 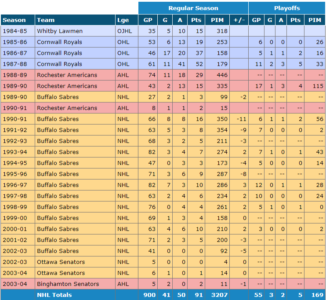 In his early days, Rob Ray had an uncanny ability to get undressed on the ice. Many fans joked that he would have a career as a Chippendale once he hung up the skates. But the NHL put a stop to the strip-show when they implemented Rule 46.13: A.K.A. ‘The Rob Ray Rule.’ This forced the Sabres enforcer and his opponents to have their jerseys tied down or face an ejection from the game. This certainly affected Ray’s fighting style, but the ‘Rayzor’ quickly adapted and became more methodical with his tactics. Besides, with that right hand, it didn’t matter whether he was shirtless or wearing a parka, those punches were deadly. In his post-playing career Ray has become an accomplished author, coach and serves as a color analyst for the Buffalo Sabres. The former Cornwall Royal ended his NHL career with a modest 3207 penalty minutes, which ranks him 6th all-time, one spot behind the G.O.A.T – Bob Probert. There’s a tendency in the NHL to only retire the numbers of the stars, but if you did a survey in Buffalo, there’s no doubt they would love to see #32 hanging in the rafters of the KeyBank Center.