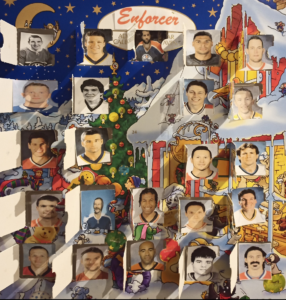 There are some men who have become synonymous with The Moustache. To name a few, this has included Freddie Mercury, Hulk Hogan and Tom Selleck. In hockey, The Moustache carries a certain mystique. To be fair, Lanny McDonald may have the most famous ‘duster’ in hockey, but they don’t call George Parros Mr. ’Stache for nothing. In reality, the former Ducks enforcer’s moustache was so popular in Anaheim that fans were able to purchase “George Parros Moustaches” and, true to form, all proceeds went to charity. Moustache aside, Parros was an intimidating presence every time he stepped on-the-ice. Standing at 6’5” and 224 lbs made every enforcer weary to drop-the-gloves with the Princeton University Alumnus. During his decade in the league, Mr. ’Stache racked up over 150 fights and was rarely on the losing end. As such, Parros’ spot on the ‘Enforcer Advent Calendar’ is well-deserved not only for his on-ice achievements, but his continued work with the NHL as the Head of the Department of Player Safety. There is a code among enforcers and hockey players at-large, which is why the league made a great hire when they brought the former enforcer to keep the boys in line. 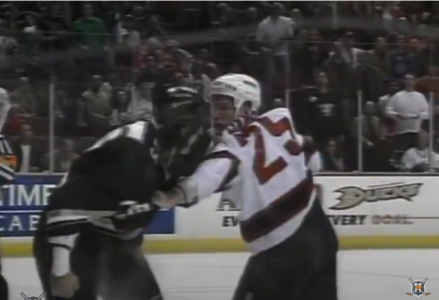 I can appreciate Cam Janssen throwing himself into the crease in an effort to squeeze in a greasy goal and he knew what the response would be. Parros grabbed Janssen as soon as he saw his ‘bold’ move and dealt with it accordingly. As everyone on the ice looked for a dance partner, the cameraman finally found these two heavyweights squaring off. Parros’ height and reach advantage was too much for Janssen as he spun the Devils enforcer off-balance and landed a big left, and an even bigger right. Janssen tried to respond, but was only able to land one or two weak punches. Mr. ’Stache absolutely rag-dolled Janssen and rained down a flurry of hammer punches. So much so, that it looked as if Parros dislocated Janssen’s shoulder with his powerful jerks and spins. Parros was always a class-act so it’s not surprising that he relented the onslaught when he saw that Janssen was visibly injured and unable to defend himself.  The Ducks certainly had an edge about them in ’06 and, combining that grit with a stacked forward group, were able to win the franchise’s first ever Stanley Cup.

There’s no denying that Riley Cote is a tough SOB, but during the 2000s there weren’t many enforcers that could handle Parros’ dominance. Perhaps it was ignorance, Cote’s first battle with Mr. ‘Stache was one he’ll never forget. The two heavyweights squared off at the half-way point of the second period and, while Flyers’ fans were used to seeing their heavyweight skate away victorious, they would leave disappointed after this fight. After a brief stare down, Parros landed a huge right jab flush to Cote’s chin. Credit to Cote for not flinching, but you can tell it stunned the former Prince Albert Raider. Parros followed that bomb up by grabbing a firm hold on Cote’s jersey that ironically benefited him at the end of the bout. The two exchanged some weak punches until Parros was able to shake off his right-elbow-pad and land two big right hooks. Then it happened…Mr. ‘Stache channelled his inner Mike Tyson and delivered a thunderous uppercut that buckled Riley Cote. Honestly, it was an uppercut that hurt just watching it. Thankfully, Parros had such a firm grab of Cote’s jersey that he was able to gently lower him to-the-ice so that he didn’t slam his head on the ice. À la Ryan Reaves Vs Kyle Clifford, this is a class-act that only happens in hockey. With this, although Flyers fans had to watch their enforcer go down, thanks to a natural hat trick by Mike Knuble, they sailed to a 3-0 win. 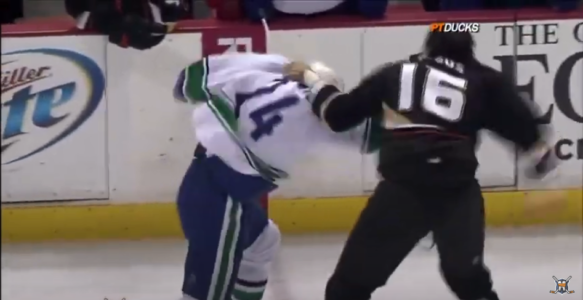 Muhammad Ali fought Joe Frazier 3 times, Ken Shamrock met Royce Gracie 3 times and Sugar Ray Robinson battled Jake LaMotta 6 times. Impressive, but George Parros fought Darcy Hordichuk 11 times! As discussed in The Deca Dance Club the two familiar foes never missed the chance to showcase their skills. This bout was their ‘Deca Dance’ and, as per usual, they didn’t disappoint. Hordichuk had been on the losing end in the majority of their previous bouts, but was able to get some redemption on the Pennsylvania native. The two squared off to start the second period and all technique went out the door. Both warriors just stood and traded big right hands. Parros threw uppercuts and Hordichuk answered with right hooks. While neither enforcer landed any significant blows, the fans at the Honda Center got to watch two legends throw hands with complete disregard for their own safety. The scrap ended when Hordichuk was able to spin Mr. ‘Stache to-the-ice and showed the classic-enforcer grace by not punching his moustache while he was down. Overall, the ‘Deca Dance’ may not have been their best routine, but I can imagine you get pretty familiar with your partner after so many tangos. 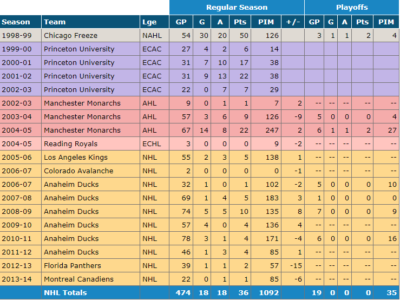 You’d be hard-pressed to find someone that doesn’t like George Parros. That’s why it wasn’t a fluke or some form of nepotism that landed George Parros as the Head of the Department of Player Safety. He was given the position for his outstanding resume that accumulated over 150 fights, countless hits and not a single fine or suspension. That’s like being a professional race car driver who doesn’t have a speeding ticket on their record. Fight fans will also remember the frightening scene when Parros lost his balance and slammed his head against ice in a battle with Colton Orr, but thankfully Mr. ‘Stache was able to recover and live a meaningful life. In addition to his on-ice skill, Parros remains a modern-day Renaissance man with his front-office successes, countless charitable works, and cameo appearances in both Goon: Last of the Enforcers and Amon Amarth’s music video, Raise Your Horns. The role of enforcer may be diminished in the modern-day NHL, but we all know that when tempers flare players take liberties. That’s why, whether on the ice or in the front-office, Parros will always be the enforcer who holds players accountable.