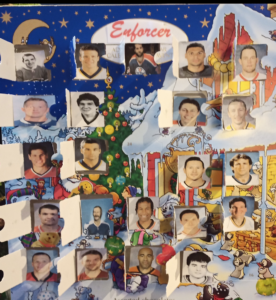 During the 80s and 90s, cocaine use was rampant across all walks of life. At the center of it all: Hollywood and Sports. The deaths of Len Bias and Chris Farley dominated headlines, but the tragic passing of John Kordic shocked the hockey world. The former Montreal Canadiens draft pick battled addiction his entire career, and his alcohol, cocaine and steroid use all contributed to his sudden passing. In addition to being one of the toughest enforcers to ever drop the gloves, Kordic was also a damn good player. Similar to other enforcers on the calendar, he saw fighting as the best path to a successful NHL career. In his first NHL season, the Edmonton native punched his way to a Stanley Cup in ‘86 and didn’t stop fighting until his death at only 27 years old. Addiction robbed fight fans from watching Kordic reach his prime, and his bouts as a youngster suggest he could have dominated the league for years. 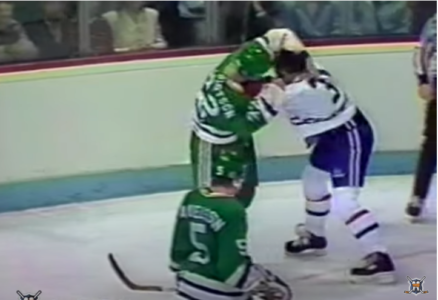 Players know when they get the chance to make the jump from the AHL to the NHL, they have to do something to stand out. Kordic saw his chance to fight Torrie Robertson as his opportunity to impress and show the toughness he brought to the line-up. The Canadiens brass took notice and used their Sherbrooke Canadiens call-up in 18 playoff games, as they cruised to their 23rd Stanley Cup. This bout was inevitable when Kordic face-washed Robertson against the glass, because the Whalers winger wasn’t going to let a rookie get away with that kind of shenanigan. The two warriors started off with a lot of grappling and jostling until Kordic let off two big left hooks. Robertson tried to respond, but ended up missing two overhand rights. The two traded a few more punches until Robertson was able to get Kordic’s jersey off. It looked as if Robertson was in full control, but Kordic was able to slip out of his jersey as they traded two big shots each. It looked as if, in an act of desperation, Robertson grabbed a hold of Kordic’s classic 80s hair. The Canadiens enforcer reminded Robertson you never grab a man’s hair by landing two huge left hands that sent him to-the-ice. While, the fans at The Forum had to endure a Game 1 loss that Thursday night, they left knowing they had a legitimate tough guy in their line-up who could help them win in a rugged Prince of Wales Conference.

Nothing screams 80s more than seeing referees without helmets, fans in suits and those slick Nucks’ jerseys. Craig Coxe accepted Kordic’s invitation to scrap and, while it was honourable that he tossed his lid off before the bout, he ended up paying the price. Even though the Canucks big man stood 3 inches taller and 15lbs heavier than Kordic, Kordic’s left hand was the ultimate equalizer. This tilt took a little while to get going because neither player wanted to be the first to engage. Coxe ended up striking first with a straight right jab to Kordic’s jaw that didn’t faze the Canadiens enforcer. If anything, Coxe just poked the bear, because Kordic responded with 3 huge left hooks. Coxe was able to land a couple good right hands until Kordic got a firm grab on the big man’s jersey. That gave the shorter Kordic the leverage he needed to land a flurry of left hooks that sent Coxe to-the-ice. The Edmonton native’s thunderous left hook was legendary, which is why it was no surprise to see Coxe heading to the dressing room for repairs after the battle. Hockey fans will remember that December 2nd for the fabled 334 Devils fans that braved through 20 inches of snow to watch their team beat the Flames at the Meadowlands. Craig Coxe will remember it as the last time he would ever take off his helmet before a fight against John Kordic. 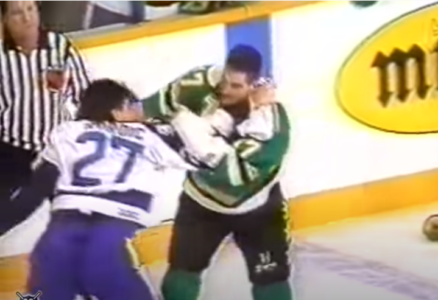 Any real fight fans are envious that they weren’t in the front row of the Maple Leaf Gardens when Minnesota came to town that night. Basil McRae and John Kordic were proven heavyweights and only 11 seconds into the game they gave the fans a show. Kordic was in his first season with the Leafs and knew taking on McRae was the fastest way to endear himself to his new fans. The Leafs enforcer started the bout strong, landing 3 big left hooks with McRae pressed against the glass. Credit to McRae for keeping his composure and responding with 3 good right jabs of his own. The two warriors wrestled for a bit in front of the North Stars bench until they came to an agreement – stand-and-trade. Both enforcers traded about 15 shots before the linesmen seized the opportunity to end the excitement. The deafening roar that the crowd unleashed when the bout ended and the smiles on all the fans’ who were lucky enough to be sitting front row made it clear they were entertained. While the former Canadien only played two and half seasons in Toronto, he quickly added toughness to a Leafs team that has been pushed around far too often. The judges would score this bout as a draw, but anytime you get to start a game with a huge tilt, everybody wins. 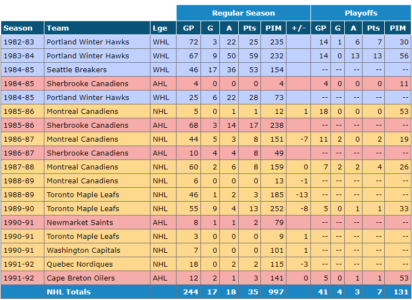 John Kordic’s addiction issues have been well documented. Cocaine and alcohol aside, it was Kordic’s steroid use that was most alarming. The secret was out after he showed up to the 1986 training camp 15 lbs heavier… but nobody did a thing. At the time, the NHL maintained an archaic drug policy that upheld more of a ‘don’t ask, don’t tell’ mindset than an actual policy. This fuelled Kordic to spiral out of control until everything came to a head on August 8, 1992. The police were called to a Québec hotel room after the front desk believed Kordic had overdosed. Following a physical struggle with the police, the former Canadiens draft pick died in the ambulance on the way to the hospital. In hindsight, Kordic’s death could have been avoided if the league had implemented the proper protocols. Former players have told stories about coaches catching Kordic and a few other teammates doing cocaine on road trips, saying, “I didn’t see anything” and leaving the room. We are all responsible for our own decisions in life, but it’s heartbreaking that the world lost one of the toughest enforcers at such a young age