Not only are we are nearing the end of the ‘Enforcer Advent Calendar,’ but also this crazy year. Every fan has a different player who they hold near and dear to their heart, meaning that there are so many more warriors that could have made this list. That’s the beauty of sport, we all have a different favourite. Some think Gretzky, others – Mario Lemieux, the older generation may tell you Gordie Howe, while the younger generation argues for Sidney Crosby. Regardless of who your favourite is, we can agree that all these men deserve to be celebrated for their sacrifices. Frankly, enforcers deserve a little spotlight for their accomplishments too because they are far-too-often the unsung heroes. So, let’s celebrate some legends… ‘tis the season, after all. 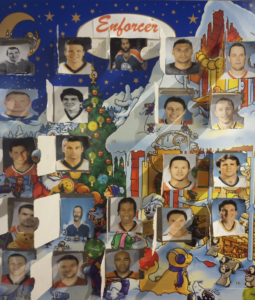 For over a decade, Donald Brashear struck fear in the hearts of his NHL opponents. While the undrafted enforcer stood at 6’3” and 237 lbs, by all accounts, he was one of the strongest players to ever play in the league. Brashear dominated during his time in Vancouver and still holds the season-high penalty minutes record when he tallied 372 during the 1997-98 season. As most enforcers are, Brashear was a fan favourite in Vancouver but when he got traded to Philadelphia in 2001, Flyers fans saw the ghosts of ‘The Broad Street Bullies.’ Philly is a gritty city and Brashear fit the mould to a tee, and is arguably the toughest enforcer to have last donned the black and orange. Brashear was always a warrior, but he was intelligent with his tactics. That’s why during the lockout year of 2004 he improved his fighting skills by training with former heavyweight champion ‘Smokin’ Joe Frazier. Flash-forward 7 years – Brashear fought in a Ringside MMA match that ended in only 21 seconds after Brashear easily TKOed his opponent. MMA opponents may not have been familiar with Brashear’s left-hand, but if you asked around the NHL, they knew all too well about the lethal southpaw. 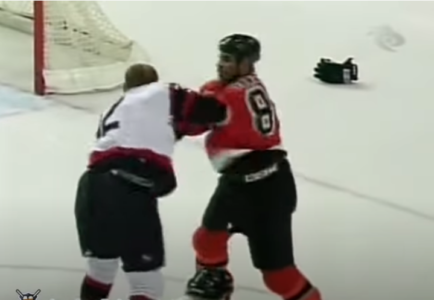 Any fans that left the Wachovia Center early in hopes of avoiding traffic were certainly kicking themselves that Friday night. The game was relatively quiet until the very end when, with less than 3 minutes remaining, an all-out brawl erupted, and 54 penalties were issued. Who was at the center of it all? Brash of course. But to be fair, it was Rob Ray who instigated this one when he gave Brashear a quick sucker punch. The Flyers enforcer responded in kind with a few of his own. Brash was too big and strong for Ray and manhandled him with a flurry of hammer punches to the back of Ray’s head. The undrafted enforcer followed that up with two big left hands and a huge uppercut as he was ripping Ray’s jersey off. Fight fans know Ray loved getting undressed on the ice, but he wasn’t so fortunate in Philly. The Senators tough guy did his best in this bout, but was left battered and bloodied from a dominant Brashear performance. The domination was so much that Todd Simpson felt the need to try to get some redemption for his fallen teammate. Simpson jumped Brashear as he skated to the bench, but the two were never able to get loose because of the pile of bodies on the ice. The noise from the Philly fans was deafening during the melee that even saw the goalies drop the gloves. The Flyers beat the Senators down on-the-ice and the scoreboard. Their 5-3 win felt like an ode to “The Broad Street Bullies’ and the fans loved every minute of it.

You don’t get a much better nickname for a fighter than Eric ‘The Hand of God’ Godard. But nicknames don’t win fights. This was one heck of a battle between two absolute giants. The Flyers had dominated the Islanders all night and with a 5-1 lead, Brashear didn’t need to engage with Godard, but he wanted to give the fans a show and delivered. The two squared off at centre ice and Brashear started the dance with a quick jab that landed square on Godard’s nose. Godard responded with a couple good right punches that knocked off Brash’s helmet. It looked as if ‘The Hand of God’ was going to reign supreme when he landed 3 big right hands, but Brashear was never one to go down easy. Finally getting Godard’s helmet off, he landed two massive left hands that clearly rocked the Isles’ enforcer. After some jostling, Brash landed a lightning quick left hand that forced the two heavyweights to tumble to the ice. You can tell how strong Brashear was, but it was his quickness and accuracy that truly set him apart in the tough guy rankings. Although Brashear had to head to the dressing room for repairs on a decent gash above his eye, he’d proven that even ‘The Hand of God’ couldn’t drop him. 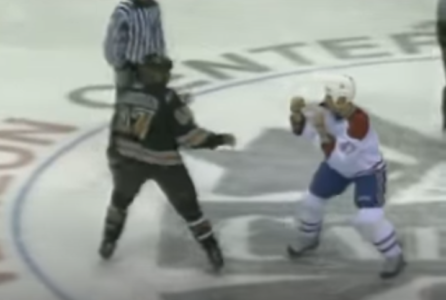 Be careful what you wish for Aaron Downey. The former Providence Bruin challenged Brashear at centre ice and his invitation was reciprocated by the heavyweight. Brashear was in his first season with the Capitals and had fought the night before, but he couldn’t say no to the team he started his career with. The bout started off with both fighters waiting for the other to make the first move. Downey finally threw the first punch, and landed a clean right to Brash’s chin. That was the only one he landed. Brashear exerted his dominance by using his leverage to force Downey’s head down and launched 4 clean uppercuts to the Canadiens tough guy. All the credit in the world to Downey for trying to reply back but doing so just left him vulnerable to more left hooks. Those 30 seconds must have felt like an eternity, because Brashear landed about 24 punches during this bout. Near the end you can tell that Downey was just trying to hold on for dear life, and frankly, I would have done the same. Brashear was only in Washington for 3 seasons, but he played an integral role in protecting Alexander Ovechkin during his 2007-08 breakout year. The Russian sniper tallied 65 goals and 112 points and, while Brashear wasn’t getting any assists on those goals, his presence allowed the Caps’ superstar to play without fear of getting attacked. I mean, who in their right mind would go after Ovie’ when you saw Brashear waiting to hop over the boards? Not this guy. 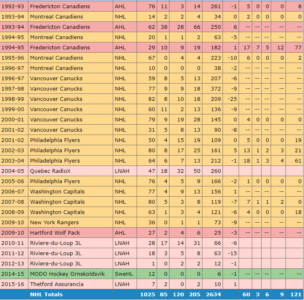 For many fans, Brashear will be remembered for his run-in with Marty McSorley during the 1999-2000 season. McSorley and Brashear had fought earlier in the match and after some trash talking McSorley wanted round 2. Brashear didn’t accept McSorley’s invitation so the Bruins enforcer lashed out with a vicious slash that struck Brashear’s right temple. As he fell to the ice his helmet was ajar, Brashear’s head slammed directly on the ice. It was disgusting to watch as both a hockey fan and human. Brashear would eventually recover from the attack and go on to have a successful career, while McSorley would never play in the NHL again. This shouldn’t be Brashear’s footnote in history because it was a cowardly attack and Brashear is the furthest thing from a coward. The undrafted enforcer grinded his way into the league and fought hard for 5 different teams in his career. Recent legal troubles and a news story about Brashear working at a Tim Horton’s owned by his former teammate Pierre Sévigny has thrust the former enforcer back into the public eye. Hearing about Brashear’s employment, it was saddening to read the disgusting comments people directed at the storied enforcer. Our need to build athletes up while they are playing for our teams and then destroy them when they aren’t is a societal mindset that needs to shift. We have to celebrate and cheer for the success of our athletes, whether that’s on-the-ice or off. Brashear always did his job to the best of his ability and there’s no doubt that Tim Horton’s has a damn good employee working for them.