Hockey Fights is an entertainment site with no direct affiliation to the National Hockey League, its teams, or NHLPA
Home > Originals > ‘Deca Dance Club’ – George Parros vs Darcy Hordichuk

Every sport has their exclusive club. Football has the ‘2000 Yard Club,’ Baseball the ‘Triple-Crown Club’ but, in the greatest game, it’s the ‘150-Point Club,’ the ‘80-Goal Club’ and the ‘1000-Assists Club.’ The likelihood an enforcer gets into one of these clubs is low but – who cares? – they have their own prestigious club: ‘The Deca Dance Club.’ This exclusive club is reserved for those that have fought each other at least 10 times in the NHL. And don’t worry, there’s no need to dress-up, know the bouncer, or be a V.I.P. to get in this dance club. All they ask is for you to stand up for your teammates, fight your hardest and respect your opponent. Oh, and the last condition to get into this exclusive club: a ton of heart. Simple. 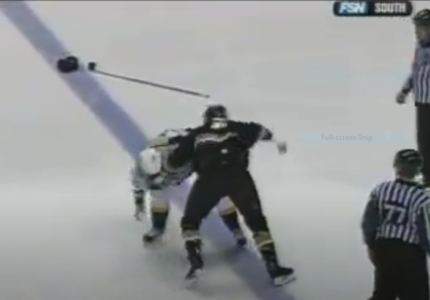 That Sunday night in the Honda Center was definitely a learning experience for Darcy Hordichuk. George Parros was no stranger to using his 6’5” frame to keep his opponents at a distance and inflict maximum damage when they couldn’t. Standing at only 6’1”, meant Hordichuk, needed to get inside on Parros to land a meaningful strike. Unfortunately, on March 4th 2007, Hordichuk wasn’t able to do so and was fed punches by Parros in a spirited battle. The highlight? When Parros shook off his elbow pads – nobody likes when their punches are restricted! Sans-elbow pads meant Parros was able to get off a few more shots before spinning Hordichuk to the ground. This fight may not have been the reason the Ducks went on to win the 2007 Stanley Cup, but letting a Western Conference rival know that the top enforcer lived in Disneyland sure didn’t hurt. 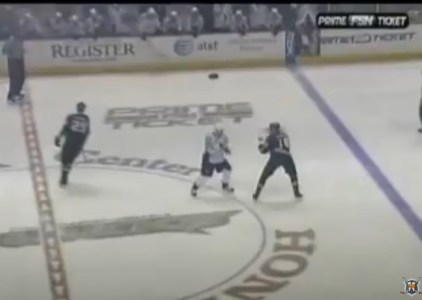 It’s only fitting that the same night that ‘No Country for Old Men’ won best film, two young men danced again in Anaheim. Heading into the battle with Nashville, Parros boasted a league-leading 12 fighting majors. Hordichuk was glad to make it 13. When the two faced-off, mid-ice it wasn’t because of a cheap hit or slash, it was likely because Hordichuk wanted a little redemption after their last tilt. And, he got it. Some may call this fight a draw but Hordichuk was finally able to get inside on Parros, feed him a few shots and spin him down… Parros DID pop up and land an uppercut as Hordichuk went down. Cheap shot? Maybe. But, with all that adrenaline pumping through their veins, I can only imagine these guys were on auto-pilot when they were throwing those haymakers. Regardless, while some may give it to Parros, Hordichuk deserves credit for fighting the league-leading fighter. 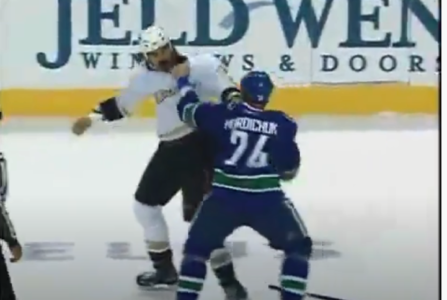 New uniform? No problem. Hordichuk seized the opportunity to endear himself to ‘Nucks fans by dancing with an old foe in a pre-season battle. Fans know pre-season excitement tends to be minimal – but that wasn’t the case for this game. The GM place was rocking when Hordichuk started the first of his 30 fights in one of the most beautiful cities in the world. The bout may have been less than eventful but it was still significant because, in front of his new team’s home crowd, Hordichuk challenged one of the best fighters in the NHL to a scrap in a … pre-season game. Draw or not, Hordichuk made sure the 08’ season started off with a bang. 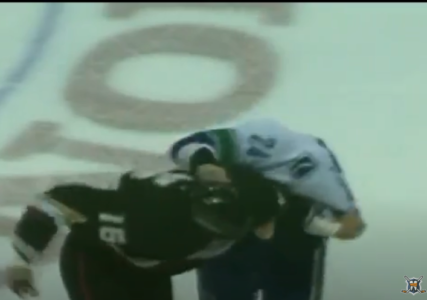 Hockey on Halloween is guaranteed to be a spooky time. On October 31, 2008 this didn’t just mean a good scrap, it meant a legendary 26-shooter shootout. Parros and Hordichuk may not have been involved in the shootout but they added a jolt to their team following Mike Brown’s hit-from-behind. Even with having his jersey pulled over his head for 95% of the fight, Hordichuk was able to land a few on Parros’ chin, including a finishing right-hand to end it. This was definitely a confidence boost for Hordichuk and a rallying point for the Canucks. They had a fighter that could protect the Sedin twins against a heavy Anaheim team and who helped lead the Canucks to 3rd place in the Western Conference. 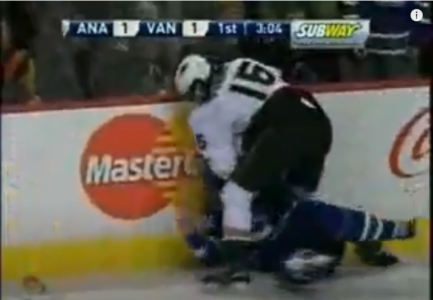 Merry Christmas Todd Marchant courtesy of Darcy Hordichuk! A clean hit next to the Canucks bench by Hordi on Marchant left Parros no option but to jump-in. The scrap was quick and Hordichuk got held, likely in a similar way he did when training with Chuck Liddell of the UFC during the off-season. Hordichuk’s willingness to train with an MMA legend exemplified his drive to be the best enforcer in the league. Even though he came up short this round, it added more kindling to the heated rivalry between Parros and Hordichuk. 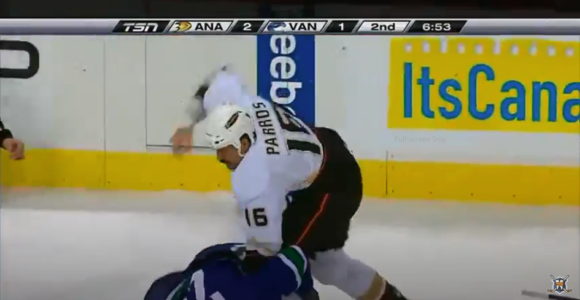 Their “dances” were hot, and fans were praying that Hordichuk and Parrous wouldn’t be able to stay away from each other for an entire year. Whelp! They got their wish after Hordichuk nearly dumped Parros into the Canucks’ bench. Hordichuk wanted to fight before the whistle blew but Parros waved him off, so Hordi took matters into his own end and initiated the fight by running Parros. The battle may have been quick but Hordichuk was letting it be known that anytime, anywhere, and no matter what the circumstances were, he was willing to throw big hits and back them up by dropping his gloves. The judges would likely call this one a draw again, but if Hordichuk wasn’t on Parros’ radar before, he was now.

New decade or not, this rivalry was bound to keep going. Pre-season fights are rare but Parros and Hordichuk had shown they had no problem fighting anywhere, anytime. This would be the first, and arguably one of their best, of four fights that christened the new decade. The tilt lasted nearly a minute with both heavyweights landing haymakers. Having been to pre-season games before, I would have given anything to jump start a great night out on the town with a scrap like this on a Saturday night home-game. The Canucks walked away with a 4-1 victory, which many saw as the start to their President’s trophy run, before they fell short in the Stanley Cup Finals. 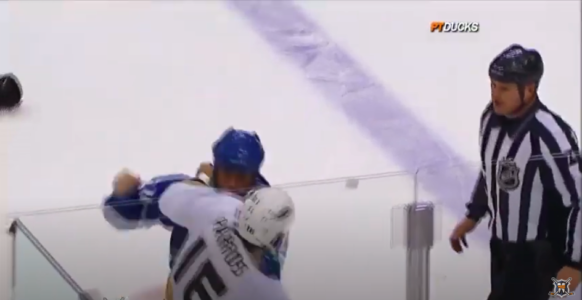 Being only one month away from the playoffs and with a potential second round matchup on the horizon, both enforcers felt the need to make March 24th a memorable one. Hordichuk continued the trend of being the instigator in the majority of these scraps when he laid a big hit on the Ducks D-man that forced Parros to dance. These monsters exchanged countless blows before Hordichuk was able to pin Parros against the glass. There were some words exchanged at the end of the fight that I’m guessing wasn’t, ‘how are the kids doing?’ because they proved they weren’t done with each other that rainy night in Vancouver. 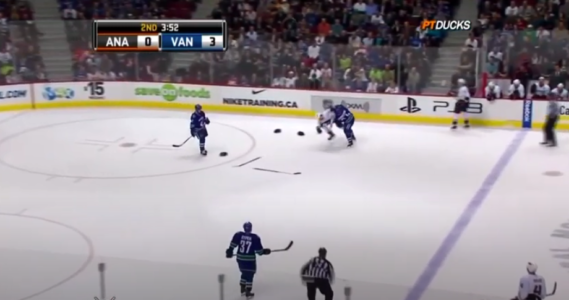 It felt like the 80s when these heavyweights entered their second fight in the same game. Unfortunately for the fans, the linesman made sure the bout was shortened by jumping in the second Parros lost his balance. Whether it was because he felt like Hordichuk got the jump on him or if he felt the referees intervened too quickly is uncertain, but the frustration on Parros’ face was clear. Regardless, Parros wanted to keep the fight going and the grin on Hordichuk’s face once the “dance” was over suggested he was more than willing to reciprocate. The fans that missed the old’ time hockey game got a blast from the past that evening in March. No fortune teller was needed to predict these two jumping at the chance to square off again. 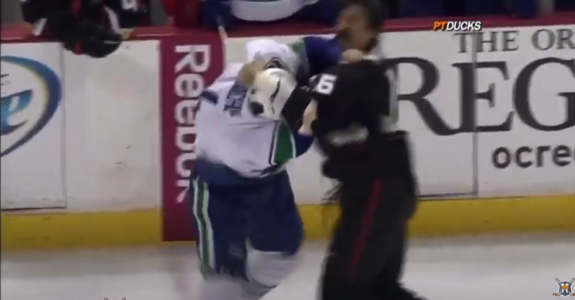 The notion of fighting someone 10 times is foreign to all other sports. This doesn’t even happen in boxing or MMA – only in hockey. It took only 9 days after their double-dip to throw down again. When Parros and Hordichuk faced off for the 4th time in the 2010 season and the 10th time in their career they threw bombs at one another. Parros knew he needed to add an uppercut to his arsenal to defeat the in-your-face fighting-style of Hordichuk and he put his skills on full-display in the Honda Center. Parros did land several uppercuts but Hordichuk was also able to land a few jabs before he wrestled the Pennsylvania native to the ground. The caveat to this fierce rivalry was that respect always reigned supreme. This was demonstrated at the end of their Deca Dance when both warriors tapped each other on the shoulder pads, gave a nod and skated to the penalty box. While we’re all entitled to our opinions on fighting and its outcomes, we can’t question the respect that these gladiators had for each other. Even though they fought 10 epic times in the span of three years, it wouldn’t surprise me to see them having a beer together after the game.