Hockey Fights is an entertainment site with no direct affiliation to the National Hockey League, its teams, or NHLPA
Home > John Chandler (Page 5)

Early Fights Give Bruins an Edge

Fights aid Bruins in team unity, wins That, according to Andrew Ference and his teammates, is what made the opening fights and physicality worth it. “The fights are one thing, but after the fights, to… Read more 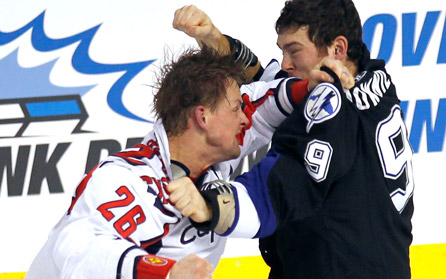 As the playoffs draw closer, games are of more importance and in turn, things start to heat up. The adage was never more appropriate than in describing Friday's Caps–Bolts showdown between the two division rivals,… Read more

Boogaard Back to Minny for Treatment

Rangers’ Boogaard working with doctor in MInnesota The Post has learned that Boogaard, who has been sidelined since taking a Matt Carkner punch to the face during a fight in Ottawa on Dec. 9, is… Read more

The Fighter: Shawn Thornton’s fists say it all Naturally, Thornton didn’t want to talk about his having “won” his fight with Barch. “A fight’s a fight,” he said. “Whatever. Some guys did well. I don’t… Read more 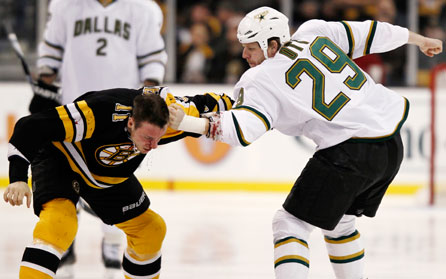 Remember the last time the Stars visited the Bruins in Boston? November 1, 2008. Three fights to end the game and a combined 146 penalty minutes. Not too shabby. Guess what? They topped that. Three… Read more 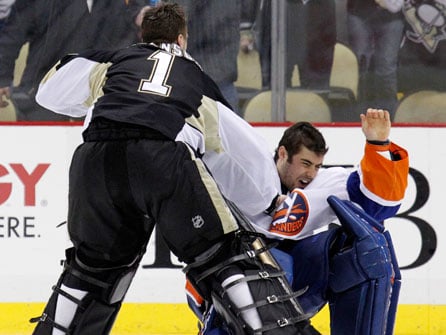 A scrum at the end of Isles–Pens gave us our first goalie fight in over three years. Matt Cooke and Rick DiPietro collided, seemingly on purpose from both ends, with seconds left, causing Matt Martin… Read more 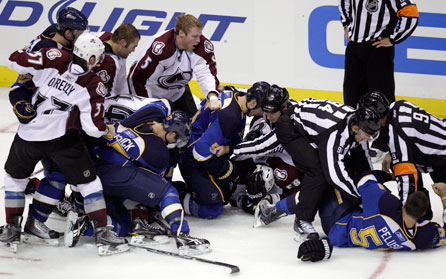 The All-Star break is over and the NHL has wasted no time returning to action, scheduling thirteen games for Tuesday. Among them are a divisional battle between the Pens and Rangers and a Western clash… Read more

As we spoke about last week, it was a rookie against veteran matchup when Kyle Clifford tried his hand against Shawn Thornton. It was also a very good fight. Other fights considered: Zenon Konopka vs… Read more