Hockey Fights is an entertainment site with no direct affiliation to the National Hockey League, its teams, or NHLPA
Home > John Chandler (Page 4) 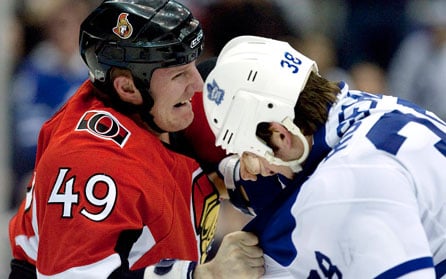 Francis Lessard made sure that his first NHL regular season game in over five years was going to be a memorable one. Lessard hooked up with a familiar foe in Jay Rosehill during Saturday's Leafs–Sens… Read more 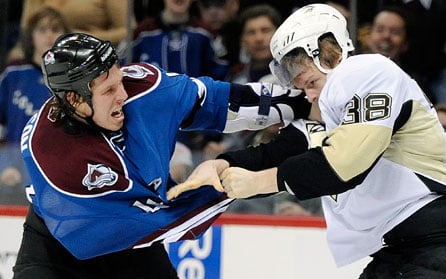 After one of the busiest weeks in recent memory, things have grinded down to a slow halt, with a total of six fights coming out of the last four days of scheduled games. Thursday saw… Read more 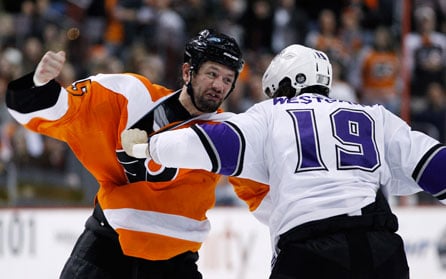 The Kings are a relatively young team for the most part, especially in the fighting department. Following the departures of Raitis Ivanans and Sean O'Donnell, rookies Kevin Westgarth and Kyle Clifford have been asked to… Read more 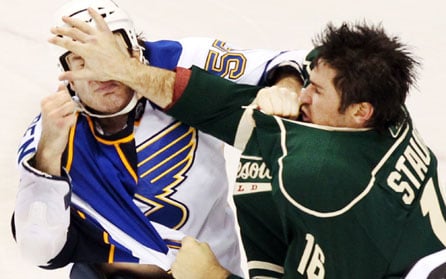 The past week in the NHL has been crazy to say the least, so it's not surprising that Saturday was somewhat tame compared to the last handful of days. Still, that doesn't mean that the… Read more 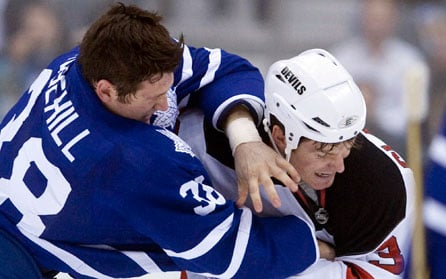 Four fights came from Thursday's slate of games and all were relatively even. In the first period of Devils–Leafs, David Clarkson and Jay Rosehill dropped the gloves at the end of a shift and still… Read more 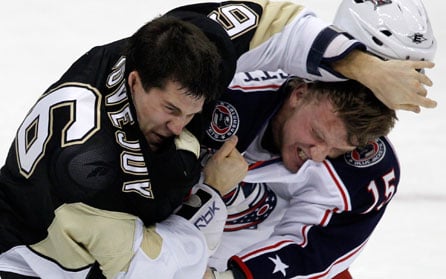 Eric Godard participated in his first scrap following surgery to repair his orbital bone, dropping the gloves with Jared Boll during Jackets–Pens on Tuesday. It was a bout that had to happen. In the middle… Read more 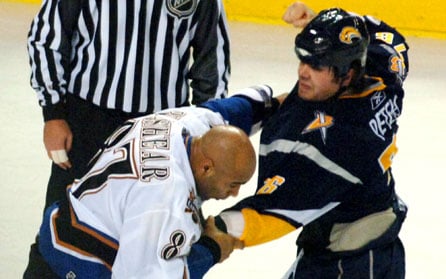 After clearing waivers earlier today, it looks as if Andrew Peters has decided to hang them up: Tough-guy left winger Andrew Peters cleared waivers and plans to retire. His agent, Steve Bartlett of Pittsford-based Sports… Read more 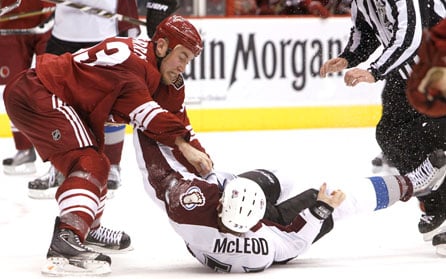 Monday produced two fights, and each transpired for a different reason. To put it bluntly, Chris Neil flattened Henrik Sedin during the first period of Sens–Canucks. Neil was greeted by Daniel Sedin, but it was… Read more

The three fights in four seconds between the Stars and Bruins were enticing, but Brent Johnson's TKO of Rick DiPietro takes the cake this week. Other fights considered: Krys Barch vs Shawn Thornton Feb 3,… Read more 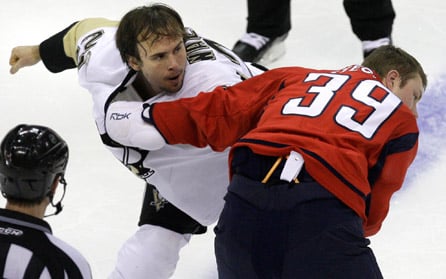 The Caps and Pens met for the first time since the Winter Classic on Sunday, which means that it's also their first meeting since David Steckel's collision with Sidney Crosby, who is likely to remain… Read more