Hockey Fights is an entertainment site with no direct affiliation to the National Hockey League, its teams, or NHLPA
Home > John Chandler (Page 3) 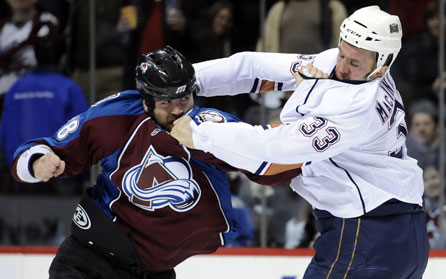 The weekend has passed and we were left with a few heavyweight bouts that turned out to be pretty entertaining. Steve MacIntyre provided a ton of offense in his clash with David Koci during Saturday's… Read more 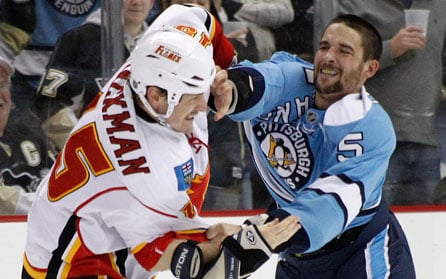 With 65 fighting majors, the Penguins are sitting comfortably atop the team FM leaderboard for now, although a trio of teams (the Blues, B's and Ducks) will likely give them a run for the top… Read more 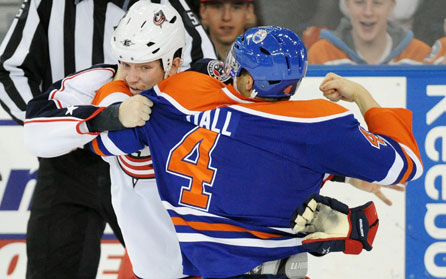 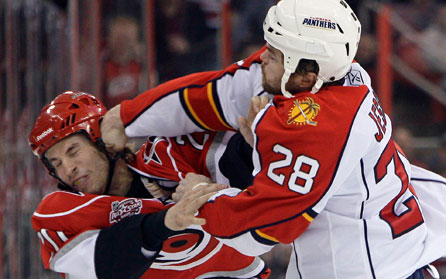 After moving around and dropping the gloves in the minor leagues for years, former first-round draft pick Hugh Jessiman has finally made it to the NHL. Unfortunately, he was shipped back to Rochester this afternoon,… Read more 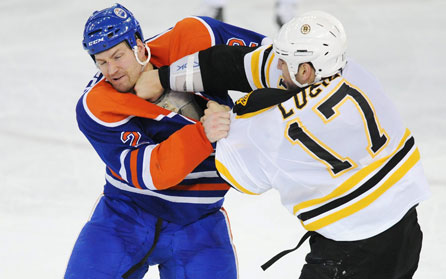 The past few days have seen a bit of a theme – the old against the new. Monday's only fight featured John Scott getting the instigator package and scoring a decisive win over Brad Staubitz… Read more

Tanner Glass finds himself involved in a second “FOTW” this season, this time against B.J. Crombeen in the first-ever meeting between the two. Other fights considered: Milan Lucic vs Jim Vandermeer Feb 27, 2011 Nolan… Read more 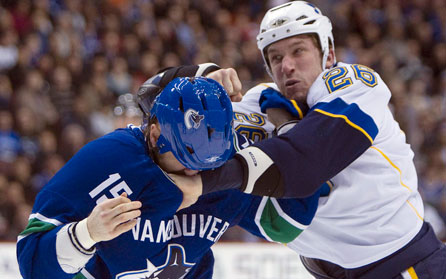 Thursday only produced two fights, but both were fairly notable. B.J. Crombeen is quietly having his best season of his career, fighting-wise. His first-ever meeting with Tanner Glass during Blues–Canucks last night was a good… Read more 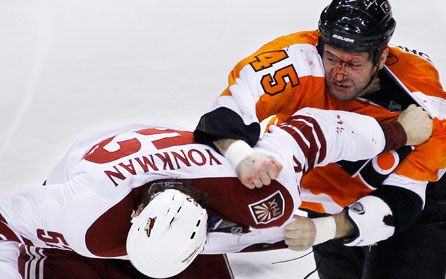 A handful of faces from past seasons have dropped the gloves this week, none more surprising than Francis Lessard, who continues to see playing time for the Sens and got into a quick scrap with… Read more

Francis Lessard is making the most out of his surprise return to the NHL and certainly gave his all in an exciting scrap against Jay Rosehill this past week. Other fights considered: George Parros vs… Read more