Hockey Fights is an entertainment site with no direct affiliation to the National Hockey League, its teams, or NHLPA
Home > Jason Feigel (Page 3)

Andrew Desjardins and His Long Road to the NHL

Crossroads lead former Worcester Shark Andrew Desjardins to Blackhawk success BOSTON — Andrew Desjardins has negotiated his way through the back roads and turnpikes of pro hockey without the benefit of a rearview mirror. Desjardins… Read more

Thornton Happy Not to Retire Yet

Florida Panthers’ Shawn Thornton ‘very happy to get’ extension DENVER Shawn Thornton wasn’t sure he would get a chance to play next season. If a contract didn’t come, he said, so be it. “I was… Read more

Oilers Don’t Want to be Pushed Around

Oilers focused on ‘team toughness’ as rookie Connor McDavid returns An imposing 6-foot-4 left winger, Luke Gazdic is ready to answer the call when McDavid gets rough treatment. “My job is to make sure Connor… Read more

May and Ray provide an entertaining 1-2 punch on Sabres’ broadcasts Longtime teammates on the ice, Ray and May are in their third season as colleagues on the Sabres’ television broadcasts. They add spice to… Read more

Reaves says New Jersey’s Tootoo had retribution coming “It was a dirty hit on Jaskin,” Reaves said. “I see Tootoo has (Kevin) Shattenkirk, which he doesn’t think is a mismatch, but in my head, I’ve… Read more 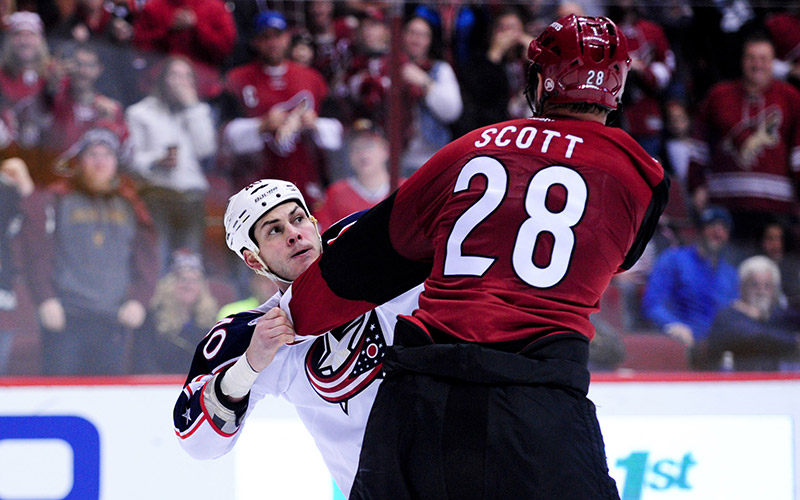 Fans voted John Scott into the All-Star game. He's confirmed going. Whether it's all in good fun, or if it tarnishes the NHL's image is being debated. There have been a myriad of reactions to… Read more

Peluso branching out “I need to continue to prove it. I’m going to continue to try and grow my game,” said Peluso. “(Fighting) is a part of my game that I’ve always brought and it’s… Read more

America’s Big League Trash Talkers Last June, Avery told the Players Tribune: “… To keep my job. I needed people to hate me. I needed players to come after me in order to stay motivated.”… Read more

Scott: “The guys who say I’m just a room guy, I guess I am, but (expletive), I’m a good hockey player, too,” GLENDALE, Ariz. — In the oversimplified court of public opinion, Coyotes forward John… Read more