Hockey Fights is an entertainment site with no direct affiliation to the National Hockey League, its teams, or NHLPA
Home > Originals > 2021 Hockeyfights Playoff Preview – West Division

Welcome, ladies and gentlemen to one quarter of the penultimate hockeyfights preview of each of the first round matchups with a hockeyfights angle.

If you would like to check out our other division previews, they are coming:

The champs are here. NOT ONE of the West division teams had less than double-digit fights this year. I am extremely here for this division in general. A real shame is we have to break it up next year.

Between these two teams, there has only been one fight:

Robert Bortuzzo vs Liam O’Brien from the St Louis Blues at Colorado Avalanche game on Apr 3, 2021 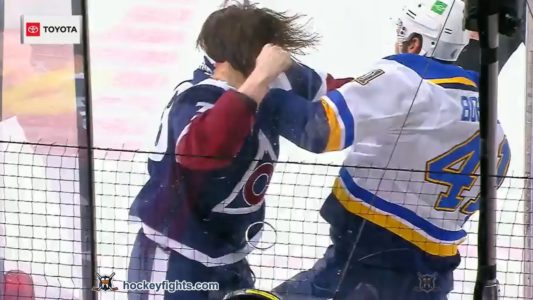 Two teams playing angry, just not so much anger directed at each other. The potential is there for the Avs to ice some good young tough kids with the likes of Daniel Renouf and Liam O’Brien. That said, lining up against the names of Kyle Clifford, Robert Bortuzzo and Brayden Schenn, they (the Avs) may just opt to try and out skill the bruising Blues.

Dream Fight: Liam O’Brien vs Brayden Schenn – I really like what Liam has brought to his fights this season, especially against Bortuzzo and size difference between he and Schenn is negligible. Could a be a fun one, and is honestly doable.

Danimal rating: I will keep one eye on this one just because of the division.

Between these two teams, there has also only been one fight:

Nicolas Hague vs Marcus Foligno from the Vegas Golden Knights at Minnesota Wild game on May 5, 2021 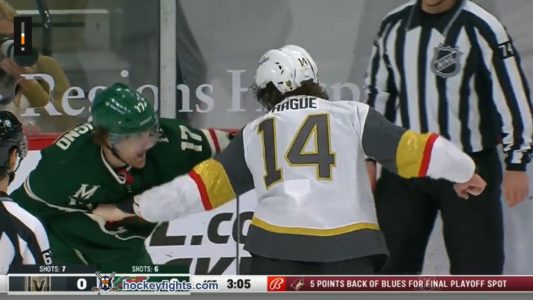 The guys over at Dropping the Gloves were kind enough to get Ryan Reaves on the podcast this last week, and the man they call Reavo was able to speak to this matchup and how he has been taking notes:

Inject this into us right before the playoffs. @reavo7five getting together with @johnscott_32 is always good listening but this one hits special. @dropping_gloves is must subscribe podcast material. Full episode here: https://t.co/PiTnA7m4gW pic.twitter.com/QcutZhqAxo

We are engaged and listening Minny/Vegas.

Dream Fight: Ryan Reaves vs Marcus Foligno – Has it happened already? Sure. But now, thanks to that interview, it sounds like we could be in for a round 2 of sorts and I am here for it.

Danimal rating: Minny running the Knights show a bit at the end of the season has me thinking this is going to be fun

Next up we head to the Central, a division with one matchup we have never seen before this, and that could provide some entertainment.